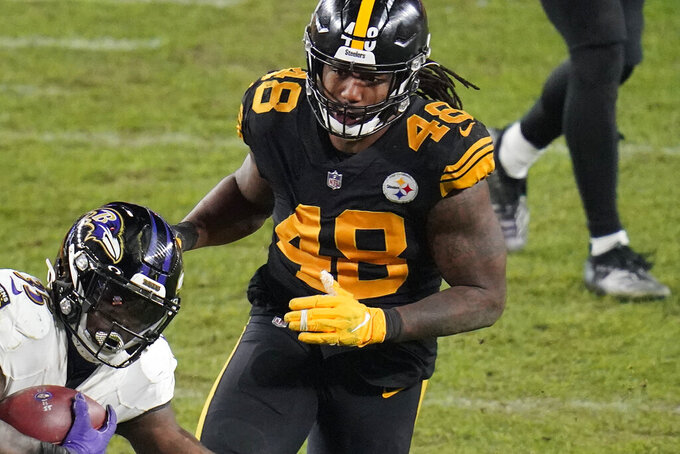 FILE - In this Dec. 2, 2020, file photo, Pittsburgh Steelers outside linebacker Bud Dupree (48) defends as Baltimore Ravens running back Gus Edwards (35) carries the ball during the second half of an NFL football game in Pittsburgh. Dupree, the Tennessee Titans’ prized free-agent offseason signing, made his practice debut on Friday, Aug. 6, 2021, after passing a physical and departing the team’s physically unable to perform (PUP) list. (AP Photo/Gene J. Puskar, File)

The Titans hope he's that conspicuous all season long.

Dupree, the Titans’ prized free-agent offseason signing, made his practice debut on Friday after passing a physical and departing the team’s physically unable to perform (PUP) list. He took part in stretching and individual drills and also participated in a play or two during team drills.

It was a big moment for the team and for Dupree, who tore his anterior cruciate ligament last December against the Baltimore Ravens while with the Pittsburgh Steelers.

“Everybody was saying, `Welcome back,’” said Dupree, who signed a five-year deal with the Titans valued at $82 million last March.

“They’re excited, just like I’m excited. I ain’t played football since December, so it’s exciting to me, just to do the things they’re allowing me to do right now. It’s fun. I love this game. I’m excited to be on the Titans.”

The Titans expect Dupree, 28, to put some teeth into a pass rush that finished 30th in the league last season with just 19 sacks. Dupree made 39 1-2 sacks in his six seasons with Pittsburgh, including 19 1-2 in 27 games over the past two seasons. He added 24 tackles for loss over that same span and six forced fumbles.

“It’s always good to get guys back out there,” Titans coach Mike Vrabel said. “I thought it was good to get him out there for the jog-through, some (individual work). We’ll see how he feels, and keep progressing him along here as we work our way through camp.”

Dupree's challenges moving forward are as much mental as physical, as he transitions to a new team for the first time since Pittsburgh drafted him in the first round in 2015 from Kentucky.

“The skill set comes back,” said Dupree, 6-foot-4 and 269 pounds. “I’ve been working this whole offseason, even when I was hurt, doing my skill development things.

“But my mental (development) is the thing. You have to make sure you can go out and fly around. That’s the new playbook, the new communication these guys are bringing in. Getting used to my teammates. Knowing what my teammates will do. That’s what we need to be on the field for. That’s the most important part.”

Dupree said he hopes to be ready for the Titans’ opener Sept. 12, when they host Kyler Murray and the Arizona Cardinals.