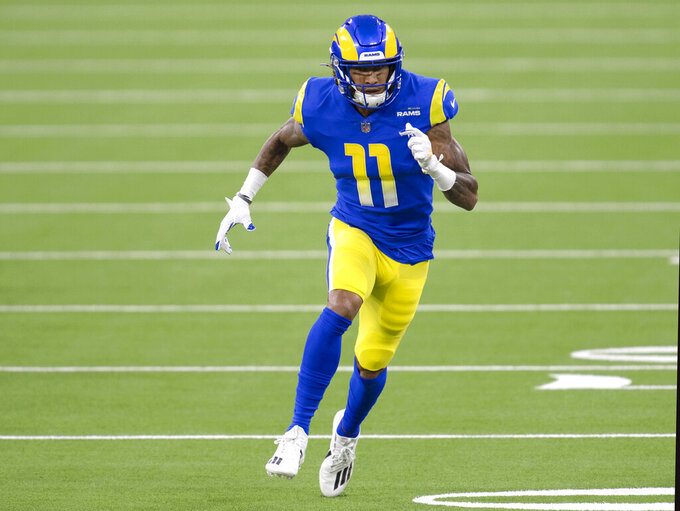 FILE - Then-Los Angeles Rams wide receiver Josh Reynolds (11) runs a route during an NFL football game against the Chicago Bears in Inglewood, Calif., in this Monday, Oct. 26, 2020, file photo. Reynolds looked at his offers and saw plenty of opportunity in Tennessee and an offense anchored by the NFL’s back-to-back rushing leader Derrick Henry. He could not pass up the chance at plenty of one-on-one pass routes. (AP Photo/Kyusung Gong, File)

NASHVILLE, Tenn. (AP) — Josh Reynolds looked at his offers and saw plenty of opportunity in Tennessee with the Titans.

A high-powered offense anchored by the NFL’s back-to-back rushing leader Derrick Henry with a veteran quarterback in Ryan Tannehill who throws the ball down the field regularly. Reynolds couldn't pass up the chance to show exactly what he can do in this league.

“I felt like I can kind of just bring that different piece to help the Titans,” Reynolds said Thursday. " Go above and beyond what they’ve been doing ... I’m hoping I can bring that and help them continue to win.”

The Titans signed Reynolds to a one-year deal that will allow him to hit the market again in a year. He should get a chance to catch plenty of passes with Tennessee losing two of its top three pass catchers to free agency.

Corey Davis had a career-high 65 catches for 984 yards and five touchdowns and now is with the New York Jets. Tight end Jonnu Smith ranked third with 41 receptions for 448 yards, and he ranked second with a career-best eight TDs. He's now with the New England Patriots.

Reynolds is a big receiver like Davis at 6-foot-3 and 196 pounds. A fourth-round pick by the Rams in 2017 out of Texas A&M, Reynolds is coming off his best season yet. He had 52 catches for 618 yards last season and two TDs. He has averaged 12.8 yards per catch in his career.

He also hasn't missed a game through his first four seasons, a streak of 64 games that is tied for the third-longest active streak among wide receivers.

Reynolds said he's looking forward to playing with Pro Bowl receiver A.J. Brown. Reynolds sees his game being similar to Davis. At Texas A&M, he had 164 catches for 2,788 yards and 30 TD catches, and the question he faced coming out of college was being able to catch the ball in the intermediate game.

“With the Rams, that's a lot of what I did over there. They had me doing a lot of the zone-blocking and stuff," Reynolds said. “Seeing how the Titans operate in their offense, I know I am going to have to be down there and doing the nitty gritty blocking and stuff, but that's ultimately what I am used to and ready to bring it.”

Tennessee tied for second with 396.4 total yards and was 23rd in passing with 228.3 yards a game. Henry became the eighth man in NFL history to run for at least 2,000 yards, while Tannehill threw for a career-best 33 TDs and 3,819 yards.