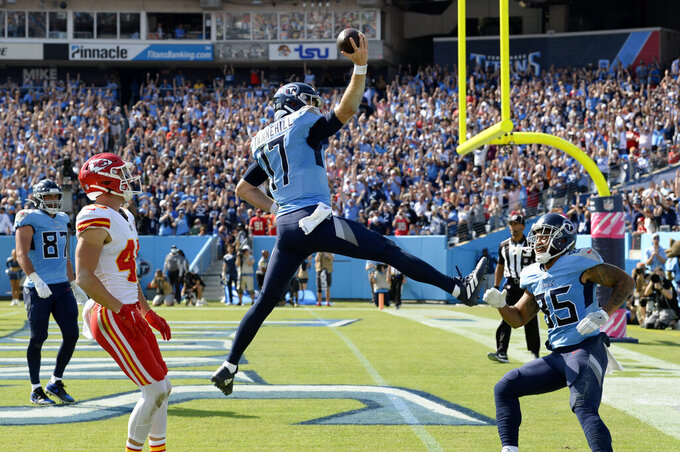 Tennessee Titans quarterback Ryan Tannehill (17) scores a touchdown against the Kansas City Chiefs in the first half of an NFL football game Sunday, Oct. 24, 2021, in Nashville, Tenn. (AP Photo/Mark Zaleski)

They did just that against the Kansas City Chiefs.

The Titans scored on their first five possessions and led 27-0 at halftime on their way to routing the Chiefs on Sunday.

Ryan Tannehill threw for 270 yards and a touchdown, and he also ran for a score as the Titans won for the fifth time in six games.

“We wanted to get going early and score points early," Tannehill said of a team with only 20 points scored in the first quarter this season. "So we were able to do that, and hopefully we can keep it going.”

The Titans (5-2) also won their second game in six days over teams that played for the AFC championship in January.

They edged Buffalo 34-31 on Monday night and followed that by simply dominating the two-time defending AFC champs as Tennessee kept scoring.

“It was a great win for everybody,” Titans coach Mike Vrabel said. “Great job. The guys stepped up.”

“They made more plays than what we did, particularly on the first few series there,” Chiefs coach Andy Reid said. “I’ve seen our guys do it and make the plays. We’re just not doing it right now.”

The Titans forced three turnovers — two by Mahomes — that they turned into 10 points. Denico Autry had two of the Titans' four sacks.

Mahomes was slow to get up after taking a knee to his head on the fourth sack by Autry. He went to the medical tent and didn't return with Chad Henne replacing him late. He finished with 206 yards passing and 35 yards rushing.

Reid said Mahomes cleared the concussion protocols and will play Nov. 1 against the Giants. But Reid chose not to put Mahomes back in for the Chiefs' final drive. Mahomes said he felt fine.

“You get hit pretty hard, sometimes you just want to lay there,” Mahomes said. “Plus it was fourth down. ... It was a disappointing day and disappointing way it ended.”

Kansas City won the toss and deferred. The Titans didn't look back despite three-time Pro Bowl left tackle Taylor Lewan sitting out with a concussion.

After a sack by Bud Dupree ended the Chiefs' first possession, Tannehill drove the Titans 97 yards on the ensuing drive, highlighted by a 46-yard throw to Brown initially ruled an incompletion. Vrabel won his challenge, and Tannehill finished the drive with a 24-yard TD pass to Brown.

After linebacker Rashaan Evans' interception, Tannehill ran for a 2-yard TD and a 24-0 lead. Randy Bullock added his second field goal off Mahomes' fumble for the 27-0 lead.

Mahomes has been intercepted in six straight games, the longest stretch of his career. He had 11 interceptions combined over 2019 and 2020 and has nine this season. His fumble with 1:46 left in the first half was his second this season, giving him 11 turnovers for the season.

That's the most Mahomes has ever had in a single season even counting the playoffs. He had only nine in 17 games in 2019 and 10 in 18 games in 2020. The Chiefs now have 17 turnovers — one more than all of last season.

Henry's TD pass made him the second NFL player in the Super Bowl era to run for at least 10 TDs and throw a TD pass in his team's first seven games. LaDainian Tomlinson was the first in 2005.

“It was definitely cool," Henry said of his TD toss.

Henry did snap a five-game stretch of 100-yard rushing games. He finished with 86 yards on 29 carries.

Brown had his first 100-yard receiving game this season all by halftime. The 2020 Pro Bowl receiver caught six passes for 101 yards and a TD and finished with eight catches for 133 yards. He shared on social media Thursday that he was still struggling with the effects of food poisoning last weekend.

Titans left guard Roger Saffold hurt a thigh muscle in the first half but returned. Kendall Lamm, who started in Lewan's place, hurt an ankle in the first half and didn't return. He was replaced by Bobby Hart, signed Wednesday off Buffalo's practice squad.