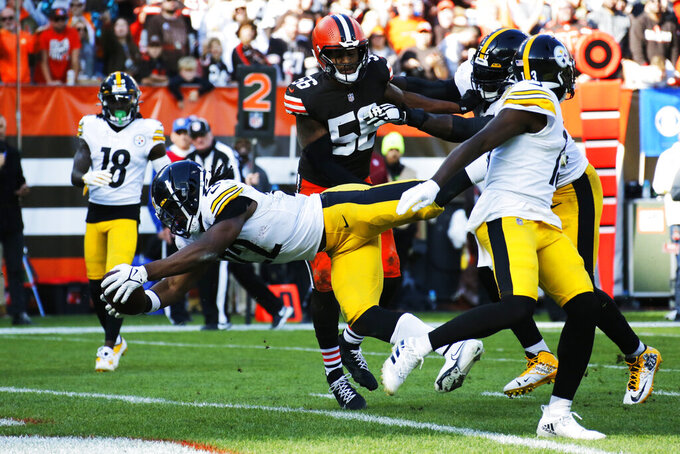 Pittsburgh Steelers running back Najee Harris (22) dives into the end zone for an 8-yard touchdown during the second half of an NFL football game against the Cleveland Browns, Sunday, Oct. 31, 2021, in Cleveland. (AP Photo/Ron Schwane)

PITTSBURGH (AP) — Mike Tomlin approached the throng of Pittsburgh Steelers supporters standing outside the tunnel to the visiting locker room on Sunday, sunglasses unable to hide his gleeful intensity.

“What's up? What's up!" the longtime Steelers coach said over and over again while handing out emphatic hand slaps to players and assistants after a 15-10 victory over Cleveland that pushed his team's record to 4-3.

The win also moved Tomlin's career regular-season victory total to 149, the same number his predecessor — recently minted Hall of Famer Bill Cowher — racked up over the same number of seasons (15) in Pittsburgh.

Their resumes are strikingly similar. Both Cowher and Tomlin have been to two Super Bowls. Both have won one. Cowher's teams reached the playoffs 10 times. Tomlin is at nine and counting, with Pittsburgh — despite an offense that remains very much a work in progress — in the mix for a 10th at the season's midway point. Tomlin's next losing season with the Steelers will be his first.

This is why the speculation bafflingly trafficked as “news” during the team's bye week that Tomlin's name was on the radar for open jobs at places such LSU and USC was “a joke” to him. It's why his “never say never, but never” response when asked about the possibility of leaving a franchise that changes coaches once a generation — if that — went viral.

Tomlin signed a contract extension in April that runs through 2024, a tacit agreement from the front office that the 49-year-old has earned the right to see what he can do after quarterback Ben Roethlisberger retires — whenever that may be. Tomlin wasn't kidding when he said he has one of the best jobs in professional sport. One of the most stable too.

While outside sentiment on his coaching acumen can swing from week to week and season to season — a quick scan of social media on Sunday nights and Monday mornings in the fall consistently reveals that there's a segment that still thinks he's not up to the gig regardless of the result — make no mistake: Tomlin remains very much in control of his locker room and his team.

Having a quarterback destined for the Hall of Fame helps. So does having a dose of humility. Tomlin's decision to call for a fake field goal late in the first half of a tie game on Sunday turned disastrous.

The Browns weren't fooled when kicker Chris Boswell started running to his right with the ball in his hands. Boswell's fluttering pass to nowhere fell incomplete and Boswell was lost for the afternoon after getting drilled by Cleveland's Jordan Elliott, a hit that landed Boswell in the concussion protocol.

“I shouldn’t have called it unless we were ready to run it with detailed execution and it’s obvious that we weren’t,” Tomlin said. “That’s on me.”

Ultimately, it didn't matter. The defense kept Cleveland's running game in check. Rookies Najee Harris and Pat Freiermuth scored highlight-reel touchdowns. Roethlisberger made plays when he had to.

And a season that looked on the version of being lost at 1-3 has the Steelers and their equal parts fiery and stoic coach in the mix heading into November, just as always.

Maybe it'll work out this season. Maybe it won't. Tomlin isn't getting ahead of himself, a painful lesson he's learned through the years. Yet he remains as hyper-focused on the task in Pittsburgh now as he was the day in January 2007 when he replaced Cowher as a relatively unknown 34-year-old.

“It is days like (Sunday) that give you an indication of what you could be,” he said. “We’ll continue to write that story positively or negatively, but today was a good day.”

The Steelers raised eyebrows when they used a second-round pick on Freiermuth in April, considered a reach at the time because of the needs along the offensive line. The selection looks like a steal with each passing week, look at Freiermuth's juggling touchdown grab in the back of the end zone in the fourth quarter as proof.

Zach Gentry. With Eric Ebron sidelined by a hamstring injury, the third-year tight end caught three passes for 39 yards to match his season total coming in.

Devin Bush might be fully recovered from a torn ACL in his left knee, but his instincts still appear to be rusty. The linebacker overran his gap on a stretch play by the Browns, allowing Cleveland's D'Ernest Johnson to cut back for a walk-in touchdown.

Boswell is one of the league's most accurate kickers. Finding a capable replacement to kick at notoriously difficult Heinz Field will be difficult if he doesn't exit the concussion protocol this week.

1 — the number of coaches (Bill Belichick) with more victories than Tomlin since he took over in Pittsburgh.

Try to carry the momentum into a two-game homestand against Chicago and Detroit. Considering the minefield that awaits over the season's final two months, going 2-0 is a must if the Steelers want to have any shot at the playoffs.