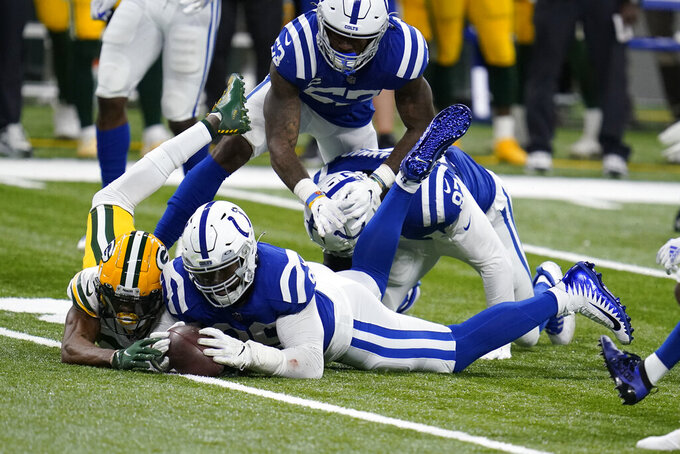 The Green Bay Packers have succeeded this season by protecting leads, taking care of the football and controlling the clock.

They failed to do any of those things Sunday.

Green Bay committed four turnovers and squandered a two-touchdown halftime advantage in a 34-31 overtime loss to the Indianapolis Colts. The defeat caused the Packers (7-3) to fall behind New Orleans (8-2) in the race for the NFC’s best record.

“I thought the first half was pretty good, complementary football,” coach Matt LaFleur said. “In the second half, they went on long drives. We go three-and-out. We fumble on a kickoff. That stuff is just not going to cut it in this league.”

This marked the first time in LaFleur’s two-year coaching tenure that the Packers lost a game they led at halftime, though they were tied 14-14 midway through a 28-22 loss to the Minnesota Vikings on Nov. 1. Green Bay’s collapse was surprising not only because of how the game started but because of how the Packers performed in practice all week.

“I felt like this was the first week all season where we practiced like a great team and not just a good team, so that was encouraging,” quarterback Aaron Rodgers said. “I figured the performance would be really solid based on that. That’s how it goes sometimes. The mistakes can happen, regardless of how you practice.”

This latest loss showcased one weakness that has been apparent for much of the season. The defense that allowed Minnesota’s Dalvin Cook to score four touchdowns on Nov. 1 couldn’t slow down Colts rookie running back Jonathan Taylor in the second half.

But the Packers also made uncharacteristic mistakes.

Green Bay committed just three turnovers in its first 8 ½ games, but has six turnovers in the 1 ½ games since.

Indianapolis’ Rodrigo Blankenship kicked the winning 39-yard field goal with 7:10 left in overtime after Marquez Valdes-Scantling, whose 47-yard catch set up a tying field goal in the losing seconds of regulation, lost a fumble that DeForest Buckner recovered at the Packers 29-yard line. Valdes-Scantling found himself the subject of enough criticism after the game that he tweeted, “Death threats over a football game?” and noted that his teammates have “got my back.”

Valdes-Scantling's fumble was only one of numerous Packers errors.

The Colts (7-3) took a 31-28 lead in the fourth quarter after Darrius Shepherd fumbled a kickoff return to set up another Blankenship field goal. A fumbled exchange between center Corey Linsley and Rodgers thwarted a Packers scoring opportunity on the game’s opening series.

“I think it is an anomaly based on the (other) nine games we’ve played,” said Rodgers, who went 27 of 38 for 311 yards with three touchdowns and an interception. “We haven’t had more than two (turnovers), I don’t think, in any other game. A lot of zeroes.”

The Packers entered the day leading the NFL in time of possession (33:08), but they allowed Indianapolis to control the ball for over 35 minutes Sunday. Green Bay’s offense had just six snaps in the third quarter.

That followed a first half in which Green Bay took a 28-14 lead by picking apart a Colts defense that had been allowing the fewest yards per game of any NFL team.

The Packers wouldn’t score again until the closing seconds of regulation as the Colts scored 17 straight points. Green Bay’s chances appeared slim after the Packers passed up a potential tying field-goal attempt and Rodgers threw an incompletion to Jamaal Williams on fourth-and-1 from the Colts 34 with 3:06 left.

“It was kind of the mindset to be aggressive,” LaFleur said. “We could have attempted a really long field goal but just had confidence in the play. Unfortunately, you’ve got to give Indy a lot of credit in that situation. We had Davante out there and they doubled him, and the play was designed to go to him. In hindsight it was not a good call. Aaron tried to hold on as long as he could and hit the checkdown with Jamaal, but unfortunately it didn’t work out.”

The Packers appeared in even greater jeopardy when the Colts threw two straight completions to get a first down after facing third-and-19, but a plethora of Indianapolis holding penalties on their final possession gave Green Bay one last shot at its 6 with 1:25 left. The long completion to Valdes-Scantling on third-and-10 led to Mason Crosby’s tying 26-yard field goal with 3 seconds left in regulation.

Then came one final mistake on a day full of them.

Valdes-Scantling’s fumble set up the field goal that sealed the outcome and prevented the Packers from extending their NFC North lead over the Chicago Bears (5-5) to three games. The Packers must try to shake off this loss before the Bears visit Lambeau Field next week.