Vikings look good on offense in 34-25 win over Saints 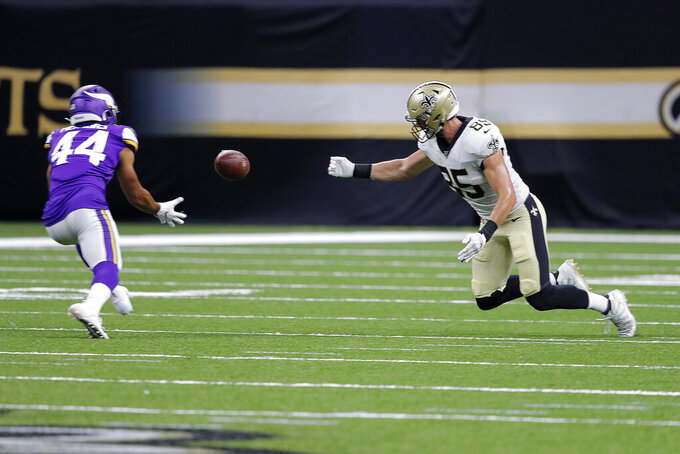 Minnesota Vikings defensive back Nathan Meadors (44) pulls in an interception for a touchdown on a bobbled pass by New Orleans Saints tight end Dan Arnold (85) in the second half of an NFL preseason football game in New Orleans, Friday, Aug. 9, 2019. (AP Photo/Bill Feig)

NEW ORLEANS (AP) — Kirk Cousins was flawless in his lone series in Minnesota's new offensive scheme, backup Sean Mannion delivered a scoring pass under a heavy rush, and the Vikings defeated New Orleans 34-25 in the preseason opener for both clubs on Friday night.

The game marked the Vikings' first test of their new offense directed by coordinator Kevin Stefanski and influenced by adviser Gary Kubiak. It looked effective for the lone series in which the first-team offense played.

Cousins drove the Vikings 81 yards in eight plays, completing all four passes for 65 yards. Cousins connected on a pair of short passes before finding Adam Thielen for 35 yards down the right side, setting up a 1-yard scoring pass to third-round draft choice Alexander Mattison.

Jameis Winston led the Bucs' first-team offense to a touchdown in his only offensive series against a Steelers defense that featured few regulars.