Water worries in West force sports teams to get creative 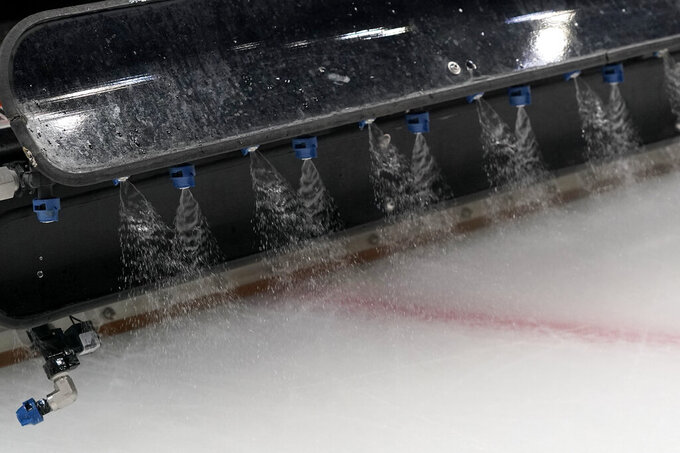 Water sprays from a Zamboni as it resurfaces the ice after an NHL hockey game between the Los Angeles Kings and the Calgary Flames, Dec. 2, 2021, in Los Angeles. On game days, the Kings use 800 to 1,200 gallons to maintain the ice. (AP Photo/Mark J. Terrill)

DENVER (AP) — The Arizona Diamondbacks ripped out the grass at Chase Field ahead of the 2019 season, replacing it with synthetic grass. It was a business decision, but it also ended up being a water-conservation measure.

The Phoenix-based major league baseball team thought it would save 2 million gallons a year. In the first season, the savings were closer to 4.5 million gallons, which is roughly the annual water usage of 49 households in the Phoenix area, according to the Arizona Department of Water Resources.

“This challenge has been approaching for years and has been on our radar,” said Diamondbacks President and CEO Derrick Hall, whose team has saved 16 million gallons of water since the turf was installed. “We have tremendous relationships with the state’s legislators and executives, and have had discussions about water for years.”

That’s not to say the Diamondbacks don’t use water, none of which is recycled or reclaimed. There are hundreds of low-flow toilets, urinals and sinks, plus the outfield pool and the need to hose down seats or wash uniforms.

With scientists predicting that climate change will lead to droughts and possible water shortages throughout the West in the coming years, The Associated Press asked pro teams in the Colorado River Basin who have grass or ice playing surfaces about use and sustainability strategies. Of the four interviewed, three rely mostly on reclaimed, recycled or created water and two have high-tech irrigation sensors. Not one has a detailed plan for current or future drought situations.

Regardless of their strategies, pro teams’ usage is “probably negligible or immaterial, in terms of the impact” on water sustainability, said Sarah Porter, director of the Kyl Center for Water Policy at Arizona State University. She’s more concerned about sports' “moral leadership.”

When “players help take the lead and emphasize the importance of sustainability, that can have an impact,” she said, “because that helps move everybody into the kind of new math that we have to move into as we deal with declining Colorado River supplies and changes in the amount of snowpack we get from our other big water sources.”

The authors of the 1922 Colorado River Compact couldn’t have imagined what the West would look like a century later, when about 40 million people and millions of agricultural acres rely on the 1,450-mile-long waterway. That high demand is running up against a rapidly warming climate, one scientists believe will cause a more unpredictable amount of water that could lead to droughts and lower reservoir levels.

Arizona, Nevada and Mexico must cut back on usage in 2022 because of low water levels at Lake Mead, though the restrictions mostly affect agricultural areas; Las Vegas and Phoenix are spared for now. California had a statewide drought declaration this year, and the State Water Resources Control Board is considering new water-use rules for homeowners.

But water is barely mentioned in September's inaugural Sustainable Sport Index benchmarking report from Honeycomb Strategies, which works with venues and stadiums on sustainability. Eight of the 20 pro teams that responded were in the Colorado River Basin, though none spoke with the AP. Seventy-eight percent of respondents said they track water consumption annually and 64% have timed irrigation systems.

The LA Galaxy's home — the 125-acre Dignity Health Sports Park, which opened in 2003 — recently upgraded its irrigation system to better target thirsty spots. The campus uses 90% reclaimed water “to be as responsible as possible from the onset of this building," General Manager Katie Pandolfo said.

Up the coastline, Levi’s Stadium, which is home to the San Francisco 49ers, uses mostly recycled water from the city and county of Santa Clara. While not in the Colorado River Basin, the area has its own problems, considering a new study projects the possibility of little or no snow in the Sierra Nevada mountain range in a few decades.

“You never want to compromise the integrity of the field,” Mercurio said.

Reclaimed, recycled, whatever you call it, Porter with the Kyl Center said it’s a net positive, but “doesn’t actually contribute to sustainability in the big picture.”

“We have to stop thinking of it as being virtuous for people to use reclaimed water, because that water could be treated up to potable standards and used for anything,” she said.

The Los Angeles Kings have an unusual source for water at the Crypto.com Arena and the Toyota Sports Performance Center practice facility. Both have an Energetico Climate Processor, which pulls humidity out of the air and turns it into water; the Kings said, combined, that saves a total of 620,500 gallons of city water a year.

It takes about 10,000 gallons to make ice at the beginning of the NHL season. On game days, the Kings use 800 to 1,200 gallons to keep the surface playable, said Kelly Cheeseman, the chief operating officer of the L.A. Kings and AEG Sports.

The first year of the climate processor system at the Crypto.com Arena, in 2018, the Kings used the majority of created water for the initial ice and maintenance. But now the 500 to 700 gallons per day goes toward the cooling towers that are part of the heating and air conditioning system (though the towers still need another 4,300 gallons a day of city water).

If teams’ overall water usage is a relative drop in the bucket, then the long-term impact relies on star power, Porter said. In other words, teams can’t just practice, they must preach.

The 49ers recently announced a new partnership with Save Our Water and the state's Department of Water Resources, which will involve signage at the stadium, a webpage and a PSA campaign that started this month with wide receiver Deebo Samuel.

Pandolfo said the Galaxy has “a brand that people love and, quite frankly, listen to, so we have an obligation to make sure that we are putting the message out there ... that this is something important."

Hall with the Diamondbacks said the team understands "our social responsibility when it comes to talking the talk, but more importantly, walking the walk.” But Porter said teams need to go beyond the usual fix-your-leaky-faucets talk, and instead raise the idea of permanently reducing outdoor water use — like encouraging residents to get rid of a pool — or share expertise on xeriscaping.

“If one of Arizona’s beloved sports teams started to lead a conversation about water use among affinity organizations,” she said. “I think it would really … create momentum.”

For all of AP’s environmental coverage, visit https://apnews.com/hub/environment