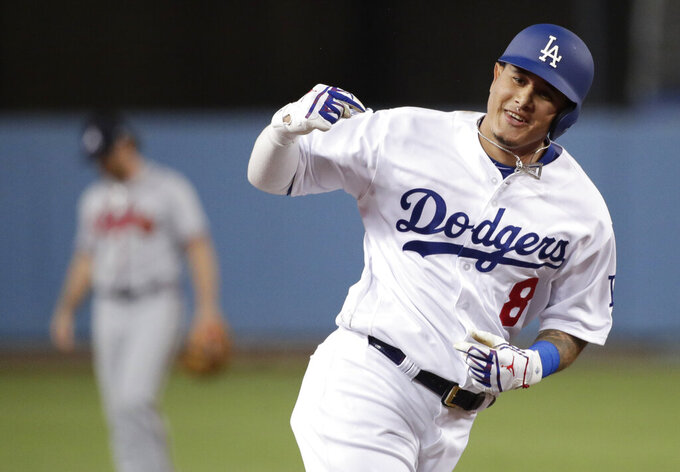 FILE - In this Oct. 5, 2018, file photo, then-Los Angeles Dodgers' Manny Machado celebrates his two-run home run against the Atlanta Braves during the first inning of Game 2 of a baseball National League Division Series, in Los Angeles. A person familiar with the negotiations tells The Associated Press that infielder Manny Machado has agreed to a $300 million, 10-year deal with the rebuilding San Diego Padres, the biggest contract ever for a free agent. The person spoke to the AP on condition of anonymity Tuesday, Feb. 19, 2019, because the agreement was subject to a successful physical and had not been announced. (AP Photo/Jae C. Hong, File)

SAN DIEGO (AP) — With their city's long-suffering fans desperate for a winner, the rebuilding San Diego Padres delivered their splashiest free agent signing ever by agreeing with All-Star infielder Manny Machado on a $300 million, 10-year deal.

A person familiar with the negotiations confirmed the deal to The Associated Press on Tuesday, speaking on condition of anonymity because the agreement was subject to a successful physical and had not been announced. Machado can opt out after five years and become a free agent again, the person said.

Machado's agreement would be the second-largest in baseball history behind Giancarlo Stanton's $325 million, 13-year deal signed with the Miami Marlins ahead of the 2015 season. It would be the highest deal for a free agent, topping Alex Rodriguez's $275 million, 10-year contract with the New York Yankees from 2008-17.

That won't matter a bit to Padres fans, who have never celebrated a World Series title and were keeping their fingers crossed in recent days as it became apparent that their team, with a mostly sad-sack history stretching back a half-century, actually had a chance at landing Machado, who is only 26.

Some fans seemed braced for yet another disappointment. But news of the deal was greeted with euphoria on social media.

Speaking at spring training in Peoria, Arizona, Padres executive chairman Ron Fowler declined to confirm the deal, saying: "We do not have a deal with any free agent player. We are continuing discussions, and that's all we have to say."

Teams draw a distinction between an agreement subject to a physical and a finalized deal.

While Fowler looked serious, general partner Peter Seidler couldn't help but smile while waiting for his turn to speak.

Without confirming the deal, Seidler — a nephew of former Los Angeles Dodgers owner Peter O'Malley — spoke of what his ownership group wants to bring to San Diego, where the Padres play in a gem of a ballpark just off the bay.

"Ron and I, we love the city of San Diego, we love sports in San Diego, but we're also well aware of the history. There's never been a championship from a major sports franchise in San Diego. ... We as an organization want to completely change that. We want our franchise to win year after year after year. And we're going to do whatever we can rationally do to help make that happen."

The Padres lost 96 games last year, haven't had a winning season since 2010 and haven't been to the playoffs since 2006. They haven't won a playoff series since the 1998 NL Championship against Atlanta. They were routed in their two World Series appearances, by Detroit in 1984 and the New York Yankees in 1998.

And they've had the city's big league sports scene to themselves since the NFL's Chargers moved to the Los Angeles area two seasons ago. The Chargers did win the AFL title in 1963 but were blown out by San Francisco in their only Super Bowl appearance, after the 1994 season.

Other than the AFL title, the biggest championships won around here were probably Little League World Series titles in 2009 by Park View of Chula Vista and in 1961 by El Cajon-La Mesa Northern, which included Brian Sipe, who won the NFL's MVP Award in 1980.

Padres players were ecstatic, even though the signing was not yet official.

Catcher Austin Hedges was headed toward bunting drills when he heard the news. He pumped his fists and said, "I'm just that excited about bunting."

"You see me smiling right here," said first baseman Eric Hosmer, who exactly a year ago earlier finalized a $144 million, eight-year deal with San Diego. "We've all been practicing today, obviously. We've all kind heard what's been going on, and all we can say is he's a guy we'd love to have, and I think it changes things pretty quickly if we do have him here.

The Padres have been rebuilding mostly via their top-rated farm system since a failed win-now approach with high-priced veterans in 2015.

Machado is expected to fill the team's glaring need at third base. He began last year at shortstop with Baltimore, was traded to the Los Angeles Dodgers after the All-Star break and split time and shortstop and third. He struck out to end the World Series loss to Boston.

Commissioner Rob Manfred said the deal, if it goes through, is "a great thing. The Padres were active last year in the free-agent market, obviously a big signing with Eric Hosmer. This would be another one, if in fact that's what happened. And I think it's good for baseball to have big stars present in some of our smaller markets and see those markets really being out there willing to compete for the best talent."

With Machado on board, the next big move for the Padres, whether by opening day or later in the season, is expected to be the promotion of shortstop Fernando Tatis Jr., the 20-year-old son of a former big leaguer and the No. 2 overall prospect in baseball.

The Chicago White Sox offered $250 million for eight years, a person familiar with that proposal said. That person spoke to the AP on condition of anonymity because the club did not publicly disclose its offer. The White Sox were trying to get in position for a second title under owner Jerry Reinsdorf, who turns 83 next week.

"Still in a bit of disbelief," executive vice president Kenny Williams said. "I feel we put our best foot forward. Jerry, in particular, really stepped up."

Machado also met with the Yankees, a team that had expressed concern over Machado's remarks about hustling — not hustling, actually — during the playoffs.

After failing to run out a grounder in the NL Championship Series, Machado said: "Obviously I'm not going to change, I'm not the type of player that's going to be 'Johnny Hustle' and run down the line and slide to first base."

Machado tried to clarify his remarks after the season, saying, "looking back, it doesn't come across how I meant it."

No worries. Padres fans will take him.