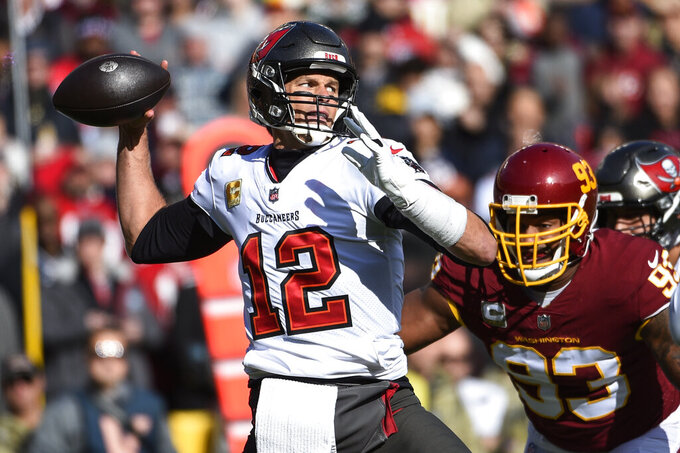 TURNOVER DIFFERENTIAL: Giants plus-3; Buccaneers plus-3

GIANTS PLAYER TO WATCH: Kenny Golladay. The wide receiver returned to action against the Raiders after missing three games with a knee injury. He was targeted twice on his 31 plays and had two catches for 28 yards. With a bye week off, he should be ready to do more against a pass defense ranked 22nd. For the season, the play-making receiver has 19 catches for 310 yards, a 16.3 yard average, and no touchdowns. He was signed as a free agent in the offseason to a four-year, $72 million contract.

BUCCANEERS PLAYER TO WATCH: Tom Brady. The 44-year-old, seven-time Super Bowl champion leads the NFL with 27 touchdown passes and is third with 2,870 yards. He’s thrown a pair of interceptions in each of the past two games, road losses at New Orleans and Washington. He’s been excellent at home this season, throwing for 1,277 yards and 18 TDs vs. two interceptions in four games at Raymond James Stadium.

KEY MATCHUP: Giants QB Daniel Jones against a defense that allowed Washington to compile nearly a 2 to 1 advantage in time of possession en route to last week’s upset of the defending Super Bowl champions. Tampa Bay’s secondary is still reeling from a rash of injuries that’s sidelined starting CBs Sean Murphy-Bunting and Carlton Davis for most of the season. CB Richard Sherman was placed on injured reserve this week. Another backup pressed into action because of injuries, CB Dee Delaney, left last week’s game with a concussion.

KEY INJURIES: Giants RB Saquon Barkley (ankle) returned to practice this week. If he plays Monday night, he will not have taken a handoff in six weeks. Giants LT Andrew Thomas has missed the past three games with foot/ankle injuries. ... Murphy-Bunting (dislocated elbow) has been sidelined since being injured in the season opener. He has been practicing for two weeks and could return to the lineup as soon as Monday night. ... Buccaneers TE Rob Gronkowski (ribs) and WR Antonio Brown (ankle) are progressing toward possible returns after being sidelined much of the past month.

SERIES NOTES: The teams are meeting for the third straight season. The Giants also visited Raymond James Stadium in 2019, coming from behind to win 32-31 in Brown’s first career start. ... New York’s 16-8 edge includes a 24-14 road victory in the only playoff game between the franchises. The win began the Super Bowl run finishing the 2007 season. ... The Buccaneers won last year’s prime-time matchup at MetLife Stadium 25-23.

STATS AND STUFF: New York has lost nine straight games in prime time, including contests at Washington and Kansas City this season. ....The Giants are 13-19 in games after the bye week, which was re-introduced in 1990. New York beat Cincinnati last season in coach Joe Judge’s first post-bye game. ... Jones made his first NFL start against Tampa Bay in Week 3 of his rookie season in 2019. He threw two touchdowns and ran for two more in rallying the Giants to a win. ... Barkley, who missed the last four games with an ankle injury, missed last year’s Monday night game against Tampa Bay because of an ACL injury. He sprained his ankle against the Bucs in Florida in 2019 and missed the next three games. .... RB Devontae Booker has started with Barkley out and he is going for his third straight game with at least 120 yards from scrimmage. ... TE Evan Engram has caught touchdowns in two straight after catching none all season. He had six catches for 113 yards and a TD against the Bucs in 2019. ... S Xavier McKinney returned one of his two interceptions for a touchdown against the Raiders in the win before the bye. He leads the team with four picks. ... DB Logan Ryan has had at least seven tackles in each of his last five road games. ... DL Leonard Williams has had sacks in his last two games against Tampa Bay. He and rookie LB Azeez Ojulari lead New York with 5½ sacks apiece. ... PK Graham Gano’s 19 field goals are tied for second in the league. ... Brady is three TD passes shy of joining Brett Favre and Peyton Manning for the second-most seasons (nine) with 30-plus TD passes. ... Tampa Bay’s Mike Evans is closing in on becoming the sixth WR with at least 9,000 yards and 70 TDs receiving in the first eight seasons of a career. He need 128 yards and already has the 70 touchdowns. ... Bucs LB Devon White had 18 tackles and two sacks in last week’s loss at Washington. ... Bucs LB Jason Pierre-Paul had 58½ sacks in 111 games with the Giants from 2010 to 2017. Since being traded to Tampa Bay, he has 2½ sacks and three QB hits against his former team.

FANTASY TIPS: Evans has averaged 18.2 yards per catch, 116.4 yards per game and scored six TDs in five career games against the Giants.