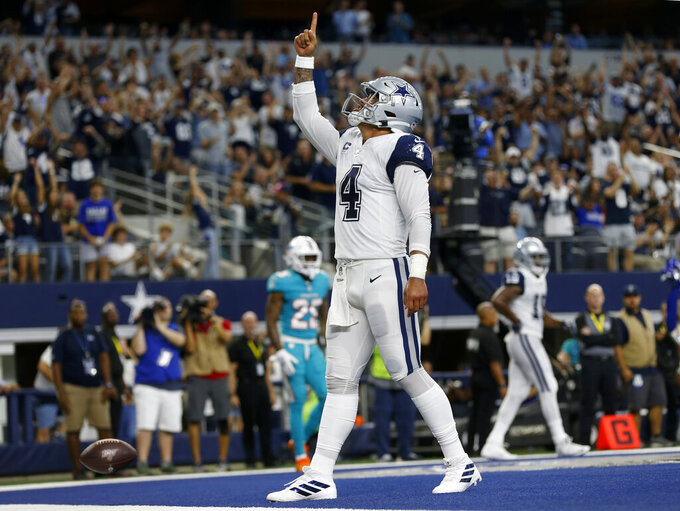 Dallas Cowboys quarterback Dak Prescott (4) celebrates his touchdown run against the Miami Dolphins in the second half of an NFL football game in Arlington, Texas, Sunday, Sept. 22, 2019. (AP Photo/Ron Jenkins) 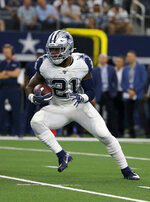 NEW ORLEANS (AP) — Saints cornerback Eli Apple suggests that the high-powered Cowboys could bring out the best in a New Orleans defense that has been off to a shaky start.

Currently, just two NFL teams — the New York Giants and Pittsburgh — have allowed more yards passing per game than the 301.7 yielded by New Orleans. And it would appear the Saints (2-1) have yet to face an offense as potent as that of the Cowboys (3-0), who have yet to score fewer than 31 points in a game.

Dynamic Dallas quarterback Dak Prescott, who has passed for 920 yards and nine touchdowns already this season, enters Sunday night's game in the Superdome with some added personal incentive to produce a memorable performance.He grew up in the Shreveport area — the one part of Louisiana nearly split between Cowboys and Saints fans — and will be making his first NFL start in his home state.

His biggest previous game in Louisiana was in 2014 at LSU , when his dynamism put a dent in the Death Valley mystique and ended the Bulldogs' 14-game losing streak against the Tigers. That was also Mississippi State's first victory in Tiger Stadium since 1991 — two years before Prescott was born.

Now Prescott will try to help the Cowboys win in the Superdome for the first time since 2009, when they ended the Super Bowl-bound Saints' 13-game winning streak.

"It's always fun, knowing this environment, knowing the Superdome, knowing how their fans are going to be, the intensity, the atmosphere," Prescott said. "I'm excited to go in there with my team, the brotherhood we have, an us-against-the-world mentality."

Stopping Dallas can be hard enough when Prescott is extending plays with his scrambling ability, finding receivers such as Amari Cooper and piling up about 302 yards passing per game, which ranks fourth league-wide. Never mind the fact that Dallas' running back tandem of Ezekiel Elliott and rookie Tony Pollard , who both gained 100-plus yards against Miami last week, leads a ground game that ranks third in the NFL with 179 yards per game.

When playing against an offense like that, Apple said he takes only one approach.

"Go and get it. That's all you can do. Make plays, fly around, enthusiasm and have fun with it," Apple said. "We've got to deliver the punches."

Here are some of the prime story lines surrounding the Cowboys' first visit to New Orleans since 2015:

The Saints are entering their second full game with QB Teddy Bridgewater taking first-team snaps in place of the injured Drew Brees and expect to see progress from a unit that gained 265 yards and accounted for three of the Saints' five touchdowns in a 33-27 victory at Seattle last week. Since coach Sean Payton and Brees arrived in New Orleans in 2006, the Saints usually have been a top-five offense. But with Bridgewater under center for seven of 12 quarters, New Orleans ranks an uncharacteristic 21st in yards per game (339.7).

"The thing with this coaching staff is that they're great for a reason," Bridgewater said. "They're able to call plays to where whoever's in there can do well. They play to our strengths. This past week we were able to do some things that I was comfortable doing and we had some success."

Bridgewater said coaches dialed back some of the usual complexities of the game plan last week because crowd noise in Seattle has been known to cause communication problems for opposing offenses.

"Being back home, being able to do our own cadence, we can do more," Bridgewater said. "Everyone gets enamored with numbers and seeing the ball pushed down the field. When those opportunities come, we want to take advantage of them. I just want to help this team win football games."

PICKING UP THE PACE

Despite missing the entire preseason in a holdout and getting eased back in the first three games, Elliott has more yards through three games than in any of his first three seasons. The two-time rushing champion is up to fourth in the NFL with 289 yards, 86 fewer than leader Dalvin Cook of Minnesota. Elliott had 274 through three games in each of the seasons he went on to win the rushing title, as a rookie in 2016 and last year.

"I don't think there's really much meaning into just me having like maybe 10 more yards than I had the year before," said Elliott, who is coming off consecutive 100-yard games. "We're happy where we're at as an offense. We're running the ball really well."

With defensive tackle Sheldon Rankins recovering from an Achilles tendon tear last January, the Saints have been experimenting with three defensive ends in their four-man front. That package has paid dividends for third-year end Trey Hendrickson. He didn't have a single sack last season and often was a healthy scratch. So far this season he's leading the Saints with a career-high three sacks, followed by Cameron Jordan with two and 2018 first-round draft choice Marcus Davenport. The Saints sacked Prescott seven times, one of few flattering statistics for New Orleans in a 13-10 loss at Dallas last November.

Defensive end Robert Quinn had a sack and a career-high seven QB pressures in his Dallas debut against Miami, his former team, coming off a two-game suspension for violating the NFL's policy on performance enhancers. It was also the first time Quinn was paired with DeMarcus Lawrence, who had his first sack since signing a $105 million, five-year contract in the offseason.

"He brings more speed," Lawrence said of his new teammate. "That's the only thing that can evaporate daylight is speed. Being able to have more speed on the opposing side is great for me. Now I can make any move I want."

Quinn played 63 percent of the snaps (44 of 70) in the 31-6 victory against the Dolphins , who had Quinn for one season after he spent his first seven years with the Rams. The playing time was more than coaches expected after the 29-year-old broke his left hand in practice early in training camp and missed all the preseason games.

"First time I'm hearing that," Quinn said of the QB pressures. "I guess that's a good way to come back and make my first statement as a Cowboy."