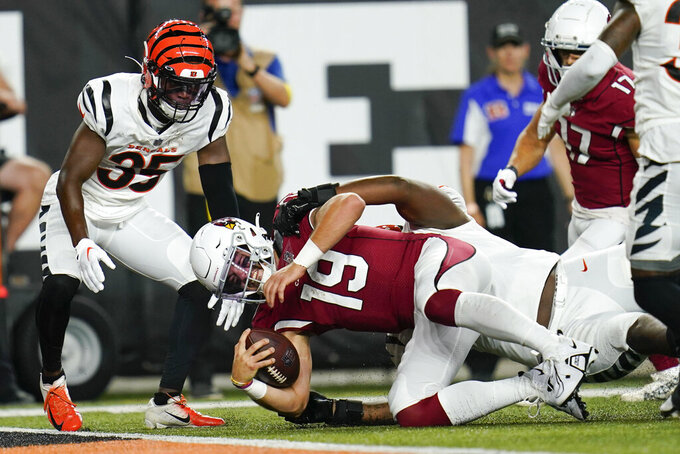 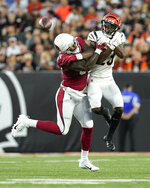 The most encouraging sight for the Cincinnati Bengals in their preseason opener might have been quarterback Joe Burrow running warmup sprints with his teammates before the game.

The Bengals star, who had an appendectomy on July 27, is expected to be ready for the regular-season opener Sept. 11. He watched from the sideline with the rest of the starters from both teams in a predictably sloppy preseason opener won by the Arizona Cardinals 36-23.

Jonathan Ward, trying to win a spot in a crowded Arizona backfield, ran for a pair of 1-yard touchdowns in the second quarter.

Trace McSorley and Jarrett Guarantano, in competition to be the third-string quarterback, shared the snaps for the Cardinals. McSorley, who was signed midway through the 2021 season, threw for 163 yards and a touchdown to Andre Baccellia.

Guarantano, an undrafted free agent, was 7 for 10 for 54 yards and tossed a short touchdown pass to Jontre Kirklin.

“Any time you can play a clean game with substitutions, penalties, no turnovers, I thought that was what we wanted out of it," Arizona coach Kliff Kingsbury said. "Long way to go. A lot of stuff we’ve got to get better at.”

The highlight for the Bengals was a late 11-play, 94-yard drive directed by undrafted free agent quarterback Drew Plitt and punctuated by a 25-yard TD pass to Kendric Pryor.

The Bengals lost Brandon Allen, who backed up Burrow last season, early in the game with a concussion. That left third-stringer Jake Browning to direct Cincinnati the rest of the way, going 13 for 24 for 190 yards. Plitt, signed when Burrow had surgery last month, completed all six of his pass attempts for 76 yards.

It was a messy affair for the Bengals' rookies and back-ups. They were flagged for 11 penalties that cost them 104 yards. That included a 60-yard run by running back Chris Evans that was erased by a holding penalty. Cincinnati rushed for only 62 yards in the entire game.

“We all have a lot to learn from that first experience,” said Jackson Carman, a second-year offensive lineman competing to start at left guard. “There’s always stuff you have to learn.”

Keaontay Ingram also had a 1-yard touchdown run for Arizona (1-0).

Trent Taylor added four catches for 74 yards for Cincinnati. Jacques Patrick ran for a 1-yard TD in the fourth quarter.

Evan McPherson picked up where he left off in his terrific rookie season in 2021, booting field goals of 23, 58 and 56 yards for Cincinnati.

Cardinals quarterback Kyler Murray was out with a wrist injury and backup Colt McCoy has a sore arm, so McSorley and Guarantano both got ample opportunity to audition.

“It was good to get both those guys out there and getting them playing some meaningful snaps,” Kingsbury said.

Bengals: Allen went out after playing the first series. It's not clear how long he'll be out. ... TE Mitchell Wilcox left in the first quarter with an ankle injury and didn't return. ... CB Cam Taylor-Britt, a second-round draft pick in the spring, has a core muscle injury, but further details weren't provided.

Cardinals: Baccellia suffered an ankle injury in the first half and didn't return.

Bengals S Jessie Bates III is still missing from training camp. Bates was frustrated with efforts to sign a long-term contract, and the team put the franchise tag on him for the season. If anyone has an indication when or if he'll report, they aren't saying.

“Whenever he gets here, he’ll be ready to go," coach Zac Taylor said Friday.