Chiefs' Pat Mahomes living up to his 'Showtime' nickname 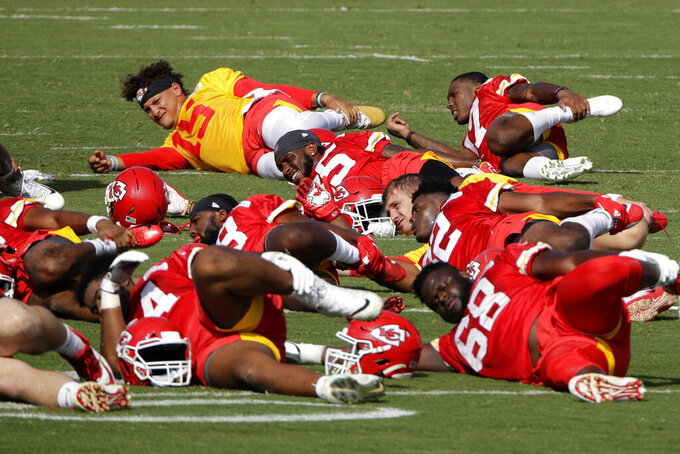 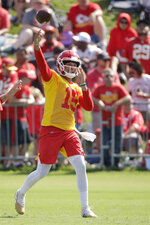 ST. JOSEPH, Mo. (AP) — Patrick Mahomes spent this past offseason riding horses through the surf and throwing passes on the beach, swapping jokes with Jimmy Kimmel and hob-knobbing with celebrities on the red carpet.

He's the cover boy for this year's Madden video game. The Texas Tech die-hard who followed his alma mater all the way to the Final Four. The sports fan that suddenly pops up at the Stanley Cup Final, then makes sure to congratulate the St. Louis Blues on his uber-popular social media channels.

Mahomes also is the face of the Kansas City Chiefs, the reigning NFL MVP and without question the biggest star to land in the City of Fountains since George Brett was playing third base for the Royals.

One that was largely undiscovered just a year ago.

Mahomes was anointed the starter last offseason, when the Chiefs shipped Alex Smith to the Redskins, but his arrival at training camp came with plenty of question marks: Could his big arm buck the trend of Red Raider quarterbacks flaming out in the NFL? Could he run coach Andy Reid's complex offense? Could he live up to the expectations that come with being a first-round draft pick?

He answered all those questions in the season opener against the Chargers. In the awkward setting of a soccer stadium in Los Angeles, the mop-haired Mahomes threw four touchdown passes without a pick.

He threw six touchdown passes the next week in Pittsburgh. Three more against San Francisco. And he led the Chiefs to a 5-0 start before a road loss to New England, only to rebound with four more wins.

Mahomes wound up shattering the franchise records for completions (383), yards passing (5,047) and touchdown passes (50), along with more obscure metrics such as quarterback rating.

He finally led the Chiefs to a home playoff win, their first in nearly two decades, and nearly beat the Patriots in the AFC title game. The teams headed to overtime tied 31-all, the Patriots won the coin toss and marched downfield for the winning touchdown, denying Mahomes a chance with the ball.

It was a nightmare ending to an otherwise dream season.

"Every win and every loss you use going into the next season," Mahomes said. "Obviously, we were super close to making the Super Bowl and we fell just short of that, but we're going to keep progressing forward and keep learning from that game, learn from what we didn't do as well."

Mahomes spent the offseason working on his footwork, which has always caused him trouble. He often gathered his wide receivers for impromptu passing sessions under the hot Midwestern sun. And he even made time to throw some passes to them when they took a quick trip to Turks and Caicos.

Yes, he somehow found time for plenty of football amid his many other demands.

Mahomes watched the Red Raiders in basketball's national semifinals in April, then landed on the Madden cover later that month. He signed a series of sponsorship and endorsement deals, walked the red carpet at the ESPY Awards, and left Kimmel laughing on his show just a few weeks ago.

That nickname of "Showtime?" Sounds about perfect.

His magnetic personality and otherworldly talent also has had a big impact on the Chiefs. Record crowds showed up for the first two days of training camp last weekend, where his No. 15 jersey outnumbered all others by about 2-to-1, and ticket sales for the upcoming season are skyrocketing.

"You look at the impact he's had on our business, it's multilayered," Chiefs president Mark Donovan said. "He has benefited us in terms of a lot of our big partners are partners with Patrick. It is a great activation point, and that's creating opportunities for other players."

Mahomes is wise enough to understand it could all be gone in a flash, though. He saw firsthand how quickly stars can fade in professional sports from hanging around big league clubhouses with his father, pitcher Pat Mahomes, and his godfather, longtime relief pitcher LaTroy Hawkins.

That's why he learned to say "no" this offseason, trying to strike a balance between work, business and pleasure. He showed up to training camp in better shape, the baby fat that he brought into the league replaced by lean muscle, and he exuded a certain self-assurance that was missing a year ago.

"I mean, he had a lot of confidence last year," Kelce said, "but this year he has confidence in a new direction. Last year it was just confidence in, 'Hey, I'm just going to figure it out.' But now he has a lot more things figured out and now it is more confidence in taking this team to the Super Bowl."

That's something no Chiefs quarterback has done since Len Dawson in 1970.

"He's definitely a special guy," new Chiefs running back Carlos Hyde said. "Just his leadership and the way he carries himself, the way he's respected throughout the locker room."

To say nothing of what he can do on the field.

No-look tosses, left-handed throws and behind-the-back passes are all part of his repertoire, along with those lasers over the middle, perfectly lofted faded passes and downfield heaves.

"You know those jugs machines we are on after practice?" rookie running back Darwin Thompson asked, referring to machines that spit out footballs. "He's a real-life jugs machine."

Mahomes admits he had fun this past offseason, even if his longtime girlfriend had to plead with fans on social media to respect their privacy. But he's also glad to be back on the practice field — his happy place — where he is surrounded by teammates all working toward the same goal.

"Obviously when you first come to training camp you expect to win the Super Bowl," Mahomes said, "so coming in with that same mentality of, 'We're going into each and every day getting better and making sure we're getting better each day,' because in order to get to that lofty goal of the Super Bowl, you have to make sure that you maximize each and every opportunity that you have."