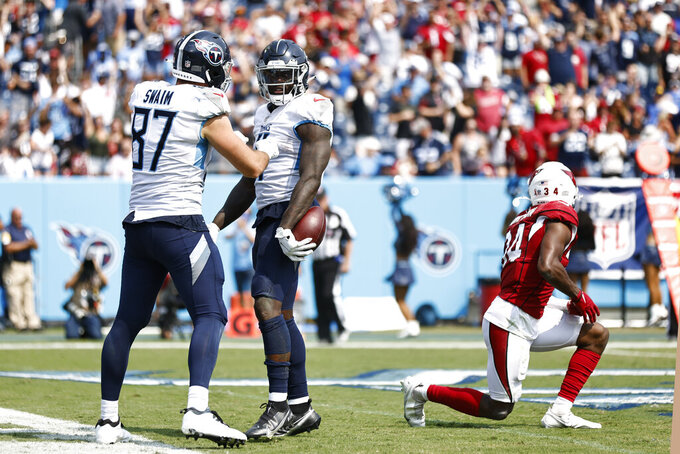 Tennessee Titans wide receiver A.J. Brown, center, is congratulated by tight end Geoff Swaim (87) after Brown scored a touchdown against the Arizona Cardinals in the second half of an NFL football game Sunday, Sept. 12, 2021, in Nashville, Tenn. (AP Photo/Wade Payne)

RENTON, Wash. (AP) — A.J. Brown and DK Metcalf haven’t been on the same field for a game that counted since the middle of the 2018 season.

That was back when the former college roommates were still playing at Ole Miss and before each became a Pro Bowl wide receiver in the NFL.

“We’ve always been competitive and the big brother at Ole Miss,” Metcalf said. “I’m looking forward to see him Sunday just get to do his thing.”

For the first time since they both reached the NFL, Brown and Metcalf will see their teams clash Sunday when the Seattle Seahawks host the Tennessee Titans.

Both Brown and Metcalf are coming off breakout seasons in 2020. Brown was a Pro Bowl selection after having 70 catches for 1,075 yards despite playing the entire season with a knee injury suffered in the opener that also cost him two games.

Metcalf’s numbers were even better in Seattle. Metcalf had 83 catches for 1,303 yards and 10 TDs, and like Brown he was a Pro Bowl selection in his second season.

The game Sunday is another chapter in a long relationship that started when they were competing against each other in high school in Mississippi, before playing together at Ole Miss.

“I’m excited for the matchup. Of course, we pushed each other in college so I’m just looking forward to the game,” Brown said.

It’s clear that in recent years the relationship has cooled for whatever reason. During the 2019 playoffs, when both Seattle and Tennessee won wild-card road games, Metcalf recalled talking with Brown the night before he had 160 yards receiving in the Seahawks' win over the Eagles.

But this week both Brown and Metcalf said it had been a while since they talked.

“We really haven’t communicated too much this season, but it’s always love between us,” Metcalf said. “Just wish him the best.”

Brown had the bigger numbers during their time at Mississippi, especially their final year together when Metcalf missed half the season with a neck injury. Brown had 85 catches for 1,320 yards and six TDs his final season for Ole Miss.

Metcalf had 39 catches as a sophomore with seven TDs and another 26 catches and five touchdowns as a junior before his injury. Current Titans cornerback Kristian Fulton was at LSU when Brown and Metcalf were at Ole Miss.

“It was definitely fun to compete against those guys. ... And they were kind of the best receiving group in the SEC at a time,” Fulton said.

Both players had very similar stat lines in Week 1, with completely opposite team results. The Titans were routed 38-13 at home by Arizona as Brown finished with four catches for 49 yards and a touchdown.

Seattle won impressively 28-16 at Indianapolis and Metcalf had four catches for 60 yards and a TD. Metcalf went the entire first half without a target before getting looks in the second half.

“I’m pretty sure both of those guys will feel like they’re a little different just because of the different teams they play on and the things that they do,” Titans linebacker Rashaan Evans said. “But both great players and really looking forward to see how both of them play this game for sure.”