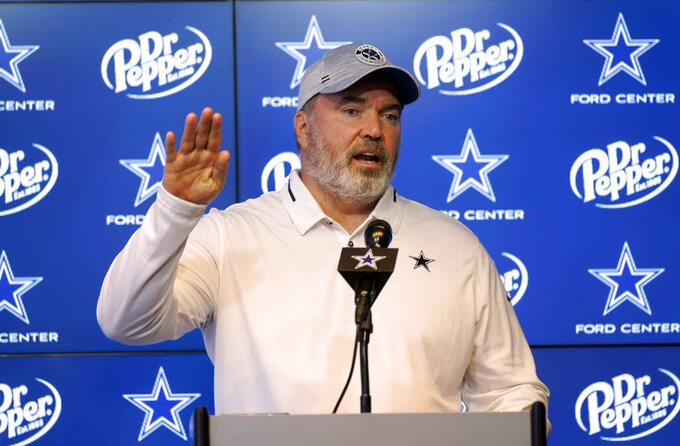 FRISCO, Texas (AP) — Dalton Schultz didn't come back for much when the Dallas tight end decided to rejoin the club for minicamp while seeking a long-term contract.

Coach Mike McCarthy called off two days of practice before a nearly six-week break heading into training camp, deciding the Cowboys were ready for California as long as they stayed on track on their own before the July 26 reporting date.

“I think the biggest thing is you have a starting line and finish line and I just felt like we crossed the finish line, particularly with the veterans,” McCarthy said Thursday. “Everything we wanted to accomplish in the offseason was completed, and really the focus turns to their individual five-week plan.”

Schultz could have been fined for skipping what was supposed to be a three-day minicamp because he signed the $10.9 million offer that came with the franchise tag.

The fifth-year player stayed away from the final two days of voluntary offseason practice last week in hopes of kick-starting talks on a contract. The sides have until July 15 to reach a long-term deal.

Schultz was mostly a spectator for what ended up being the only practice of minicamp Tuesday. McCarthy called off the remaining two practices even though he said he wasn't pleased with the work in practice last week.

The Cowboys hit golf balls at a driving range during a team-building event Tuesday, after which the veterans were turned loose for the break. Rookies had one more day of lifting and meetings Thursday.

“What we’ve accomplished in the offseason, we need to move forward,” McCarthy said. “We can’t go backward. I think they clearly understand that. That’s been the messaging throughout. This isn’t something we just talked about yesterday or today.”

Schultz's brief absence, which came not long after David Njoku signed a $57 million, four-year extension with Cleveland, was the only hint of drama during two months of work at team headquarters about 30 minutes north of Dallas.

His return for minicamp was a strong sign Schultz will be at training camp in Oxnard, California, even without a long-term contract. Since Jason Witten's departure, Schultz has turned into one of quarterback Dak Prescott's most reliable options.

“It's huge,” Prescott said Tuesday of the return of Schultz, who was second on the team to new No. 1 receiver CeeDee Lamb in catches last season with 78 for career highs of 808 yards and eight touchdowns. “Obviously just what he means to this team, his leadership, the role he stepped into to be the guy at tight end.”

McCarthy's decision to shorten minicamp came with the knowledge that many players live in the Dallas area year-round. He also knows the receivers are likely to be at Prescott's house, on a field in his backyard, before the California reporting date.

“There’s a lot of work that gets done that’s really not on the daily schedule,” McCarthy said. “I think that really plays into it. And the fact that the guys are here and they do interact with their coaches on a different level than my experience in the past, that’s all part of it.”

Because the Cowboys hired him to replace Jason Garrett not long before the start of the pandemic, McCarthy just finished his first normal offseason with a club that's coming off an NFC East title and home wild-card loss to San Francisco.

The latest playoff defeat marked the 26th consecutive season the Cowboys failed to reach even an NFC championship game since the last of the franchise's five Super Bowl titles following the 1995 season.

McCarthy, who reached four NFC title games and won a Super Bowl in Green Bay, said the return to normalcy also meant the Cowboys were in their best position going into training camp in his three offseasons.

“It’s the best I’ve felt about the football team in the preparation, focus,” McCarthy said. “You have to throw the first year out. We are clearly ahead of where we were at this time last year.”

Far enough ahead to call off practice two days early.

By Mitch Stacy 23 minutes ago
By Dennis Waszak Jr. 13 hrs ago
13 hrs ago
By Kyle Hightower 14 hrs ago
By Schuyler Dixon 15 hrs ago