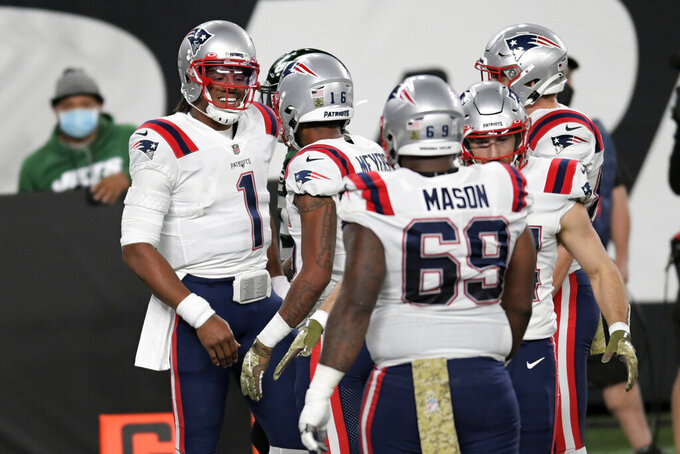 BOSTON (AP) — The Patriots knew this season would look different following the free agency departure of franchise stalwart Tom Brady to the Tampa Bay Buccaneers, coupled with several key players choosing to opt out because of COVID-19 concerns.

But few expected this.

It’s not only endangered the Patriots’ hopes of extending their run of 11 straight division titles, but left lingering questions about whether their experiment with quarterback Cam Newton will last longer than a season.

Newton missed New England’s Week 4 loss at Kansas City after testing positive for the coronavirus and struggled during three straight losses after he returned to action, throwing five interceptions, no touchdowns and posting the third-worst quarterback rating of his career (39.7) in the Patriots’ 33-6 home loss to 49ers on Oct. 25.

He rebounded Monday night in New England’s 30-27 comeback win over the Jets with his most efficient game of the season, completing 27 of 35 passes for 274 yards and running for a pair of touchdowns.

“I’m not going to lie, it felt good. But yet at the end of the day, we’re in a position where this was a division game, a much-needed win for multiple reasons,” Newton said. “Not only just for the division, but also for our confidence. We just needed one in our opinion.”

As good as it might have felt, New England still will enter the second half of its schedule ranked last in the AFC, averaging 20.8 points per game. The schedule also doesn’t do New England any favors, with matchups with Baltimore (6-2), Arizona (5-3), the Los Angeles Rams (5-3) and a second meeting with AFC East-leading Buffalo (7-2) remaining.

Belichick thinks there’s still time for his team to turn things around.

“We just got to keep working. Take it one week at a time,” he said. “I don’t think the team lacks confidence. We just got to coach better. Play better. Just keep working and keep grinding, and we’ll have better results.”

After using Newton a lot in the rushing attack in the first half of the season, offensive coordinator Josh McDaniels has kept Newton in the pocket more over the past two games. It has helped not only to keep Newton fresh in the fourth quarter, but improved the offense’s overall efficiency. Look for that to continue over the final eight games.

Receiver Jakobi Meyers is validating what the coaching staff saw in him last season when he made the roster as an undrafted rookie. After being targeted just seven times over the first seven games, his playing time has increased in the two games since Julian Edelman was placed on injured reserve with a knee injury and N’Keal Harry has been sidelined with a concussion.

Meyers had a career night against the Jets on Monday, catching a career-high 12 passes for 169 yards.

“I’m just a young guy trying to take advantage of my opportunities,” he said. “The more they give me, the more I’m going to try to do. Hopefully I can keep building and every week gets better than the week before.”

Cornerback J.C. Jackson made his third start of the season with Stephon Gilmore missing his second straight game with a knee injury. Jackson was the primary defender for two of Flacco’s TDs, beaten on passes of 50 and 15 yards to Breshad Perriman. But he redeemed himself late when his fifth interception of the season to set up the offense’s game-tying drive.

Injuries have been an ongoing issue for New England all season and is something that will follow the Patriots into the second half of 2020. Along with Edelman, Harry and Gilmore, defensive tackle Lawrence Guy (knee) and Ja’Whaun Bentley (groin) were both inactive Monday as well.

It will open opportunities for younger players, but the Patriots will need to see their health improve quickly to have a realistic shot of making the playoffs.

The Patriots have a short week to prepare for another tough challenge when they host 6-2 Baltimore. The Ravens rank fourth in the AFC, averaging 28.4 points per game.

“We’ve got a strong (team) coming up here this weekend. We’ve just got to get healthy and pair it with a great week of practice and we’ll be all right,” Newton said.