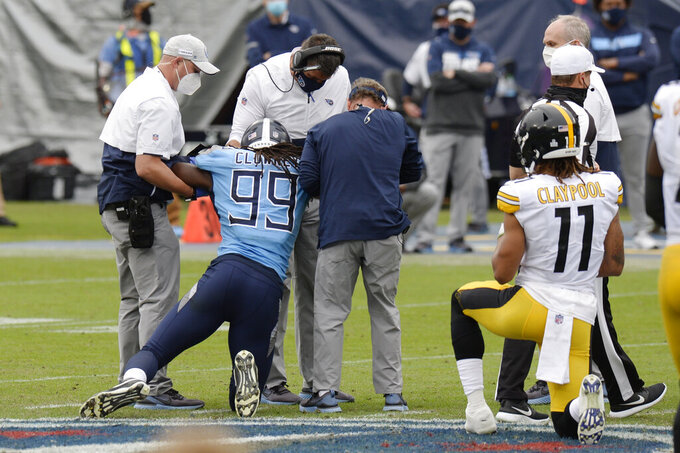 Tennessee Titans linebacker Jadeveon Clowney (99) is helped up after being injured in the second half of an NFL football game against the Pittsburgh Steelers Sunday, Oct. 25, 2020, in Nashville, Tenn. (AP Photo/Mark Zaleski)

NASHVILLE, Tenn. (AP) — The Tennessee Titans got a needed wake-up call in their first loss of the season for the issues that must be fixed on defense and special teams.

Fixing those issues is a lot easier at 5-1 sitting atop the AFC South.

“The roof is obviously not falling through," safety Kevin Byard said. "We still played good football up until this point. But like I said, it’s a game that we learn from. Obviously, we know that we’re a resilient team and we can come back from a big deficit. But it’s the consistency.”

The Titans' defensive woes cost them early as they fell behind 24-7 by halftime. The offense struggled, too, but Ryan Tannehill threw for two touchdowns, with Derrick Henry rushing for another TD as Tennessee rallied in the second half before losing 27-24 to Pittsburgh in a showdown between the AFC's last undefeated teams.

A.J. Brown, who had a season-high 153 yards receiving on six catches with a 73-yard TD, said the loss helps magnify what they didn't do well.

“When you’re winning, sometimes you sweep a lot of stuff under the rug,” Brown said. “A lot of stuff goes unnoticed because you’re winning. I think we came out, we played better in the second half. We’ve just got to play better the whole game, be more consistent.”

The Titans' resilience. This team simply does not quit, no matter what. The Titans trailed 27-7 early in the third quarter and appeared headed to a blowout loss. They responded scoring 17 straight points and had another chance late to win. This team won four of its first five with late drives in regulation or overtime.

Titans coach Mike Vrabel said hopefully that resilience is instilled in everyone by being a part of the Tennessee organization because things aren't always going to go well.

“You know that you don’t want to be there too often,” Vrabel said. "But I just told them at halftime we’re going to find out who wants to continue to compete and fight and play for their teammates, and most of them did.”

Third-down defense. The Titans are dead last in the NFL allowing teams to convert 61% of third downs, and the Steelers converted 13 of 18 third downs for a 72.2% conversion rate. Tennessee already has allowed 50 third-down conversions this season through six games after giving up only 74 all of last season.

Vrabel said all 11 players have to be work together on defense.

“We’ve got to make sure that that we’re all on the same page, that we’re coaching as well as we can and that we’re executing better," Vrabel said.

The Titans have yet to get a sack from either Jadeveon Clowney or Vic Beasley Jr., their two big additions. Tennessee has seven sacks through six games.

Jayon Brown. The inside linebacker leads Tennessee in tackles, and he got an interception against Pittsburgh to set up a field goal. He also broke up a pass in the end zone that was intercepted by teammate Amani Hooker to give the Titans a chance to win the game.

Stephen Gostkowski. The four-time Pro Bowler missed a 45-yard field goal wide right that would've forced overtime. Gostkowski now is 10 of 16 on field goals this season, which is better than last season when the Titans were an NFL-worst 8 of 18. Gostkowski has made all five attempts 50 yards or longer, but he's just 1 of 5 between 40 and 49 yards.

“I got a lot of confidence in Stephen," Vrabel said. "You know, he’d been hitting the ball well. Just unfortunately didn’t make it.”

Rookie cornerback Kristian Fulton didn't finish the game with an injured knee. Starting cornerback Adoree Jackson goes into his second week of practice working to return from injured reserve. Vrabel said they will need to see how Jackson is doing before deciding if he'll be available Sunday.

9 — The Titans lead the NFL at plus-9 in turnover margin after coming up with a season-high three interceptions.

The Titans' homestand is over, but they hit the road only for a week. They visit Cincinnati on Sunday before returning home to host Chicago and Indianapolis. Tennessee needs to continue its strong start with five of the final seven games on the road.