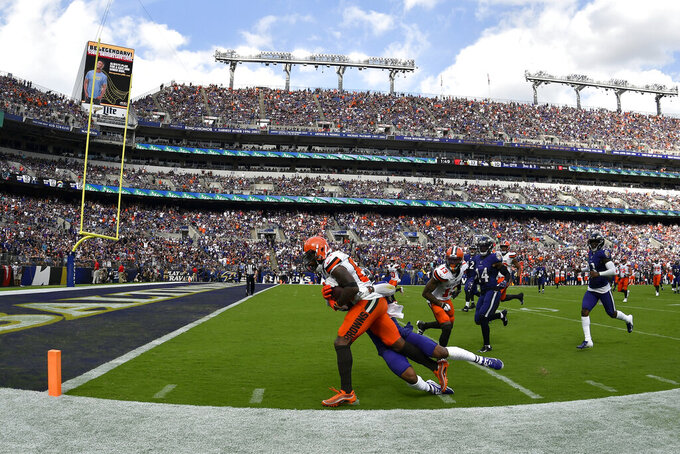 FILE - In this Sept. 29, 2019, file photo, Cleveland Browns wide receiver Jarvis Landry (80) tries to score as Baltimore Ravens defensive back DeShon Elliott makes the tackle in the third quarter of an NFL football game in Baltimore. Landry, who did not return to the game after that play, remains in concussion protocol following the game in which he caught eight passes for a career-high 167 yards in Sunday's 40-25 victory. Coach Freddie Kitchens said Thursday that Landry is still out, and it's not yet known if he'll be available Monday night when the Browns (2-2) visit the San Francisco 49ers (3-0). Landry has also been returning punts this season. (AP Photo/Brien Aho, File) 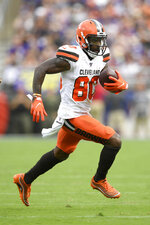 BEREA, Ohio (AP) — The Ravens couldn't stop Jarvis Landry. It took the NFL to bring him down.

Landry, who was having the best game of his career last week before suffering a concussion, cleared league protocol and returned to practice Friday as the Browns prepared to play at San Francisco on Monday night.

Landry had racked up a career-high 167 yards receiving on eight catches when he banged his head while trying to score on a long reception in the third quarter at Baltimore. Landry claims he felt fine when he got up.

"Honestly, I got to the sideline, nothing was wrong," he said. "New York called."

One of the league's supervisors asked for Landry to be checked and it was determined he had a concussion, ending his big day and threatening to keep him sidelined longer. Landry never imagined being out at all.

"No, I wasn't surprised," he said when asked if he expected to miss a game. "It was a long process, even after the game, even during the game to go through the concussion protocol, I'd never been through it before. I didn't think I would even miss the rest of that game. I thought I would be back that game, but the NFL decided that it was best that I didn't go back out there and go through the protocol first."

Landry's back and the Browns' receiving corps is at 100 percent for the first time this season, meaning Baker Mayfield will have his full complement of options against the unbeaten 49ers (3-0).

Rashard Higgins practiced this week after missing three games with a knee injury, and speedster Antonio Callaway is healthy following a four-game league suspension for a substance abuse violation and a high ankle sprain.

Callaway's insertion gives the Browns another deep threat to go along with Odell Beckham Jr., who has mostly seen double-coverage in his first four games with the Browns (2-2).

For Callaway, this is another chance to prove he's matured and grown from prior mistakes. He's running out of chances with the Browns, who were aware of his past issues at Florida when they drafted him in the fourth round last year.

Callaway, who had 43 catches for 586 yards and five touchdowns last season, indicated he'll be handling punt returns. Landry has been in that role so far this season.

The soft-spoken 22-year-old Callaway said being around stars like Landry and Beckham has helped him become a better player.

"You can't do nothing but learn from those guys," he said. "Both of them work hard, put in extra work. You should want to be around guys like that. I work hard, but you see like there's a next step, a next level to work hard."

Landry has been supportive of Callaway, and feels he's eager to make a mark.

"He's been through a lot, man," Landry said. "He's battled through injuries as well and I think this is his opportunity with all the hard work that he put in in the offseason to really come up and step up for the team. We're excited to see what he's going to do this week and for the rest of the season."

NOTES: CBs Denzel Ward and Greedy Williams remain sidelined with hamstring injuries and are doubtful for Monday's game. ... LB Willie Harvey (shoulder) was placed on injured reserve, opening a roster spot for Callaway to be activated. ... Landry laughed about a 65-yard reception that would have been a TD, but he stumbled over his own feet. "The most un-athletic play ever in my career, I promise," he said. "I wish I had that one back."