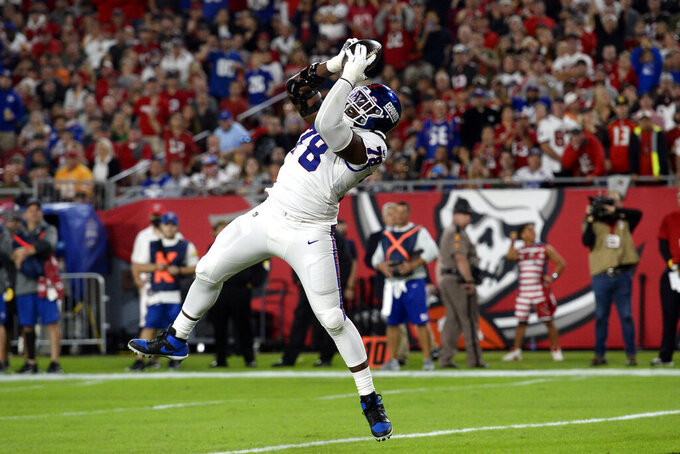 EAST RUTHERFORD, N.J. (AP) — In an effort to spark an anemic offense with the season teetering on the brink of fiasco, the New York Giants fired offensive coordinator Jason Garrett after a dreadful performance in a nationally televised game against the Tampa Bay Buccaneers.

Coach Joe Judge confirmed the dismissal of Garrett on Tuesday, noting the offense was not scoring enough points.

Judge said the coaching staff would combine to make an offensive game plan for the contest against the Philadelphia Eagles (5-6) on Sunday at MetLife Stadium. He refused to say who would call the plays, noting every member of the staff is an option, including himself.

The Giants (3-7) were embarrassed on Monday night, dropping a 30-10 decision to the Bucs. After the game, Judge said the team has too many good players not to be scoring, giving an indication changes were coming.

Judge said the move to fire Garrett was not a snap decision. He noted he was equally responsible for the offensive failures because he is the head coach.

“There was no boiling point,” Judge said. “It was just a move we feel we have to make at this point to help the team go further.”

While disappointed with the decision, Garrett said results were not what he wanted. He thanked management for the chance to work and the coaching staff and players for their professionalism and fight.

“One of the things that motivated me to accept this position was the opportunity to help rebuild the Giants into a contending team,” Garrett said in a statement released by the team. “We knew there would be many challenges. My expectations for our offense were much greater than what our results have been, and I accept full responsibility for that.”

Judge was hired by the Giants in early January 2020. One of his first moves was to hire Garrett, who had been let go by the Cowboys after 10 seasons as their head coach.

New York has scored 189 points this season. It has struggled in the red zone and in five of its seven losses has a combined 65 points.

The Giants finished with 215 total yards Monday night, the second-lowest total of the 26-game Judge era. They gained 159 yards in a loss to Arizona on Dec. 13, 2020. Only one of the Giants’ 54 offensive plays gained more than 16 yards against Tampa Bay.

The Giants’ 15 first downs were a season low and their fewest since they had 14 against Cleveland last Dec. 20. They have 31 first downs in their last two games, including 16 in the victory against Las Vegas on Nov. 7.

New York rushed for 66 yards, its second-lowest total of the season; the Giants ran for 60 yards in their season-opening loss to Denver. New York's 24:21 time of possession was a season low.

The offense has been devastated by injuries, particularly on the line. Center Nick Gates (broken leg) and left guard Shane Lemieux (knee) played two and one game, respectively. Standout left tackle Andrew Thomas has missed games with foot and ankle injuries, and guard Will Hernandez and tackle Nate Solder are playing on the right this season, a new side for them.

It's led to breakdowns and forced quarterback Daniel Jones to run a lot more than he would want.

Judge is hoping the change will help the players be more successful.

“There will be a lot of the same players out there and there will still be elements of the playbook that we'll have out there,” Judge said. “We'll see if new wrinkles develop and new concepts may be included. Ultimately, we've put the players in position to execute, but we have to find something to give us an opportunity to change things up a little bit.”

Judge said he spoke with some of his captains Tuesday, but most of the players had the day off.