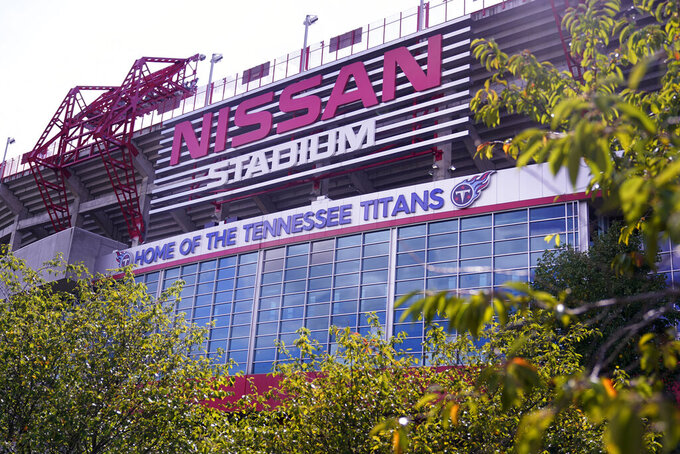 NASHVILLE, Tenn. (AP) — The Tennessee Titans now know when they are rescheduled to play the Pittsburgh Steelers after the first NFL game postponed by a COVID-19 outbreak.

Getting back into their own building depends on the results of continued testing. The Titans' outbreak expanded by two more players testing positive Friday, pushing the team's total to 14 within the past week.

The outbreak forced the NFL to postpone Tennessee's game from Sunday to Oct. 25 in Week 7, forcing the Steelers into their unplanned bye. Pittsburgh now will play Baltimore on Nov. 1 with the Ravens' bye now pushed to Week 7 instead of Week 8, which had been the bye for both teams.

Coach Mike Vrabel has said he's very confident that the Titans have followed the league protocols precisely and that nobody was to blame for this outbreak during a pandemic.

“We continue to follow protocol from the NFL that was set forth, and that continues to change and adapt and adjust,” Vrabel said Thursday. “Whatever the NFL tells us that we’re required to do and we’re supposed to do as positive tests come in, that’s what we’ll do.”

The NFL already had postponed the Titans' game Sunday against Pittsburgh. That came a day after the league said it hoped the teams would play Monday or Tuesday. But another positive test result Thursday led to the postponement and Friday's rescheduling.

Then two additional positive test results came in Friday, a person told The Associated Press, speaking on condition of anonymity because neither the NFL nor the Titans had announced the latest results. Each new positive test requires the team’s infectious control officer to track down everyone in contact with those people.

The Minnesota Vikings (0-3) again had no positive test results Friday, leaving them on target to visit Houston (0-3) on Sunday as scheduled after losing 31-30 to the Titans last week. The Viking returned to work and practice at their facility on Thursday.

The Titans (3-0) instead find themselves on an unexpected bye, hoping to return to work inside their own building Monday or Tuesday. But further testing could delay that return, and more positives could jeopardize the Titans' next scheduled game Oct. 11 against the Buffalo Bills in Nashville.

With the NFL rescheduling their game with the Steelers, the Titans announced Friday that capacity will be expanded as well from the planned 10%, or about 7,000, to 15% with 3,000 more seats available.

Tennessee's outbreak started with a defensive back on the practice squad added to the reserve/COVID-19 list on Sept. 24. Then outside linebackers coach Shane Bowen's test result came back positive on Saturday, preventing him from traveling with Tennessee to Minnesota.

With the new cases, the Titans’ total is now 14: seven players and seven other organization members just since last Saturday. Vrabel said he’s confident the Titans have followed the contact tracing protocol to identify anyone at risk from being close together.

The NFL alerted teams Thursday of new procedures to follow when dealing with an outbreak or having been exposed to a team having an outbreak.

Minnesota coach Mike Zimmer said he's proud of how his Vikings have handled the changes in stride. Zimmer says there haven't been the usual complaints and griping.

“We’ve obviously had to do a lot of extra things that we don’t normally do – point-of-care contact test, our normal testing, then you’ve got to sit in your car and wait until you get to go into the facility," Zimmer said Friday. “We’ve had to adjust schedules at times, but they’ve handled it really well.”