Patriots, Jones end season with a dud in 47-17 loss to Bills 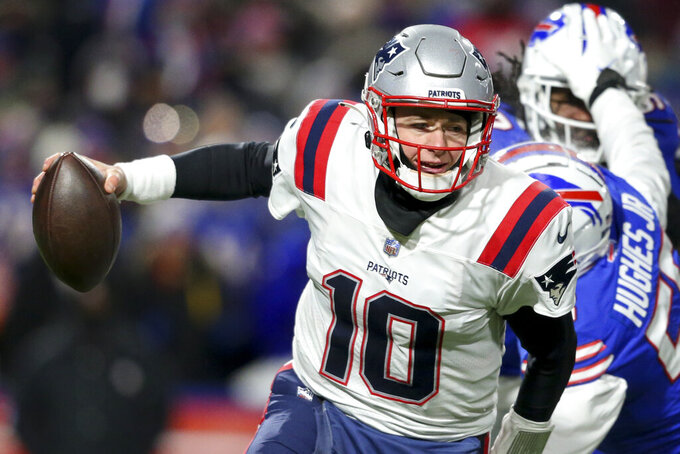 ORCHARD PARK, N.Y. (AP) — After gaining so much ground during Mac Jones’ rookie season, the New England Patriots faltered at the finish.

Throttled 47-17 by the Buffalo Bills in a wild-card playoff game on Saturday night, the loss showed how much progress the Patriots still need to make to close the gap on their AFC East rivals.

“Losing is terrible,” Jones said. “None of us wanted to do that tonight. But there’s nothing we can do about it now. There’s a lot to look forward to and positive and learn from.”

Jones and the Patriots made strides turning around their season following a 2-4 start, putting together a seven-game win streak to make the playoffs for the first time in two seasons since Tom Brady left New England for Tampa Bay.

But their progress stalled after a 14-10 win at Buffalo in Week 13 put them atop the division standings. The Patriots struggled coming out of their bye week, losing three of four, before suffering their worst postseason defeat since a 46-10 loss to the 1985 Chicago Bears.

The loss was the most lopsided in the playoffs during Bill Belichick's tenure, which began in 2000, and second-worst overall after Buffalo opened the 2003 season with a 31-0 victory.

Suddenly, the tables have begun turning on a proud Patriots franchise which won 17 division titles and six Super Bowls under Belichick, and was 35-5 against Buffalo from 2000 to 2019. New England has now dropped four of the last five meetings with Buffalo, which has staked its claim to the division by winning two straight titles.

The Bills dominated the Patriots in this one, much like they were once dominated by New England.

Buffalo became the NFL's first team to score touchdowns on each of its seven possessions not ending with a kneeldown. And the 47 points scored were the most against a Belichick-coached Patriots team.

The struggles carried over from the final weeks of the season.

“If I could, I would’ve done everything to try to get it turned around,” defensive captain Devin McCourty said. “Going from a team that was 2-4, just fighting, trying to get back to being the team that was atop the AFC at one point. You have to execute at a high level once that happens. And we didn’t, for whatever reasons. We’ll have a lot of time to think about that.”

Jones was the first rookie quarterback to start a playoff game for the Patriots. He finished 24 of 38 passing for 232 yards with two touchdowns, and was intercepted twice while taking two sacks.

“We didn’t have a chance to win the game, and it starts with me,” Jones said. “Just getting momentum early, and not putting ourselves in that position.”

The Patriots fell to 4-7 this season when failing to score first and 2-7 when going scoreless in the first quarter.

“Embarrassing,” was how McCourty characterized the effort from the Patriots defense. “We really shouldn’t perform like that.”

Whatever momentum the the Patriots’ offense generated was snuffed out by turnovers. Jones was intercepted by Micah Hyde on a deep pass to Nelson Agholor in the end zone on New England’s first possession. And he had a tipped pass picked off by Levi Wallace on the opening drive of the second half.

“I can make a better throw,” Jones said. “Our goal was not to turn the ball over. And it happened. That’s just a part of the game, I guess. But it’s something I can learn from.”

Jones vowed that he and the Patriots will come back better next season.

“I always related it back to being a pilot,” he said. “If you are a pilot and you have only flown so many times, when you have hundreds of flight hours, it’s just an everyday thing for you. For me, obviously I was a rookie, and I played like that sometimes. And I shouldn’t have. I can play better.”