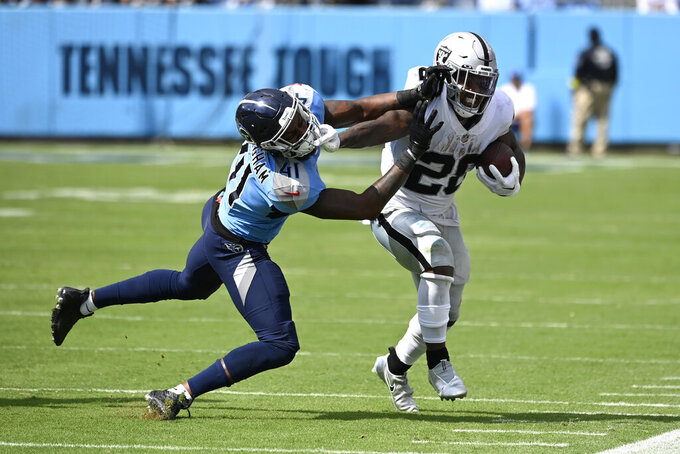 Las Vegas Raiders running back Josh Jacobs (28) tries to get around Tennessee Titans linebacker Zach Cunningham (41) in the second half of an NFL football game Sunday, Sept. 25, 2022, in Nashville, Tenn. (AP Photo/Mark Zaleski)

HENDERSON, Nev. (AP) — The balanced offense that Josh McDaniels was supposed to bring to Las Vegas when he took over the Raiders hasn't materialized.

While much of the focus has been on how involved Davante Adams has been each week in the passing game, the Raiders have barely run the ball at all in a somewhat surprising development.

The Raiders are one of two teams in the NFL to run on fewer than 30% of their offensive plays with their 29.1% rush rate second only to the New York Jets (25.7%), who have run only one offensive play all season while leading a game.

The 53 total attempts are the fewest for the Raiders through three games since 2003 when they had a franchise-low 43. The only other season with fewer was in 1963 when they had 52.

“I’ve tried to fight the fight of maintaining balance when you’re behind by two scores,” McDaniels said. “I tried to do it (Sunday) at the beginning of the third quarter (in Tennessee), and we had some success with it. There gets to a point every game where that becomes a lot harder to do because you have multiple scores you need, and the time becomes a factor.”

The Raiders (0-3) haven't run the ball much no matter the situation, running the ball less than one-third of the time when winning and when losing.

But getting out to an early lead could help as the Raiders have played from behind in two of their games.

“We got to maintain more balance in the game, and I have to do a better job of trying to get us to start faster as a football team,” McDaniels said.

The Raiders have five running backs and one fullback on the active roster in a sign they want to be a run-heavy team, but Josh Jacobs is the only back to get much work early in the season.

Jacobs has 42 carries for 192 yards, while the other running backs have combined for seven carries for 26 yards. Brandon Bolden is the only other back to run it more than once so far this season with six carries for 24 yards.

“I leave a lot of games feeling like I did a lot of conditioning,” Jacobs said. “I don’t really be too banged up. I had a couple of games where I didn’t even leave with cuts or anything. ... Really, I just try to do what I do when it’s my turn. Kind of give them a little confidence in what I do.

During McDaniels’ coaching career — as an offensive coordinator or head coach — his offenses have never rushed fewer than 71 times through the first three games of a campaign.

The Patriots ranked 11th in run rate in the first three games of the season during the past decade when McDaniels was calling plays there.

The Raiders haven't even run the ball much near the goal line with 27 of their 37 plays from the red zone being passes. They have struggled finishing drives, converting 6 of 13 of red zone trips into touchdowns for the seventh worst rate in the league.

They face a Denver defense on Sunday that has allowed only one touchdown on four red zone trips.

“I look at a couple opportunities in the running game we had to potentially put it into the running game before it got to a third down and goal, or those kinds of situations,” McDaniels said. “We were very close a couple of times to getting it in, in the run game. ... We have to do a good job of executing down there, got to have a good plan, give the players an opportunity to be successful."