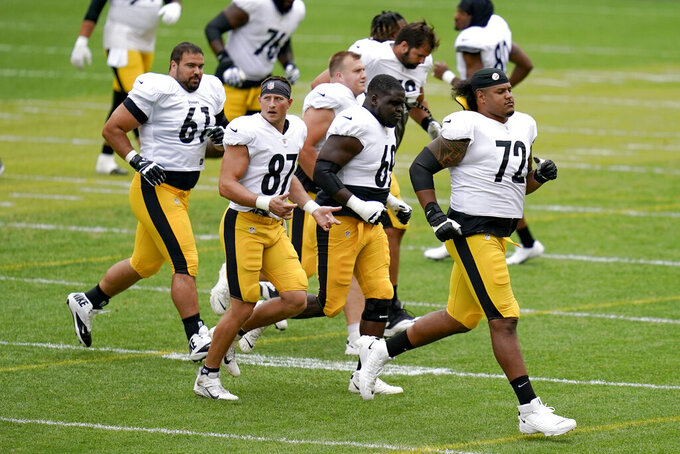 FILE - Pittsburgh Steelers offensive tackle Zach Banner (72) warms up with the offense during an NFL football training camp practice, Monday, Aug. 31, 2020, in Pittsburgh. Banner grew tired of being too big, too slow and too sloppy to become an NFL starter. The Pittsburgh Steelers newly minted right tackle credits a new mindset and a new body for his evolution from project to the first string. (AP Photo/Keith Srakocic, File)

PITTSBURGH (AP) — Zach Banner looks back at the early stages of his NFL career and doesn't like what he sees: an overweight, poorly disciplined kid letting the opportunity of a lifetime slip through his fingers.

A fourth-round pick by Indianapolis in 2017, Banner was cut by the Colts at the end of training camp. He landed in Cleveland, where he spent most of one forgettable season on the sideline, unable to crack the starting lineup on a team that failed to win a single game. When he comes across pictures from that time, all he sees is disarray.

“Look how big I looked,” Banner said. "My hair was trash, all that stuff. It feels good to be a 26-year-old guy looking down at my 23-year-old self because that means we’re making progress and we’re getting better.”

The player who arrived in Pittsburgh in summer 2018 as a 6-foot-8, 360-pound project has now worked his way up to the first string. When the Steelers open the 2020 season at the New York Giants on Monday night, it will be Banner lining up at right tackle, a testament to the team's faith in him and Banner's faith in himself.

Banner realized during the offseason that if he wanted to stick around, he needed to get serious. He visited clinical pharmacist Jim LaValle, who did bloodwork that revealed just how damaging Banner's diet was to his massive body. He worked with his personal trainer to get leaner and relied on brother Xavier to keep him in check during the lengthy shutdown due to the COVID-19 pandemic.

Banner would occasionally suggest going out to eat to break up the monotony. Xavier told him to drop the keys and grab a spatula.

“(He'd say) 'No, you're going to cook like you've been doing,'" Banner said. "I think when you have people around you who care about you like that, not only from a science perspective but a family perspective, I think that’s the best thing. I kind of closed my circle this offseason and I have no regrets about it.”

Banner arrived at training camp 30 pounds lighter in preparation for competing against Chukwuma Okorafor for the right tackle spot created when Matt Feiler moved to left guard. While the coaching staff was careful not to tip its hand, Banner received a call Wednesday saying the job was his. His celebration was modest. He called his parents. He chilled with his dog. He didn't view it as the end of a competition but instead the beginning.

“We can celebrate and congrats and all this stuff now, but if I go out on Monday night and I suck, I’m done,” he said.

Offensive coordinator Randy Fichtner called Banner a “perfect example” of what a player can do when he commits to taking care of his body. Banner is a fixture in the team's weight room, often racing with center Maurkice Pouncey to be the first to arrive. He is happy to shed his role as a third “jumbo” tight end, a position that made him a mini cult hero last fall at Heinz Field whenever the referee would announce “No. 72 is eligible."

Banner never did go into a route for a pass. And Fichtner declared Banner's dream of dancing in the end zone after scoring a touchdown officially dead. Banner is just fine with the arrangement, one that was hard to imagine when Colts general manager Chris Ballard fined him $6,000 for arriving to his first training camp 10 pounds too heavy.

While Ballard told Banner's family that he believed he could slip Banner through waivers and place him on the practice squad, it didn't change the fact that Ballard felt Banner wasn't good enough to help the Colts in 2017. It was a sobering moment that Banner believes was vital to his development.

“All in all if he was here right now, I would thank him,” he said. “Because the harsh reality (is), check the tape. I move better.”

The first true test of Banner's progress will play out on national television next week, when the son of longtime NFL offensive lineman Lincoln Kennedy will step into his own. Confident but appreciative. Eager but prepared. Optimistic but wary.