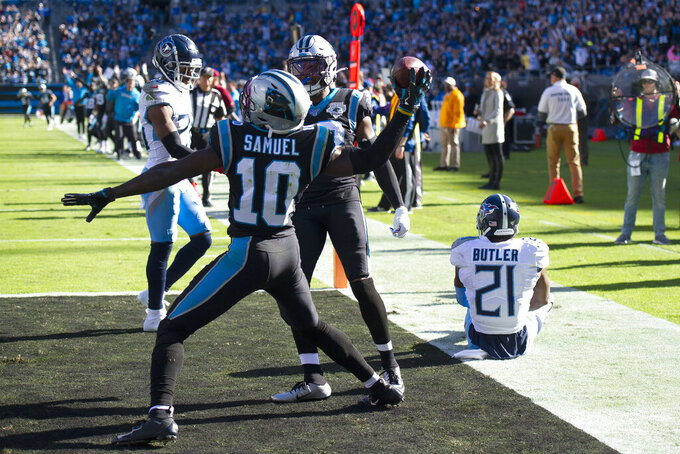 Carolina Panthers wide receiver Curtis Samuel (10) celebrates his touchdown against the Tennessee Titans as cornerback Malcolm Butler (21) sits on the turf during the first half of an NFL football game in Charlotte, N.C., Sunday, Nov. 3, 2019. (AP Photo/Mike McCarn)

NASHVILLE, Tenn. (AP) — The Tennessee Titans have placed cornerback Malcolm Butler on injured reserve after he injured his left wrist Sunday against the Carolina Panthers.

Butler got hurt when Carolina's Curtis Samuel landed on his arm while making a touchdown catch late in the first half in Tennessee's 30-20 loss. The Titans signed the former New England Patriots defensive back in March 2018 to a five-year deal worth more than $60 million, including over $30 million guaranteed.

Smith has played four games for the Titans this season and has made three special-teams tackles. The Titans waived him on Saturday.

Smith has appeared in 19 games overall for the Titans.