Texans, Colts meet in playoffs after turning around seasons 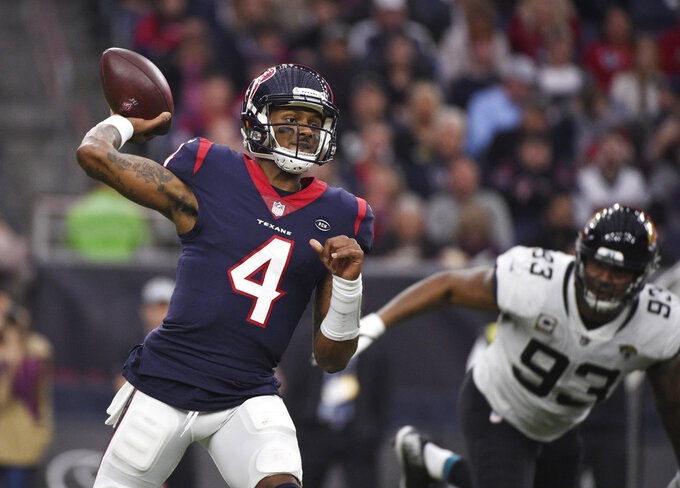 FILE - In this Dec. 30, 2018, file photo, Houston Texans quarterback Deshaun Watson (4) throws a pass against the Jacksonville Jaguars during the first half of an NFL football game in Houston. Watson will make his playoff debut on Saturday against the Indianapolis Colts in his second year in the NFL. (AP Photo/Eric Christian Smith, File)

HOUSTON (AP) — Saturday's wild-card game between the Houston Texans and Indianapolis Colts is a matchup that seemed improbable early this season after Houston dropped its first three games and the Colts limped to a 1-5 start.

Instead of letting their tough starts lead to disappointing years, these teams which both finished 4-12 last season turned things around to lead the AFC South and charge into the postseason.

Houston's rebound began at the expense of the Colts (10-6) and it was thanks in part to a controversial call by Indianapolis coach Frank Reich in overtime. The game was tied 34-34 when, instead of punting on fourth-and-4 from his 43-yard line and likely settling for a tie, Reich called for a short pass from Andrew Luck to Chester Rogers. Luck's pass fell incomplete, Houston got a 24-yard completion on the next play, and Ka'imi Fairbairn made a 37-yard field goal as time expired to give the Texans (11-5) a 37-34 victory.

"We knew that to be able to come out on the winning end of that game was a big thing for us, but that's a long time ago," Houston coach Bill O'Brien said. "The teams have evolved over time, so it's a new ballgame now."

The win was the first of nine straight for Houston. The Texans didn't lose again until a visit from the Colts on Dec. 9, a 24-21 Indy victory. Houston then won two of its last three games, capped by a 20-3 victory over the Jaguars on Sunday to clinch the division — and become the sixth team since 1980 and first since 1998 to make the playoffs after a 0-3 start.

The Colts' loss to Houston in Week 4 was the second of four straight that dropped them to 1-5. Indianapolis then won its next five and nine of its last 10 to make its first playoff appearance since a 2014 AFC championship game loss at New England. Yes, the "Deflategate" game.

The Colts are the third team in NFL history to reach the postseason after losing five of the first six games.

These teams have more in common than their difficult starts. They're both led by a player making a comeback after an injury.

Luck returned after missing the 2017 season with a shoulder injury to throw for 4,593 yards and rank second in the NFL with 39 touchdown passes. His best games this season have come against Houston, piling up 863 yards passing with six touchdowns.

Trying to slow him down on Saturday will be Houston's comeback star J.J. Watt, who played all 16 games after starting just eight games combined in the previous two years because of back surgeries and a broken leg. Watt led the AFC with 16 sacks, had 25 quarterback hits, 18 tackles for losses and forced a career-high seven fumbles, which tied for most in the NFL.

Watt said Luck has been getting rid of the ball quicker this season, which makes his job as a pass rusher much more difficult.

Some things to know about Houston's game against Indianapolis:

Some of T.Y. Hilton's most memorable moments have come against the Texans — especially when he visits Houston.

The Colts' top receiver has caught 41 passes for 933 yards with seven TDs in seven games at NRG Stadium, and in the last two trips to Houston Hilton has 14 receptions for 374 yards and two TDs. So even though he's been hobbled by a bad ankle, which he initially injured at Houston on Dec. 9, Hilton insists he'll be fine Sunday.

"That's probably why it's starting to feel better," Hilton joked earlier this week when asked about playing in Houston for the second time in a month.

Houston quarterback Deshaun Watson will make his playoff debut in his second year in the NFL. Don't expect the 12th overall pick in the 2017 draft to be daunted by the challenge after he played plenty of huge games at Clemson, highlighted by leading his team to the national title game twice. The Tigers lost to Alabama when Watson was a sophomore before he helped Clemson beat Alabama 35-31 for the 2016 national championship.

"It's just another opportunity for myself and this whole team to be able to show what we've got and put in the work," Watson said. "I've played in a lot of big games before in college and stuff, but you can't really pit college playoffs with the NFL. This is the hardest business, top-notch. It's a whole new season, a whole new speed of game. So it's going to be new for me (and) it's going to be a lot of fun."

Indy didn't just rebound from a 1-5 start to make the playoffs. It rewrote the book.

While the oft-criticized offensive line allowed a league-low 18 sacks after giving up a league-high 56 in 2017, the biggest change came on defense, where the Colts were ranked No. 11. They had the league's leading tackler, 26 takeaways, allowed only 16.4 points over the final eight games, and were one of three teams that didn't allow a 100-yard rusher all season.

The Colts know it will take more of the same to advance.

"The last time we did a good job, that was great for us, but this is a new challenge this week," Reich said when asked about defending Pro Bowl receiver DeAndre Hopkins. "I'm sure they are going to try to get him going."