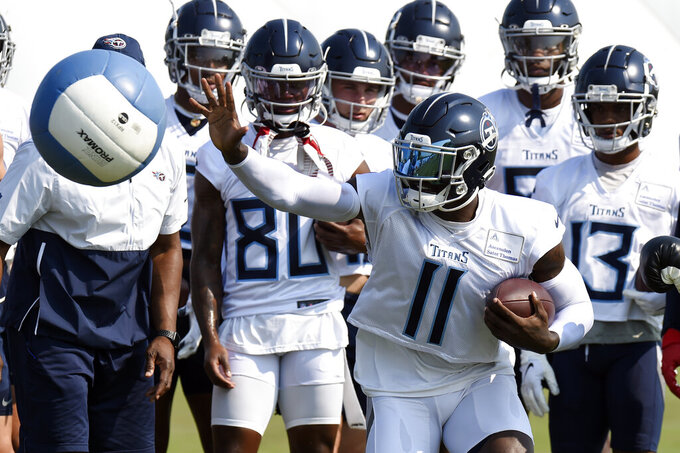 “I’m pretty sure everybody can tell I’m healthy,” Brown said Saturday. “Soon, everybody else will know, too.”

The acquisition of Julio Jones from the Atlanta Falcons dominated the Titans’ offseason, as the team added a seven-time Pro Bowl wide receiver to an already prolific offense. But Brown, has grabbed the spotlight in the early days of camp, looking healthy again and all but unstoppable.

It’s easy to see the joy in Brown’s game again, after he underwent two minor knee surgeries during the offseason. An ankle injury also troubled Brown, who missed two full games and didn’t start in two others last season. He still earned a Pro Bowl nod in his second season after catching 70 passes for 1,075 yards and 11 touchdowns.

“As far as practice, I’m so comfortable” Brown said. “I feel like I can do whatever I want to do when I want to do it. My confidence is through the roof.”

Part of Brown’s enthusiasm also stems from Jones' arrival to the Titans after 10 years in Atlanta, where he piled up 848 catches for 12,896 yards and 60 TDs. Brown, 24, has long been an admirer of the 32-year-old Jones, so having him in the same receiving room now is a thrill.

“I’m really excited, to be honest,” Brown said. “At the end of the day, I’ve still got to do my job. But he’s going to be in the Hall of Fame. That’s a Hall of Fame receiver on the other side of me. So you know I’ve got to pick my game up. We’re only going to make each other better.”

Jones played in just nine games in 2020, hampered by hamstring and foot injuries. The Titans are taking a gradual approach with him in training camp, monitoring his workload early on. Jones for the most part has taken part only in individual drills, sitting out team drills.

Still, Jones sounds as excited teaming with Brown as his younger counterpart is about the combination.

“It’s just been amazing,” Jones said of working with Brown. “I was watching him from afar. But just being in the building with him now, just seeing his work ethic, seeing everything he does, he’s a true professional.”

Jones and Brown are both getting in extra work with Ryan Tannehill, catching passes from the Titans’ veteran quarterback at the end of various individual drills. It should help the transition for Jones, who played with Falcons quarterback Matt Ryan his entire career.

“Just for me being out there, (it’s about) the right route depths, getting in and out of breaks, stuff like that,” Jones said. “That’s it, that’s how you build trust at the end of the day.”

The Brown-Jones duo aims to form one of the league’s most explosive tandems by the time the season starts.