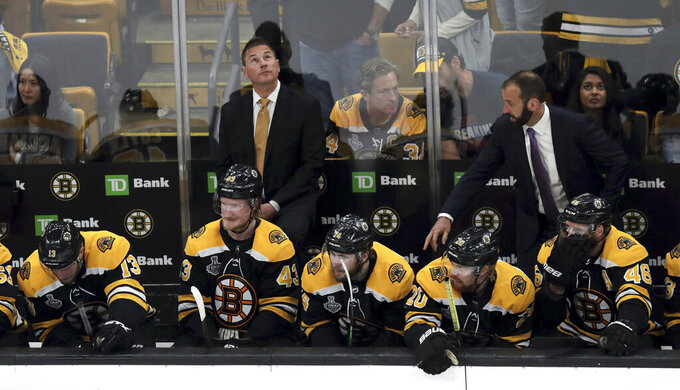 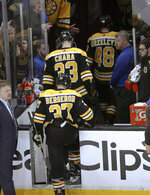 BOSTON (AP) — There won't be a third championship parade through the Back Bay, and it seems so long ago that people in the city were dreaming of a Boston Slam.

After back-to-back wins by the Red Sox and the Patriots, the never-satisfied fans in this town coveted a chance to sweep the major sports prizes. But the Celtics didn't cooperate and, on Wednesday night, the Bruins fell one game short of winning the city's 13th title since 2002.

"It's a heartbreaker," Bruins forward Brad Marchand said after St. Louis won Game 7 of the Stanley Cup Final 4-1. "It's tough to describe. You know, they just took our dream, our lifetime dream from us, and everything we've worked for our entire lives. And it's 60 minutes away from that. You can't describe it."

Ryan O'Reilly scored for the fourth straight game in the Stanley Cup Final — tying Wayne Gretzky's record — and Jordan Binnington stopped 32 shots for St. Louis, which won its first NHL championship. The Blues, who joined the league in 1967, had not been in the final since losing on Bobby Orr's flying-through-the-air winner in 1970.

Boston has had plenty of success, of course.

The Patriots have won six Super Bowls, their first in 2002 against the St. Louis Rams. The Red Sox ended their 86-year championship drought by beating the Cardinals in 2004, then beat them again in 2013 while racking up four World Series titles in this millennium.

The Celtics beat the St. Louis Hawks three times for the NBA championship from 1957-61 while hanging 17 banners from the old and new Boston Garden rafters, their most recent in 2008. The Bruins last won it all in '11.

Five players remain from that team who know what it's like to skate off with the Stanley Cup. But they also remember the pain of losing, when they returned to the final two years later and lost to the Chicago Blackhawks.

"I'll never get over this," said Marchand, who was among the players seen to be crying on the ice while they waited to shake hands with the Blues. "I'm not over '13 yet. This hurts more than that. It's not something you ever forget."

To get back again, the Bruins have some decisions to make.

Forward David Backes, who is owed $12 million over the next two seasons, is 35 and was a healthy scratch for much of the series against St. Louis and could be a candidate for a buyout.

Chara, who is 42, said he thinks the team has a chance to make another long playoff run.

"We just came short," he said. "Sometimes those downs make you stronger, and I believe this team still has potential to get back to the final and get it done."

But the Bruins also understand that nothing is certain.

"There are guys that this could have been our last shot," Bergeron said. "This stings even more."