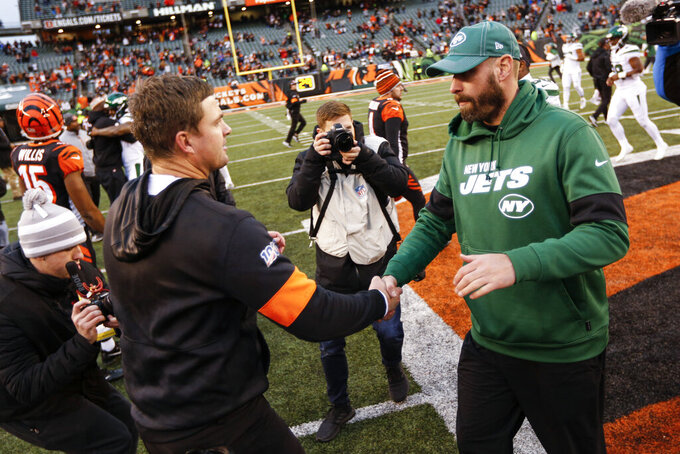 CINCINNATI (AP) — Zac Taylor can’t find the words for the long, tortuous wait to get his first win as the Cincinnati Bengals head coach.

“No, you can’t describe it,” Taylor said.

The 36-year-old coach pumped his right fist after Andy Dalton took the knee for the last time Sunday, closing out a 22-6 win over the New York Jets that brought long-awaited relief. Carlos Dunlap and Sam Hubbard drenched Taylor with ice water. What was left of the smallest crowd in Paul Brown Stadium history celebrated the end of the longest losing streak in franchise history.

So, the Bengals (1-11) are no longer the example of utter futility in the NFL. They’ve even lost some of their edge for the first overall pick — the New York Giants are only one game better, and the Lions, Falcons, Cardinals, Redskins and Dolphins each have three wins.

However, things are still gloomy in Cincinnati, as attested by that record-low attendance of 39,804 on Sunday. At least the players and coaches no longer have the specter of 0-16 hanging over their heads. With two games left against the struggling Browns (5-7) and one in Miami, there’s a possibility for more celebrations before Cincinnati closes out its fourth straight losing season.

“It’s been a rough patch, but it’s going to get better,” running back Joe Mixon said.

The Bengals have done this before, of course. They’ve mastered the season-scuttling start followed by winning a few at the end to spark hopes of better days ahead. For now, they’re content to enjoy that first one.

The offensive line is still a work in progress. Cordy Glenn returned from a concussion and a one-game team suspension and has been solid at left tackle the past two games. Rookie Michael Jordan returned as the starting left guard Sunday with Billy Price limited by a bad back. Although the Bengals rushed for only 44 yards against the NFL’s best run-stuffing defense, the line protected Andy Dalton most of the game. He was sacked once and hit twice, a dramatic improvement from earlier in the season.

Dalton got over his bitterness from a three-game benching so the organization could take a look at rookie Ryan Finley. Given a chance to start again, Dalton played an impressive game. He’ll get more chances down the stretch to demonstrate to someone — possibly another team next season — that he’s capable of winning if he’s surrounded by a solid unit. Dalton has one more year on his deal, but the Bengals are weighing their options knowing they’ll have a high draft pick next year.

It’s tough to fault Taylor after his first win, but it’s clear the Bengals had a much better chance of getting the victory earlier if he’d have stayed with Dalton. Finley completed only 47 percent of his passes overall and had critical turnovers in a 17-10 loss at Oakland and a 16-10 loss to Pittsburgh.

Receiver John Ross is expected to play in Cleveland next Sunday after returning from a shoulder injury. There’s no indication that receiver A.J. Green will be ready — he’s missed all 12 games while recovering from ankle surgery during training camp.

4 — The number of years since the Bengals have had an actual winning streak. They opened the 2015 season with eight wins and finished by losing to the Steelers in the first round of the playoffs. Since then, they’ve won back-to-back games only six times in a season and never as many as three in a row.

Try to beat the Browns and get their first AFC North win of the season. They’ve dropped nine straight division games.