1st-place Vikings back from bye to host revived Cardinals 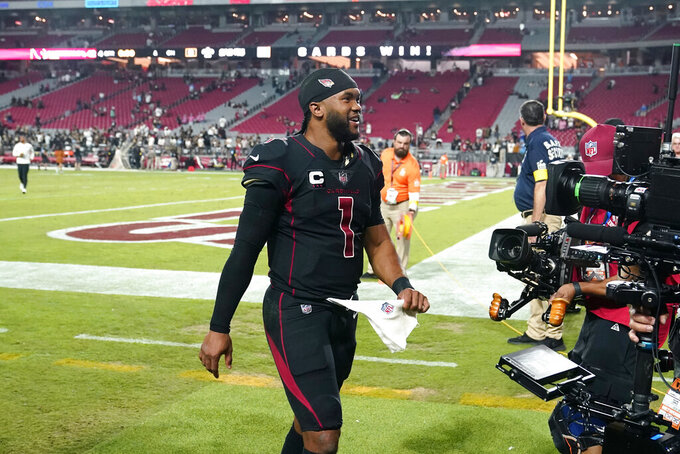 OPENING LINE: Vikings by 3½, according to FanDuel Sportsbook.

TURNOVER DIFFERENTIAL: Cardinals plus-5, Vikings plus-4.

CARDINALS PLAYER TO WATCH: WR DeAndre Hopkins. In his return from a six-game suspension, Hopkins had 10 catches for 103 yards last week to help rejuvenate the offense against New Orleans. The Cardinals are 9-2 with Hopkins on the field and 5-9 without him since he arrived last year.

VIKINGS PLAYER TO WATCH: WR Justin Jefferson. Already with the most career yards (3,670) through three seasons in NFL history, with 11 games to build on his total, Jefferson is on pace to break the franchise single-season record held by Randy Moss with 1,632 yards in 2003. Jefferson hasn't scored since his two TDs in the opener.

KEY MATCHUP: Cardinals QB Kyler Murray vs. Vikings DL/LBs. Murray passed for 400 yards and three TDs and rushed for 31 yards and a score against the Vikings last year. He has just seven TD passes in seven games this season. Like Philadelphia's Jalen Hurts and Chicago's Justin Fields earlier this year, Murray is the type of elusive QB that Minnesota has been vulnerable against.

KEY INJURIES: The Cardinals are without WR Marquise Brown (foot) for at least three more games, and LG Justin Pugh (knee) is out for the season. RB James Conner (ribs) has missed the past two games, and C Rodney Hudson (knee) and K Matt Prater (hip) have been sidelined for the past three games. Conner and Prater were limited in practice this week. Hudson, LG Max Garcia (shoulder) and LT D.J. Humphries (back) did not practice Wednesday or Thursday. ... The Vikings have only had one missed game by any of their starters this season, when S Harrison Smith was sidelined by a concussion in Week 3.

SERIES NOTES: The Vikings have won all 10 matchups in Minneapolis since the Cardinals moved to Arizona in 1988, including a divisional round playoff game after the 1998 season. ... Their last such loss was in 1977 to the St. Louis Cardinals at Metropolitan Stadium in Bloomington. ... Hopkins had four receptions for 54 yards and a TD last year against Minnesota. ... Vikings DE Danielle Hunter has eight sacks in four games against the Cardinals.

STATS AND STUFF: The Cardinals are coming off their highest-scoring game (42 points) in four seasons under coach Kliff Kingsbury. ... The Cardinals are 10-3 on the road over the past two years, including the playoffs, the best such record in the NFL. ... The Cardinals lead the league with four return TDs, including two interceptions for scores against the Saints. ... Cardinals RB Eno Benjamin had a career-best 113 total yards against New Orleans. ... QB Kirk Cousins has 38 wins with the Vikings, tied with Daunte Culpepper for the third most in franchise history. His streak of 36 straight games with at least one TD pass is the longest active run in the league and tied for the seventh longest in history. ... Vikings CB Patrick Peterson has 30 interceptions, the fourth most in the NFL since he entered with the Cardinals in 2011. Peterson had three passes defensed against Miami, his most in a game in three years. ... A win by the Vikings, who lead the NFC North by 2½ games, would give them their best seven-game start since they were 6-1 in 2009.

FANTASY TIP: Cardinals TE Zach Ertz has 29 catches for 328 yards and two TDs in five games against Minnesota, all while with the Eagles. The Vikings gave up six catches for 69 yards and two TDs to Dolphins TE Mike Gesicki in their previous game. They've allowed 24 receptions on 29 targets to the opponent's primary TE this season for 287 yards.