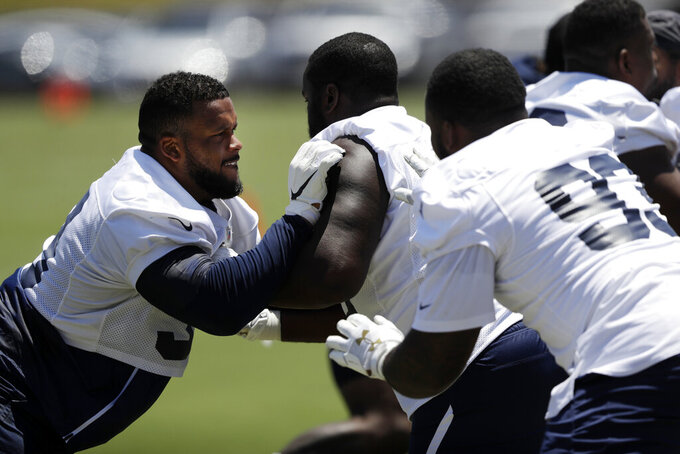 FILE - In this May 28, 2019, file photo, Los Angeles Rams defensive linemen, including Aaron Donald, left, go through drills during an NFL football training camp in Thousand Oaks, Calif. Donald is participating in his first training camp since 2016 after holding out for the past two summers in search of a new contract. (AP Photo/Marcio Jose Sanchez, File)

IRVINE, Calif. (AP) — When practice ends at UC Irvine and Aaron Donald is done chasing down the Los Angeles Rams' quarterbacks, he immediately starts after a high-energy 4-year-old with the same haircut as his All-Pro dad.

A.J. Donald and his 6-year-old sister, Jaeda, are getting their first chance to go to training camp with their father, who missed the Rams' past two camps while holding out in search of a massive new contract.

Aaron Donald finally got that six-year, $135 million extension with $87 million guaranteed last season, and he eagerly showed up to his first training camp since 2016 this month to pursue his third straight NFL Defensive Player of the Year award — and little A.J., too.

Donald said Jaeda "doesn't remember the last time she was at camp, and my son has never seen camp. So to have them being around and watching me play football, and them getting to run around the field, these are the types of memories that last forever."

The Rams have endured plenty of contract drama and high-stakes negotiations over the past few years, but everything is calm this summer. The defending NFC champions have no holdouts or drama in this camp, with the likes of Marcus Peters and Jared Goff eagerly showing up for work to earn their next deals instead of staying away.

"I feel that you just keep coming and you do what you need to do, and everything will get taken care of, man," said Peters, the two-time Pro Bowl cornerback starting the fifth year of his rookie contract. "We've got bigger goals, really. All that other stuff will take care of itself."

Donald's presence is the biggest difference for the Rams, and his impact is felt on both sides of the ball.

He serves as an example and a teaching resource for his teammates — particularly rookie nose tackle Greg Gaines, who is competing for the starting job to replace Ndamukong Suh.

Donald's relentless rushes also force the Rams' offensive line to be at its best. Joseph Noteboom and Brian Allen have been tapped for starting jobs after scarcely playing last season, and no challenge in the NFL is much bigger than Donald bearing down at full speed.

When Sean McVay was asked how he plans to monitor Donald's workload in his first training camp in three years, the head coach quipped: "Depends on how much he's wrecking practice. If he's really upsetting me by winning a lot, then he'll be standing next to me a lot."

McVay is grateful to have Donald and running back Todd Gurley, who will work out sparingly until the regular season begins in a bid to keep him fresh. Even if they don't take every practice snap — and Donald has been as busy as anyone on the field — their veteran presence boosts McVay's workouts.

"The biggest thing is just the way that (Donald) affects his teammates," McVay said. "Having him here, what that represents when he turns it up. You see why the production is what it is, and why he's the special player that he is."

Donald's absence from camp for the past two years clearly didn't affect him when the Rams finally reached the games that count, as his All-Pro selections and individual trophies attest.

Yet Donald hopes the early start to his season will translate into quicker starts overall. He had just one sack in the first three games during the past two seasons before going on to rack up spectacular totals, including an NFL-best 20½ sacks last season — a record for an interior lineman.

"Being here and getting myself in football shape and working my moves, hopefully it won't take me four games to get going this year," Donald said. "I think it's going to be a plus for me getting here, getting going right away. If anything, I should be better."

NOTES: Donald and most of the Rams' veterans sat out of practice Monday as part of McVay's schedule to keep his older players rested. Todd Gurley participated in workouts after sitting out Sunday, but the running back is likely to sit out Tuesday when the Rams wear full pads for the first time. ... With LT Andrew Whitworth sitting out, Noteboom moved from left guard to left tackle with the first-team offense, and Jamil Demby took Noteboom's regular spot at guard. ... The Rams have Wednesday off before the first of two joint practices with the Chargers on Thursday.