Adoree Jackson heading back to Tennessee as Giants No. 1 DB 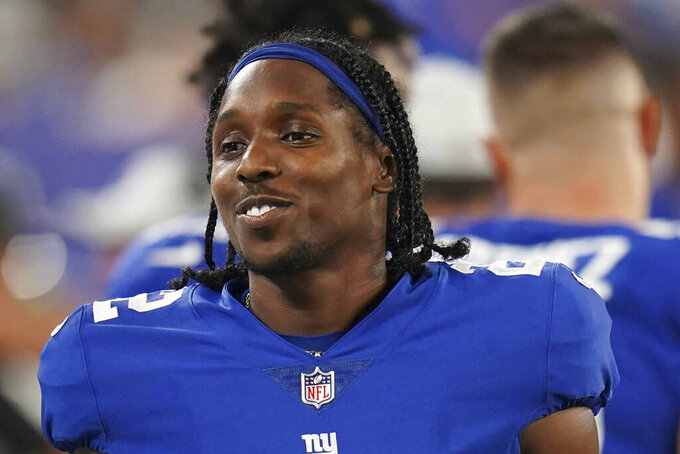 EAST RUTHERFORD, N.J. (AP) — Veteran cornerback Adoree Jackson isn't heading back to Tennessee with the New York Giants this weekend, looking to show the Titans they made a mistake releasing him in March 2021.

Jackson wants to get a win in the Giants first game under new coach Brian Daboll and he will have a major role in coordinator Wink Martindale's new defense. He has become the team's shutdown cornerback after an outstanding training camp.

Giants quarterback Daniel Jones was intercepted three or four times by Jackson in the camp, and he was impressed how Jackson stepped up and took over the top job in the secondary.

“He reads routes, concepts and kind of knows kind of what to expect," Jones said of Jackson Wednesday. "He studies us, he studies the other team, and he’s smart. I think all the best corners have that awareness and you can tell really study the game and understand all those little pieces.”

Jackson missed all but three games in his last season with Tennessee in 2020 with a knee injury, and last season he had only one interception in 13 games with the Giants. He missed four games late with a quad injury late.

The 26-year-old has made major strides since last season to become the Giants top cornerback. The job was wide open after New York released James Bradberry earlier this spring in a salary cap move.

“I feel like I had the most fun that I’ve had in a while,” Jackson said of camp and the preseason. “I'm just going back and playing football like I was playing Pop Warner. I will say it made me feel like a kid again being out there playing, running around with the guys. Just doing what I love to do.”

Jackson said his improved play has been the result of being healthy, working hard and understanding himself more after a couple of tough seasons. He has no beef with the Titans for letting him go and is looking forward to seeing former teammates such as safeties Kevin Byard and Amani Hooker and running back Derrick Henry on Sunday.

One of the guys he may face a lot on the field is wide receiver Robert Woods, traded to the Titans in the offseason. Both Woods and Jackson attended the same high school in California, and Jackson also faced Woods last year when New York played the Rams.

“That’s the organization that drafted me, so I’m forever thankful and grateful for the opportunity that they gave me,” Jackson said of the Titans. “At the end of the day, it just didn’t pan out the way they wanted, and I wanted. That’s how life goes. God gives you second chances to open another door when one closes and I’m here and I’m appreciative.”

Woods and Jackson also have trained together in the offseason for years.

“Very fun, that’s something that we train at ... going against each other, running routes, being able to do so in a game with our history is going to be fun,” Woods said. "And it’s going to be just a fun matchup, a quick player and myself as well.”

Jackson said besides Woods, the only current receivers he knows on the Titans are Cody Hollister and Nick Westbrook-Ikhine.

Jackson has played a lot of man to man in Martindale's defense, and he likes that.

“It puts you in a position to make plays and it’s all on you if you’re going to make them or not,” he said. “It gives you an opportunity and it’s about you capitalizing on them. So, I’m just thankful to be in the position.”

NOTES: Starting outside linebackers Azeez Ojulari (calf) and rookie Kayvon Thibodeaux (knee) were limited in practice Wednesday along with WR Sterling Shepard (Achilles). ... Rookie tight end Daniel Bellinger switched to No. 82 because he wanted a number in the 80s and he liked former Cowboys tight end Jason Witten. ... Second-year running back Gary Brightwell is listed as the team's kickoff returner in the depth chart.