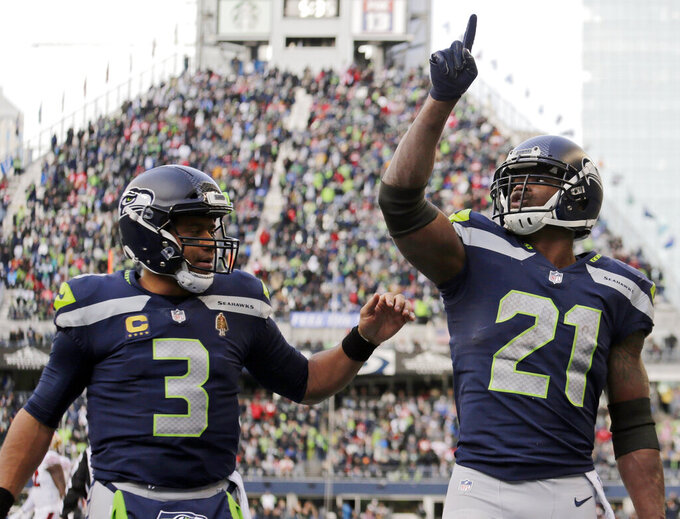 FILE - Seattle Seahawks running back Adrian Peterson (21) celebrates with quarterback Russell Wilson (3) after scoring a touchdown against the San Francisco 49ers during the first half of an NFL football game Dec. 5, 2021, in Seattle. With uncertainty surrounding the future of Wilson, Peterson believes finishing the season on a high note – Wilson threw nine touchdown passes and one interception in the final three games – will result in the quarterback staying put. (AP Photo/John Froschauer, File)

LOS ANGELES (AP) — The list of career accolades for Adrian Peterson is as impressive as any. The 15-year veteran is fifth in NFL history in rushing yards and the only non-quarterback to win NFL MVP since LaDainian Tomlinson in 2006.

But the 36-year-old running back says he is not quite ready to retire.

“I feel like I have the ability to continue to play, so I’m like why not continue to go for it?” Peterson said Friday on the AP Pro Football Podcast.

Peterson, the 2012 league MVP, split the 2021 season with the Tennessee Titans and Seattle Seahawks, playing in four games and totaling 98 yards and two touchdowns. The three-time NFL rushing leader told podcast host Rob Maaddi that he has made some new adjustments to his workout regimen, such as single-leg squats to take pressure off his back.

Peterson is just 82 yards shy of 15,000 for his career. His 120 career rushing touchdowns are tied with Jim Brown for 10th on the all-time list, a spot he said he doesn’t mind sharing — for the time being.

When asked what uniform he hoped to wear in 2022, Peterson shared his desire to return to Seattle with head coach Pete Carroll.

“Seattle would be lovely to go back there. It was a great experience for me,” Peterson said. “There is a lot of talent within that organization. (Carroll) is relatable; a players coach. But he is about his business, too. When you have that balance, guys respect that.”

With uncertainty surrounding the future of Seattle quarterback Russell Wilson, Peterson believes finishing the season on a high note – Wilson threw nine touchdown passes and one interception in the final three games – will result in the quarterback staying put.

“I would think that he is going to stay,” Peterson said. “There is a lot of talent within that organization. You see how we finished the season, it goes to show the talent in that building.”

Despite the talk about his future, Wilson doesn’t seem anxious to leave Seattle. When asked by Maaddi about his plans, the quarterback said he is taking it one day at a time.

“I love being in Seattle, it is a special place,” he said. “Pete (Carroll) and I are closer than ever. I love Pete; he is an amazing coach and an amazing person.”