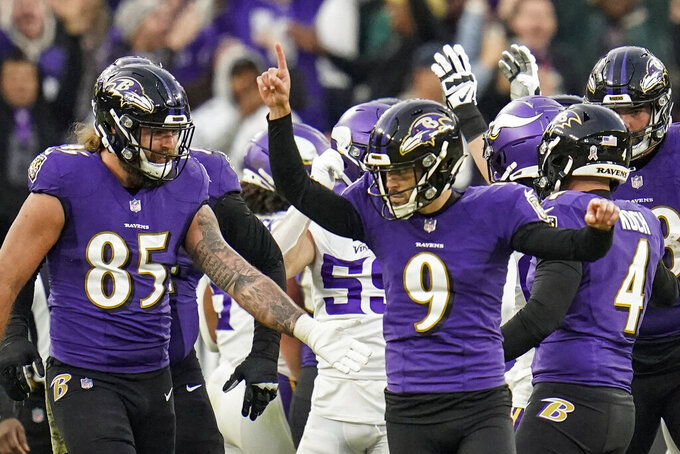 BALTIMORE (AP) — Lamar Jackson led an offensive resurgence in the second half, and Justin Tucker provided the winning points.

In many ways, Baltimore's overtime win over Minnesota mirrored the Ravens' season as a whole.

Baltimore was beset by injury problems before the season began, but the Ravens have persevered well enough that they lead the AFC North after eight games. Baltimore has rallied three times from double-digit deficits in the second half, including in Sunday's 34-31 victory.

When the Ravens (6-2) are in a tight spot, they still have Jackson, a quarterback who can make the offense look unstoppable for stretches. And they still have Tucker, a kicker they can count on.

“I don’t think we’re ever really out of a game, but you hate to be in those situations,” receiver Marquise Brown said. "You kind of want to start fast so you don’t have to do that. But if you’re in that situation in the game, I’m confident that we can get it done.”

Baltimore dropped its opener at Las Vegas, then rebounded with five consecutive victories. That streak ended when Cincinnati routed the Ravens 41-17, but the Bengals lost their next two games after that.

AFC contenders Buffalo, Cleveland and Kansas City have had problems of their own. Aside from Baltimore, the Tennessee Titans are the only team in the conference with just two losses — and they've lost star running back Derrick Henry.

The kicking game. Tucker's excellence may be taken for granted at this point, but it shouldn't be. The Baltimore star made a 36-yard field goal to beat Minnesota on Sunday, and while that was routine, there's little doubt the Ravens could have tried the kick from much farther if they'd needed to.

Tucker provided one of the NFL's most memorable highlights this season when he made a record-setting 66-yard kick to beat Detroit. Then a couple weeks later, the Ravens beat Indianapolis in overtime on a night the Colts missed an extra point and a potential game-winning field goal. Flip the results of just those two games, and the Ravens are a .500 team.

Tucker also kicked a 47-yard field goal in the season opener that gave Baltimore the lead with 37 seconds left, but the Ravens couldn't hold on and lost in overtime.

The Ravens have had issues defensively since the start. Derek Carr, Carson Wentz and Joe Burrow all passed for over 400 yards against Baltimore, and the Ravens have allowed at least 30 points in four of their eight games.

Pro Football Focus gives Baltimore the third-worst tackling grade in the league so far, and there have been issues in coverage as well. The Ravens improved as the game progressed against Minnesota, but that was after giving up a couple big plays early that put the team in a hole.

The passing game. Improving there went from a priority to a necessity after Baltimore's running back corps was decimated by injuries. Jackson has thrown for 2,209 yards, meaning he'd be on pace for his first 4,000-yard passing season even if there weren't an additional game on the schedule this year. He passed for 2,757 yards all of last season.

“He sees the field so well. He gives every play the maximum opportunity to be successful, if that makes sense," coach John Harbaugh said.

Jackson's presence alone is enough to keep the Ravens near the top of the rushing rankings, but running backs Latavius Murray, Devonta Freeman, Le'Veon Bell and Ty'Son Williams have combined to average 4.3 yards a carry. That's almost a full yard less than the trio of J.K. Dobbins, Gus Edwards and Mark Ingram averaged last season.

Season-ending injuries to Dobbins and Edwards have forced Baltimore to lean even more on Jackson, who is on pace for a career high in carries after rushing 21 times against the Vikings.

Harbaugh shot down a question about whether it's sustainable for Jackson to be running the ball that much.

“No long-term sustainability observations. It’s not even relevant," he said after Sunday's game. “Would you rather not run 21 times today and lose the game? It’s crazy to even suggest that.”

Baltimore lost Dobbins and Edwards before the season, and cornerback Marcus Peters went down then as well. Tackle Ronnie Stanley only played one game before going on injured reserve, and rookie receiver Rashod Bateman's debut was delayed because of groin problems. Now Bateman is back but receiver Sammy Watkins has been out. Murray has also been sidelined recently.

The injuries have been a constant problem this season, and yet the Ravens are in good shape in the standings. Harbaugh will likely receive coach of the year consideration if Baltimore keeps winning despite all of these obstacles.

The Ravens activated tight end Nick Boyle from injured reserve to the active roster Monday and designated guard Ben Cleveland for return to practice, but they also put safety DeShon Elliott on IR.

“It seems like we're always dealing with something,” defensive lineman Calais Campbell said.

427.9 — The number of yards of offense the Ravens are averaging per game. They may be inconsistent, but when this offense is rolling, it's very tough to stop. Only Dallas ranks ahead of Baltimore in total offense, and the Ravens are ahead of their average (407.6) in Jackson's MVP season of 2019.

The Ravens play at Miami on Thursday in their first road game since Oct. 3. Baltimore went 3-1 during its stretch of four straight home games. After facing the Dolphins, the Ravens play at Chicago.

Then comes a big seven-game stretch to close the season. That includes two games each against the Browns and Steelers, a rematch with Cincinnati and home games against the Packers and Rams.