After further (judicial) review: No do-over of Rams-Saints 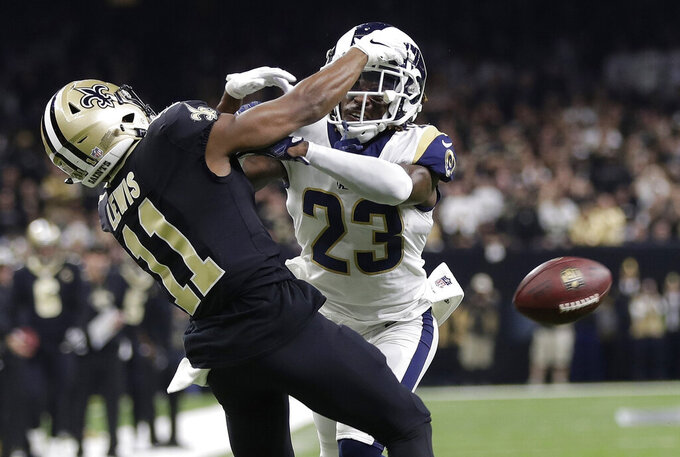 FILE - In this Jan. 20, 2019, file photo, Los Angeles Rams' Nickell Robey-Coleman breaks up a pass intended for New Orleans Saints' Tommylee Lewis during the second half of the NFL football NFC championship game in New Orleans. A quest by two New Orleans Saints ticketholders to force a full or partial do-over of this year’s NFC championship game because of a blown “no-call” by game officials was rejected Thursday, Jan. 31, 2019, by a federal judge.(AP Photo/Gerald Herbert, File)

NEW ORLEANS (AP) — A courtroom quest by two New Orleans Saints ticketholders for a full or partial do-over of this year's NFC championship game because of a blown "no-call" by game officials was rejected Thursday by a federal judge.

NFL officials have acknowledged that flags should have been thrown when a Rams defensive back leveled a Saints receiver with a helmet-to-helmet hit at a crucial point in the final minutes of regulation time. The Rams won the Jan. 20 conference championship in overtime and are set to play the New England Patriots in Sunday's Super Bowl in Atlanta.

Fan reaction in New Orleans has included disbelief, anger and resignation, expressed in newspaper headlines, billboards ("They reffed up" said one), promises by some restaurants and bars that they won't show the Super Bowl broadcast, and posters of blind referees.

And at least two lawsuits. One was a class-action lawsuit on behalf of ticketholders that was awaiting action in state court.

The other was filed by season ticketholders Tommy Badeaux and Candis Lambert two days after the game. It sought a court order called a writ of mandamus forcing the NFL to implement a rule allowing Commissioner Roger Goodell to investigate "extraordinarily unfair acts" that affect the game. Remedies under that rule include rescheduling the game in full, or from the point at which the unfair act occurred.

In a statement Thursday evening, Frank D'Amico, an attorney for Badeaux and Candis, gave no indication he would appeal U.S. District Judge Susie Morgan's ruling regarding the writ of mandamus. He said there remains an unresolved issue involving Saints season ticketholders' rights "to purchase tickets for the Super Bowl at face value to see the Saints play in that game." But he gave no details on his next move.

The NFL did not respond to an emailed request for comment.

"None of the actions Plaintiffs might seek to compel Commissioner Goodell to do are the kinds of actions a writ of mandamus may address," Morgan said in a 17-page ruling in which she detailed the extraordinary circumstances in which Louisiana law allows such an order to be issued.

In the same ruling, she also rejected arguments that the case should be heard in state court in New Orleans, where it was originally filed. She said the suit was, in effect, a class-action lawsuit seeking relief for all ticketholders and Saints fans, involving defendants outside of Louisiana and amounts of money that all make it appropriate for federal court.