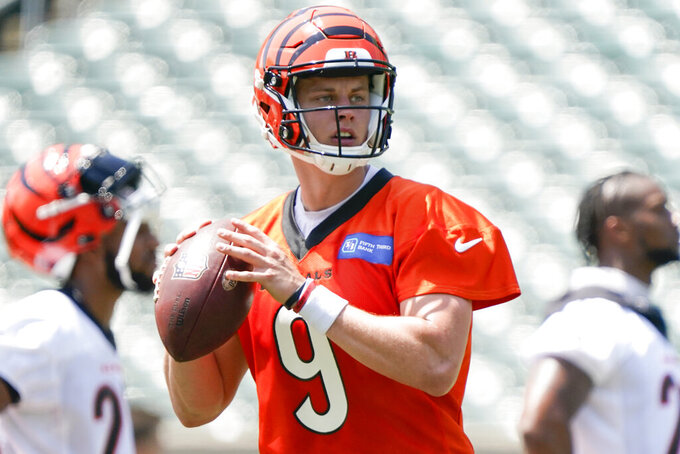 LAST YEAR: Coming off a 4-11-1 run in coach Zac Taylor's second season, expectations for the Bengals were tempered. Franchise quarterback Joe Burrow was still recovering from knee surgery when the season started and acknowledged that he wasn't entirely comfortable on it until around the halfway point. Cincinnati finished 10-7 in the regular season, good enough for the AFC North title as rookie receiver Ja'Marr Chase emerged as a star. Nail-biting wins over the Raiders, Titans and Chiefs put the Bengals in the Super Bowl for the first time in 33 years but they came up short, losing to the Los Angeles Rams 23-20.

CAMP NEEDS: Get key guys healthy. Cappa, expected to start at center, was limited in summer activities because of a core abdominal injury, but's expected to be good to go for training camp. Tee Higgins, who with Chase and Tyler Boyd make up one of the best set of wideouts in the NFL, is still rehabbing from shoulder surgery. The Bengals need some depth at the position, Last year's backups Stanley Morgan, Mike Thomas and Trent Taylor will get a look, and rookie Kwamie Lassiter II stood out in organized team workouts.

KEY CAMP COMPETITIONS: While most of the retooled offensive line seems set, there will be competition at left guard. Jackson Carman seems to be the front-runner — he lost his starting job midway through last season — and D’Ante Smith and rookie Cordell Volson are in that mix. The Bengals are looking for rookie Hill to emerge as a key contributor at cornerback and maybe push Eli Apple for a starting job.

EXPECTATIONS: Off the charts. The Bengals love Burrow's toughness, confidence and steely eyed leadership, which lifts the entire team. A retooled offensive line should keep the third-year quarterback on his feet more often and open up lanes for RB Joe Mixon, who has distinguished himself despite being limited by bad blocking in recent years. Questions about the future of safety and team leader Jessie Bates could be a distraction. The Bengals placed the franchise tag on him for this season, and the fifth-year pro is frustrated by not being able to reach an agreement with the team on a long-term contract.