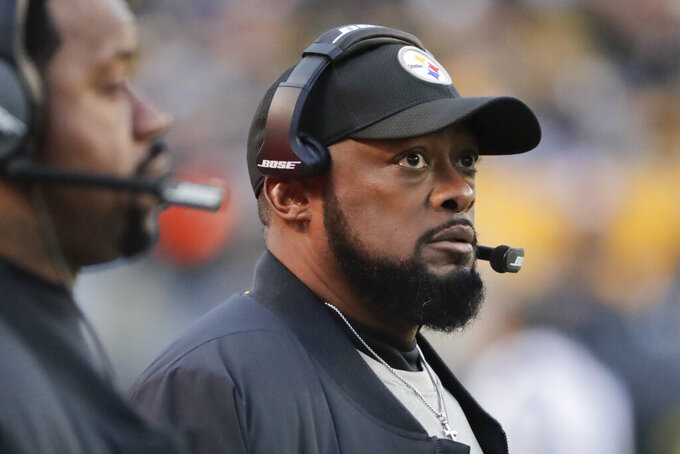 File- This Dec. 30, 2018, file photo shows, Pittsburgh Steelers head coach Mike Tomlin during an NFL football game against the Cincinnati Bengals, in Pittsburgh. With only a handful of minorities in the stepping-stone positions of offensive coordinator and quarterbacks coach, the NFL saw its sharpest-ever one-year drop in minority head coaches, causing concern among advocates for diversity declaring unsatisfactory progress 16 years after the Rooney Rule was implemented. (AP Photo/Gene J. Puskar, File)

After all the points were piled up in the second-highest scoring season in NFL history, the popular prototype for a head coach became predictably clear.

Teams on the annual coaching carousel this winter searched for their own version of prodigy Sean McVay, the creative play caller and quarterback whisperer who took the Los Angeles Rams to the Super Bowl in his second season at the helm.

An Associated Press study of coaching staffs for the 2018 season found only four minorities in the stepping-stone positions of offensive coordinator and quarterbacks coach, just 7.1 percent of 56 jobs. That lack of minority coaches in the pipeline helped contribute to the NFL's sharpest-ever one-year drop in minority head coaches, causing concern among advocates for diversity, who declared there has been unsatisfactory progress 16 years after the Rooney Rule was implemented.

The rule named after late Pittsburgh owner Dan Rooney was put in place before the 2003 hiring season and now requires all teams to interview at least one minority candidate for any head coach or general manager vacancy. But the AP study found that nearly three-quarters of all minority assistants were either running backs, receivers, defensive backs coaches, or in lower-level positions like quality control coaches — jobs that historically have not directly led to head coaching opportunities.

So when five black head coaches were fired this past season — Todd Bowles (Jets), Hue Jackson (Cleveland), Vance Joseph (Denver), Marvin Lewis (Cincinnati) and Steve Wilks (Arizona) — only one of the eight overall openings went to a minority with New England defensive assistant Brian Flores set to be hired by Miami after the Super Bowl.

To be fair, none of the firing or hiring decisions made this offseason was viewed in a vacuum as unjust. Since the start of the 2016 season, Bowles, Jackson, Joseph, Lewis and Wilks combined for a record of 50-132-2, a woeful winning percentage of .277. Collectively, however, this development has prompted diversity advocates to call on the NFL to consider changes that could help ensure this is a blip rather than a trend.

"Dan's proposal was to slow things down and see what coaches you want and try to come up with a minority candidate or candidates that fit that criteria, and people are not doing that now," said Hall of Fame member Tony Dungy, who was one of two minority head coaches in the NFL when the Rooney Rule was enacted in December 2002.

The success of McVay, who was hired at age 30 by the Los Angeles Rams and turned a four-win team into a Super Bowl participant in just two seasons, might have accidentally had some effect.

McVay's 35-year-old quarterbacks coach Zac Taylor is expected be the next head coach in Cincinnati despite only five games of experience as an interim offensive coordinator in the NFL.

Matt LaFleur, 39, replaced Mike McCarthy as head coach in Green Bay with just two years of offensive coordinator experience on his resume. Kliff Kingsbury got the top job in Arizona shortly after being fired as a college head coach at Texas Tech.

"I think it is cyclical," Dungy said. "I also think a lot of owners don't know or understand what goes into being a successful head coach. If I coach my quarterback really well I will have a good team, of course, and they feel the guy who coaches the quarterback really will be a successful head coach, but we have seen that's not necessarily the case. For every Doug Pederson or Sean McVay, who are great, we see (many) who don't work out."

The hunt for the next McVay is similar to what happened starting more than a decade ago when coaches with ties to Dungy and his Tampa 2 defensive system were the hot commodities. Four of Dungy's former defensive assistants — all minorities — went on to get head coaching jobs: Tomlin, Herm Edwards, Lovie Smith and Leslie Frazier.

Raheem Morris also got a head coaching job after joining the staff with Tampa Bay after Dungy was fired, and Dungy's former offensive coordinator in Indianapolis, Jim Caldwell, got head coaching opportunities with the Colts and Detroit Lions.

After a season in which the four conference finalists were the four highest-scoring teams in the league, the emphasis is firmly on offense.

"Ratings are up. Points scored are higher. People love offense. The rules have gone to offense. So there's a bias toward offensive head coaches right now," Carolina Panthers owner David Tepper said, while praising the NFL's efforts to enhance ground-level opportunity and aim for more minorities in the paths that typically lead to head coach positions.

Of the 20 offensive head coaches in the league, 16 served as offensive coordinators before getting hired and 17 spent time as quarterbacks coaches or played the position in college or the pros. That is a path that only a handful of minorities are on.

"I think teams are looking too much at the play callers versus a guy that can be the CEO of an organization, a face of the organization, a guy that can lead a football team and get the most out of his players," said Lynn, who spent 14 seasons as a running backs coach before serving as an interim offensive coordinator for Buffalo the year before getting hired by the Chargers. "That has nothing to do with play calling. That has everything to do with a man's character and leadership and guys willing to follow him. You have some excellent play callers that we've proven over and over again that can't be a head coach in this league. We've proven that. It's just a change of thinking in the hiring process."

An AP review of all of the coaching staffs in the league at the start of the 2018 season, excluding administrative assistants, data analysts and strength and conditioning coaches for the purpose of streamlining the count, found that 34.8 percent of the coaches were minorities, 216 of 621.

"If you're really, really committed to giving minorities opportunities, then you must build a pipeline. To build a pipeline you need to bring in minority coaches at the quarterbacks and quality control spots," said John Wooten, executive director of the Fritz Pollard Alliance, an organization that works to foster racial diversity in the NFL. "There are so few quarterback coaches and coordinators at the college level. Consequently, because of that lack, you don't have the area to build from, so you have to go build it yourself. That's what plans we have, to do it that way."

Wooten plans to meet with NFL officials at the upcoming scouting combine to discuss getting teams to commit to hiring more minorities for entry-level jobs that can eventually lead to coordinator or head coaching opportunities.

The league announced in December what it said were stronger provisions for the Rooney Rule . Among several changes, clubs now must interview at least one candidate of diversity from a list compiled by an advisory panel, or a candidate not currently employed by the team. The league is also requiring teams to keep records and provide them when asked by the commissioner.

"We believe more can be done to support the Rooney Rule in the interest of creating an inclusive opportunity platform with the intent that consideration, inclusion and consistency will become rooted in hiring practices," NFL football operations chief Troy Vincent said.

Wooten and others, however, stopped short of endorsing an explicit extension of the Rooney Rule to coordinator jobs, preferring to maintain an atmosphere of autonomy for head coaches in selecting their staffs.

For Lynn, too, there's perspective about the tenuous nature of the profession amid the push for more opportunity.

"I just think it's one of those years. Some guys got let go. It happens every year. I like to look at it as just coaches. I don't like to look at it as black and white coaches," Lynn said last week at the Pro Bowl. "I think we've got to get some good minority coaches coming up through the pipes, and I think there are some really good ones. They need some more opportunities."