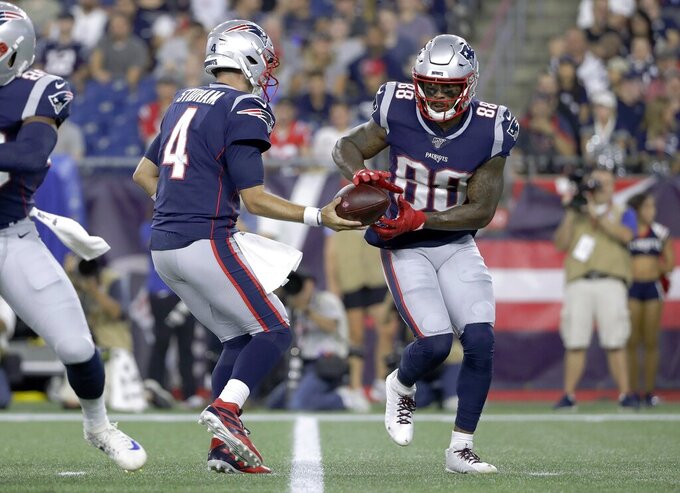 FILE - In this Thursday, Aug. 29, 2019 file photo, New England Patriots quarterback Jarrett Stidham, left, hands off to wide receiver Demaryius Thomas (88) in the first half of an NFL preseason football game in Foxborough, Mass. A person with direct knowledge of the deal says the New York Jets have acquired wide receiver Demaryius Thomas from the New England Patriots for a 2021 sixth-round draft pick. The person spoke to The Associated Press on condition of anonymity Tuesday, Sept. 10, 2019 because the teams had not yet announced the trade. (AP Photo/Steven Senne, File)

NEW YORK (AP) — The New York Jets are getting some roster help from the most unlikely of sources: Bill Belichick and the New England Patriots.

Adam Gase's squad acquired wide receiver Demaryius Thomas from the Patriots for a 2021 sixth-round draft pick on Tuesday, according to a person with direct knowledge of the deal.

The person spoke to The Associated Press on condition of anonymity because the teams had not yet announced the trade.

Thomas became expendable for the Patriots when they signed Antonio Brown over the weekend.

The 31-year-old Thomas gives the Jets' receiving group an immediate boost, joining Robby Anderson, Quincy Enunwa and Jamison Crowder. The move also comes a day after Gase made it clear he wasn't pleased with the receivers' overall performance in a 17-16 season-opening loss to Buffalo.

Crowder had 14 catches for 99 yards as Sam Darnold used him often for short-yardage plays, but Anderson (three catches for 23 yards) and Enunwa (one for minus-4) combined for just four receptions.

Thomas and Gase were together in Denver from 2010-14, when Gase was the wide receivers coach and later the Broncos' offensive coordinator. Thomas was also part of the Broncos' Super Bowl-winning team with Peyton Manning in February 2016.

Thomas has 688 receptions for 9,330 yards and 62 touchdowns. He played for the Broncos from 2010 until being traded to Houston last October for a seventh-round draft pick. He tore his Achilles late last season, was released by the Texans in February and signed with the Patriots in April.

Thomas also faced some legal issues in the offseason when he pleaded guilty in March to careless driving in a February crash in downtown Denver. As part of the plea deal, Thomas' attorneys said prosecutors dismissed a felony vehicular assault charge. Thomas was fined $300, ordered to complete 50 hours of community service and was placed on supervised probation for one year.

The receiver spent most of the summer on New England's physically unable to perform list while continuing to recover from his Achilles injury. Thomas was activated on Aug. 20 and had seven catches for 87 yards and two touchdowns in the preseason finale against the Giants.

But, he was inactive for the Patriots' first regular-season game of the season Sunday night against Pittsburgh with a hamstring issue. His role with New England was also uncertain because of Brown's arrival.

The move capped a busy day for the Jets, who also signed kicker Sam Ficken and waived Kaare Vedvik. The NFL also announced that second-year defensive lineman Nathan Shepherd was suspended six games for violating the league's policy on performance-enhancers.