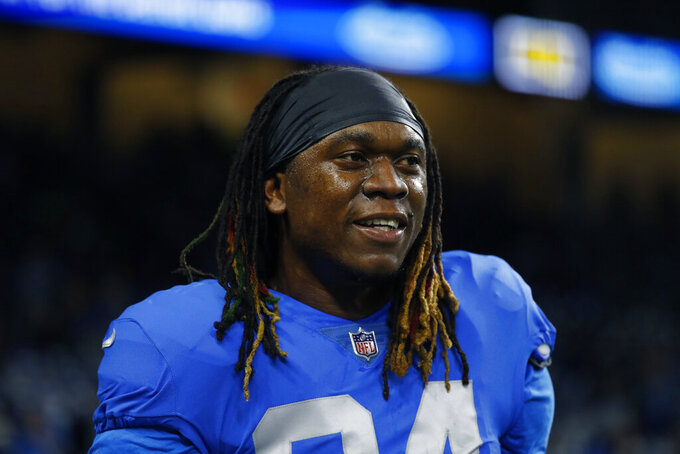 FILE - In this Thursday, Nov. 22, 2018, file photo, Detroit Lions defensive end Ezekiel Ansah stands during pregame of an NFL football game against the Chicago Bears, in Detroit. The Seattle Seahawks are addressing one of their biggest offseason needs as veteran defensive end Ansah has agreed to a one-year deal with the team, according to a person with knowledge of the deal, Wednesday, May 8, 2019. (AP Photo/Paul Sancya, File)

RENTON, Wash. (AP) — The Seattle Seahawks are addressing one of their biggest offseason needs as veteran defensive end Ezekiel Ansah has agreed to a one-year deal with the team, according to a person with knowledge of the deal.

The person spoke to The Associated Press on Wednesday night on the condition of anonymity because the deal had not been announced by the team. NFL Network first reported the agreement.

Ansah will join the Seahawks after six seasons with Detroit and may not be the final move made by Seattle in an attempt to bolster its pass rush with sacks leader Frank Clark traded to Kansas City before the draft last month.

Two years ago, Ansah had 12 sacks and in 2015 had 14 ½ when he was voted to the Pro Bowl for the only time in his career. But his health will be a major concern with Ansah's arrival in Seattle after he played in just seven games last season for Detroit due to shoulder problems that lingered the entire season.

Seattle waited until after Tuesday's deadline when free agent signings would count against compensatory picks in next year's draft before reaching an agreement with Ansah. Seattle coach Pete Carroll made it clear during the NFL draft there were additional moves to come to help the pass rush.

"There is work that we're engaged in (during) this stage of filling up the roster and we're very involved in what is coming up next," Carroll said on April 27. "We're not done, we have work to do. We're excited about what's coming up and you guys will see in time."

Ansah played last season on the franchise tag with the Lions and earned $17.1 million for a season that ended on injured reserve.

Seattle's decision to trade Clark before the draft ended up landing the Seahawks a bounty of needed picks in the draft and freed up more than $17 million in salary cap space, but also saw 13 sacks leave town from the one proven edge pass rusher on their roster. Jarran Reed had 10 ½ sacks from his defensive tackle position last season, but no other Seattle defensive lineman had more than three sacks.

If he is healthy, Ansah will be an immediate boost. Seattle drafted L.J. Collier in the first round to play defensive end, but he was the only one of Seattle's 11 draft picks used to address the pass rush. With the addition of Ansah and Collier, the Seahawks pass rush options now include Quinton Jefferson, Brandon Jackson and Jacob Martin.