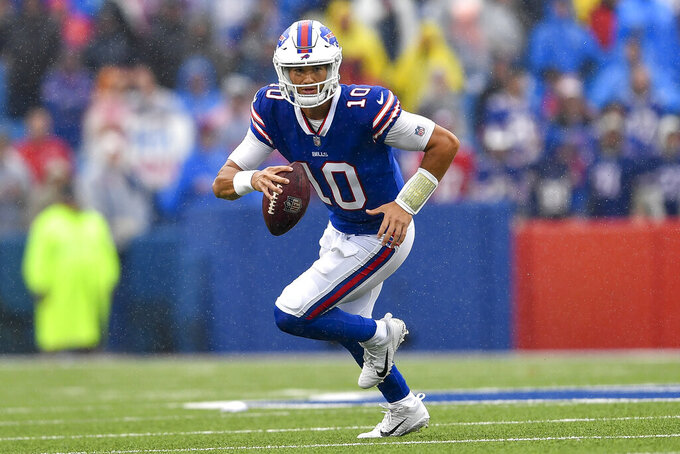 PITTSBURGH (AP) — Mitchell Trubisky will get a chance to kickstart his career in Pittsburgh, and attempt to replace a likely Hall of Famer in the process.

A person with knowledge of the deal tells The Associated Press that the veteran quarterback and the Pittsburgh Steelers have agreed to terms on a two-year contract that will give Trubisky a chance to compete for the open starting job following Ben Roethlisberger's retirement in January.

The person spoke to the AP on the condition of anonymity because the deal was not yet official.

The agreement was first reported by NFL Network.

Trubisky, 27, joins the Steelers after spending 2021 backing up Josh Allen in Buffalo following a flame-out in Chicago. The second overall pick in the 2017 draft spent four uneven seasons with the Bears, going 29-21 as a starter while passing for 10,652 yards with 64 touchdowns and 38 interceptions.

The move is among the first of what will likely be a busy offseason for Pittsburgh, which is looking to fill holes at several positions following a 9-7-1 season that ended with a blowout loss to Kansas City in the first round of the playoffs.

The Steelers entered free agency with nearly $29 million in cap room, a significant chunk for a franchise that typically has little to spend on the open market. That figure could grow before the start of the new league year on Wednesday if Pittsburgh parts with linebacker Joe Schobert, among others.

Landing Trubisky provides some competition at the sport's most vital position before the Steelers go searching for help along the offensive and defensive lines, and potentially in the secondary. Trubisky's arrival also could impact the team's interest in using its first-round draft pick on a quarterback, especially with a talent deficit in the trenches.

Trubisky spent four turbulent seasons in Chicago, which traded with San Francisco to move up one spot in the first round of the 2017 draft. Though there were flashes early — he was a Pro Bowler in 2018 after throwing for 3,223 yards and 24 touchdowns while leading the Bears to the playoffs — he was unable to sustain it.

Chicago declined to pick up Trubisky's fifth-year option before the 2020 season and he was released last March. The Bills acted quickly to bring him in to work behind Allen.

While Rudolph will likely be atop the depth chart, Trubisky offers the kind of mobility Rudolph lacks. Steelers coach Mike Tomlin talked repeatedly during the season about the need to have a quarterback who can move around in offensive coordinator Matt Canada's attack, something nonexistent in Pittsburgh for the second half of Roethlisberger's career.

Trubisky will compete to play behind an offensive line that will include tackle Chuks Okorafor, who signed a three-year contract to stay in Pittsburgh on Monday.

Okorafor started 16 games last season after moving over to right tackle in place of Zach Banner, who hit a snag in his recovery from a torn ACL during training camp and played five snaps all season.

NOTES: The Steelers re-signed CB Arthur Maulet to a two-year deal on Monday. Maulet, who was set to be a free agent, played in 16 games in 2021, making 46 tackles.