AP WAS THERE: Cowboys get 9 takeaways in 42-17 rout of Bills 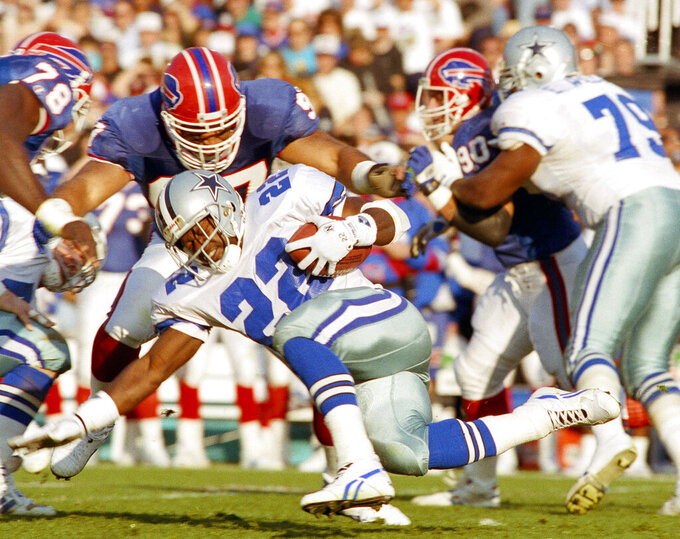 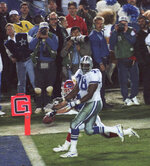 PASADENA, Calif. (AP) — Troy Aikman, Michael Irvin and Emmitt Smith were the young stars of Dallas' up-and-coming team that seemed to have reached the Super Bowl a year or more ahead of schedule. They were going up against the seasoned Buffalo Bills who had come up short against the Giants and Washington in the previous two Super Bowls. But it was Dallas with the youngest and fastest team in football that would roll to a 52-17 victory behind a whopping nine takeaways. It was the start of Dallas' drama-filled dynasty that would include another win over Buffalo a year later. The Associated Press is republishing verbatim the story of that game.

It was quicker than anyone could imagine.

Three seasons ago, the Dallas Cowboys were the worst team in NFL history. Now they’re Super Bowl champions and they did it with four of the quickest touchdowns ever.

That left the Buffalo Bills as the first team to lose three straight Super Bowls and the NFC’s supremacy intact — nine straight NFL titles, seven in overwhelming fashion, this time 52-17.

“Our defense is somebody now,” Norton said of a unit that had no Pro Bowlers to six for Dallas’ offense. “Everybody knows who we are.”

Along with Aikman, the defense was the factor against Buffalo, just the second team to make it the Super Bowl three straight times.

“You always wonder why, why us?” said Buffalo quarterback Jim Kelly, who was knocked out of the game with 6:52 remaining in the first half when he re-sprained his right knee. “We turned the ball over nine times and you can’t beat a college team doing that.”

Two of Aikman’s TD passes went to Michael Irvin and one each to Jay Novacek and Alvin Harper as the NFC East won the Super Bowl for the third straight year, a record. The three winners were different — Dallas, Washington and the New York Giants — but the victim each time was the Bills.

“Early on, the whole team was a little uptight,” said Aikman, who was 22 of 30 for 273 yards. “I really had to talk myself into staying relaxed out there. This is the greatest feeling that I’ve ever had in my life and I wish every player could feel it.”

There was another first: Jimmy Johnson became the first coach ever to win both a national college title and a Super Bowl. The NFL title came just three years after he began his pro coaching career with a 1-15 record.

It was the Cowboys’ third Super Bowl victory, but their first in 15 years, and Johnson got his just reward — a dousing by his players at the two-minute warning that left his hair-sprayed coiffure uncharacteristically mussed.

“Nine turnovers in the game and they converted five into TD scores,” said Buffalo coach Marv Levy. “We picked the wrong day to play poorly.”

The Cowboys won on both sides of the ball. Emmitt Smith, the NFL’s leading rusher, ran for 108 yards on 22 carries and became the first rushing leader to win a Super Bowl. He was the first to ever play in it.

After spotting the Bills an early 7-0 lead on a TD set up by a blocked punt, the Cowboys turned on the defense, getting five of the turnovers in the first half.

James Washington’s interception of Kelly set up a 23-yard TD pass to Novacek. Fifteen seconds later, Haley knocked the ball loose from Kelly at the goal line to defensive tackle Jimmie Jones, who took two steps into the end zone for the score that put the Cowboys ahead for good.

“I was reading and reacting just like I was supposed to,” Jones said. “All of a sudden Charles hit Kelly and the ball fell right in my hands. I couldn’t believe it. I hadn’t even scored a touchdown in high school.”

Then Norton and Vinson Smith sparked a goal-line stand that stopped the Bills on three shots inside the Dallas 1 - the last on a fourth-down pass from the 6-inch line. Dallas defensive coordinator Dave Wannstedt, whose prowess helped earn him the head coaching job in Chicago next season, had a nickel defense in on the play and Thomas Everett intercepted Kelly’s desperation pass in the end zone.

“I wish we had run it in,” Kelly said. “We’d run that play in practice and it worked.”

Everett had a second interception in the fourth quarter that set up a 10-yard TD run by Smith. Then Norton scored, taking in a fumble from 9 yards out after it bounced into his arms following a high snap.

That first interception was typical for Buffalo. With and without Kelly it couldn’t produce when it had to.

Frank Reich, who engineered the biggest comeback in NFL history when he brought the Bills back from a 35-3 third-quarter deficit in the wild-card game with Houston, had no such miracles in him this day, although he did throw a 40-yard TD pass to Don Beebe on the final play of the third quarter.

On his first series, Reich drove Buffalo from his 33 to the Dallas 3. But Haley stuffed Thurman Thomas on a third-and-1 from the 3-yard line, forcing a 21-yard field goal by Steve Christie that cut the deficit to 14-10 with 3:24 left in the half.

It was the last gasp for the Bills.

First Aikman drove the Cowboys 77 yards in five plays, hitting Irvin for a 19-yard TD on his favorite slant across the middle.

After the kickoff, Leon Lett stripped Thomas on the first play from scrimmage and Jones recovered on the 18.

And then Aikman found Irvin at the 2 and he stepped around Nate Odomes for the score. It came 18 seconds after the previous TD and sent the Cowboys off with a 28-10 halftime lead, all but ending the game.

“Those two TDs were the turning point,” Levy said.

Johnson made sure that his team didn’t sit on the 28-10 halftime lead, reminding them about the Bills’ comeback against Houston.

Lin Elliott’s 20-yard field goal on the first series of the second half made it 31-10. Then, after the Reich-Beebe hookup had made it 31-17 and aroused the Buffalo fans - a minority in the crowd of 98,374 — Aikman put them out of their misery by hitting a wide-open Harper from 45 yards with 10 minutes left in the game.

Then Norton made it 52-17, the third-biggest margin in Super Bowl history. It might have been more. But Lett, racing toward the end zone with a fumble with 4:42 left in the game, had the ball knocked from his hands by Beebe as he tried to jog in, holding the ball knee-high in his right hand.

“I thought I was there,” Lett said, adding that Johnson told him: “Don’t celebrate until you score.”

At the beginning, it was the Cowboys, the NFL’s youngest team with an average age of 26, who looked like they might self-destruct with three costly early penalties.

The Buffalo defense and special teams set up the first score - along with a critical Dallas penalty.

After the Bills got one first down on their opening series, Chris Mohr’s 50-yard punt set the Cowboys back to the 15. Then Marvcus Patton and Darryl Talley stuffed Smith on the first two downs and Aikman overthrew Irvin on the third.

That set it up for Steve Tasker, who burst up the middle and got an arm on Mike Saxon’s punt, which squibbed out of bounds at the 16. It was the first punt the Cowboys had blocked since Dec. 16, 1989, 220 punts and 53 games ago.

Then a holding call by Larry Brown negated a third-down sack by Haley, and two plays later, Thomas capitalized, scooting into the end zone from 2 yards.

Dallas’ next series was cut short after a 12-yard run by Smith was negated by an illegal procedure call.

A third penalty, roughing Kelly called against Lett, prolonged another Buffalo series. But two plays later, Kenneth Gant blitzed and forced Kelly to throw off balance, a pass that Washington picked off and returned 13 yards to the Buffalo 47.

It was the turnover that led to the great turnaround.

It took Dallas six plays to score - when the Cowboys picked up a Buffalo blitz and Aikman found Novacek over cornerback James Williams from 23 yards to tie it 7-7 with 1:36 left in the half.

Buffalo came right back, Kelly hitting Andre Reed for 40 yards to the Dallas 4-yard-line. On first down, Carwell Gardner, slashed to the 1.

But then Thomas was stopped by Vinson Smith and Norton stood up Kenneth Davis on third down. On fourth down, came a strange call - with a foot to go, the Bills spread their formation and Kelly rolled right. But the Cowboys were ready and Everett picked off the ball in the end zone.

Kelly went out when he was hit by Norton and Reich immediately moved the Bills into scoring position by hitting Reed for 38. But on a third and less than one at the 3-yard-line, Haley slashed through and dropped Thomas a half-yard behind the scrimmage line, forcing the Bills to settle for Christie’s 21-yard field goal.

But the 14-10 deficit lasted less than two minutes as Dallas went 72 yards in five quick plays, twice beating Buffalo blitzes. Smith’s 39-yard run put the ball on the Buffalo 19, then Aikman drilled the ball to Irvin on the receiver’s favorite slant play for the score with 1:54 left in the half.

“I thought it would be a tough ballgame,” Smith said. “But things just started working out for us.”

For NFC teams, it almost always does.