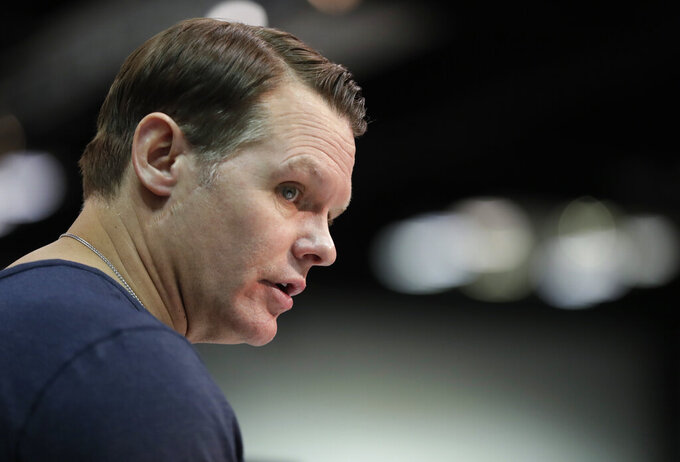 He hopes the payoff is worth it.

After watching the Colts improve from No. 30 in total defense in 2018 to No. 11 last season, Ballard used seven of his first eight picks adding assets for second-year defensive coordinator Matt Eberflus.

"I guess now you understand what the plan was. Speed, competition on defense, plain and simple," Ballard said. "We wanted to get athletic, fast players who fit our mold, which I think we accomplished."

Ballard did what he could to ensure the progression continues.

Now, just months after Andrew Luck led the Colts back to the playoffs and was the overwhelming choice as the NFL's Comeback Player of the Year, Ballard invested heavily on the other side of the ball.

"I feel a little defensive today," team owner Jim Irsay joked as he entered the Colts' media room. "We really thought those four picks we had on Friday were really, really game-changers for us to make us a better football team."

He didn't just dip his toe into a deep pool of talented defenders — he dove in head first looking for players who could primarily pressure quarterbacks or hold up in pass coverage.

Indy needed to get better in both areas, and Ballard did everything in his power to make it happen. Three times, he swapped picks. He also traded veteran defensive tackle Hassan Ridgeway to Philadelphia for an extra seventh-round choice, No. 246 overall.

But if those experiments fail, Ballard figures the fallback options aren't much of a gamble.

The defensive run began with cornerback Rock Ya-Sin early in the second round and didn't stop until late in the final round of the draft Saturday. Along the way, the Colts selected three linebackers — Banogu, Bobby Okereke of Stanford, and E.J. Speed of Tarleton State — two safeties — Khari Willis of Michigan State and Tell — and defensive end Gerri Green of Mississippi State. The Colts took speedy receiver Parris Campbell late with their second-round pick and closed the draft by using seventh-round selections on tackle Jackson Barton of Utah and center Javon Patterson of Mississippi.

Colts fans were disappointed when Ballard sent the No. 26 overall pick to Washington for two second-rounders. But the selection of Speed, who played at the Division II level, created the most intrigue. Speed was not a familiar name to most fans because he was not invited to the NFL scouting combine, didn't play in any college all-star games and said he turned down chances to play at more Big 12 schools so he could be near his adopted brother, who was battling cancer.

Ballard prefers substance to splash — and this was another draft that reflected his philosophy. Indy thinks Ya-Sin can be a lockdown cornerback, and Ballard filled his most glaring hole on the depth chart by choosing all those linebackers. He also found some depth for the offensive line and, perhaps most important, gave coach Frank Reich a dangerous deep threat who can create mismatches in multiple spots on the offense.

This weekend is only the start for Indianapolis, and Ballard knows it. Over the past two seasons, he's plucked key contributors off the waiver wire (starting cornerback Pierre Desir and right guard Mark Glowinski), from other teams' practice squads (center-guard Evan Boehm), and even off the street (safety Mike Mitchell). Plus, the Colts have had at least one undrafted rookie make the roster out of training camp for 20 consecutive seasons — the longest active streak in the league. The first component came Saturday when Ballard announced Indy would pick up the fifth-year option on starting center Ryan Kelly. So expect Ballard to stay busy between now and the Sept. 8 season opener at the Los Angeles Chargers.