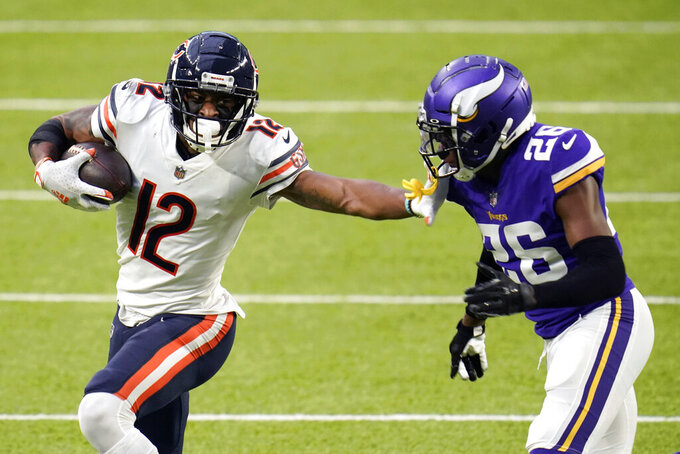 FILE - In this Dec. 20, 2020, file photo, Chicago Bears wide receiver Allen Robinson II (12) runs from Minnesota Vikings cornerback Chris Jones (26) after catching a pass during the second half of an NFL football game in Minneapolis. Robinson insisted a contract negotiation that left him playing this season on the franchise tag rather than a multiyear deal did not give him a chip on his shoulder or an extra desire to show his worth. (AP Photo/Jim Mone, File)

LAKE FOREST, Ill. (AP) — Allen Robinson had all the motivation he needed anyway.

The Chicago Bears' star receiver insisted a contract negotiation that left him playing this season on the franchise tag rather than a multiyear deal didn't give him a chip on his shoulder or an extra desire to show his worth.

“It's not about proving (anybody) wrong,” he said Monday. “I’m going out there this year to be the best player I can be. That’s my main focus, and I’m not focusing on proving anybody wrong, proving anybody whatever. It’s just about me going out there and getting better, improving from my years prior and continuing to ascend as a player in this league.”

Robinson is in a good spot coming off one of his best seasons as a pro. He caught a career-high 102 passes. His 1,250 yards were second only to the 1,400 he had in his 2015 Pro Bowl season with Jacksonville.

If he winds up staying in Chicago for the long term and continuing to produce at this rate, he figures to become the franchise's all-time leading receiver. The top spot belongs to Johnny Morris with 5,059 yards from 1958-67.

The 28-year-old Robinson has 3,151 yards in three seasons since he left Jacksonville for a three-year, $42 million contract with Chicago in 2018. And though he didn't get the deal he wanted this time, he's not ruling out staying long enough to move to the top of the Bears' all-time list.

“That’s something that’s definitely still in play," Robinson said. "Like I said this offseason, those things like that are still in play. Obviously, it would take big years and stuff like that. But again, those things like that are still on the horizon. At the end of the day, I’m not really focused on tomorrow, the next day, the next year or anything like that. It’s about how can I get better each and every day. What I can bring to this team each and every day. And how can I help us get better as an offense and help us win games.”

The Bears certainly have room to improve after going 8-8 in the regular season for the second straight year. Though they made the playoffs for the second time since 2018, they did it as the seventh seed in an expanded field and bowed out with a convincing wild-card loss at New Orleans.

Robinson was the most consistent playmaker on an offense that ranked in the middle of the pack. The Bears made some big changes, most notably signing veteran quarterback Andy Dalton and trading up to draft former Ohio State star Justin Fields with the No. 11 overall pick.

They also added some speedy receivers such as Damiere Byrd and Breshad Perriman as well as Marquise Goodwin, a track and field standout who was a two-time national champion in the long jump at Texas and made the 2012 U.S. Olympic team. The Bears hope they can stretch the field and maybe take some of the load off Robinson.

NOTES: Coach Matt Nagy said he feels “pretty good right now” about veteran LT Jason Peters' conditioning and the plan is to have him play the entire game Sunday. The Bears signed the 39-year-old Peters, a two-time All-Pro, in mid-August to solidify the position with second-round draft pick Teven Jenkins missing the start of the season following back surgery. ... The Bears finalized a contract with Perriman after GM Ryan Pace confirmed last week a deal was in the works. Perriman had 30 receptions for 505 yards and three touchdowns with the New York Jets last season, his fifth in the NFL. He agreed to a one-year, $3 million contract with Detroit in March and was released by the Lions for a lack of production in the preseason. ... Though he didn't have the exact number, Nagy said he thinks more than 90% of the team is vaccinated against COVID-19.