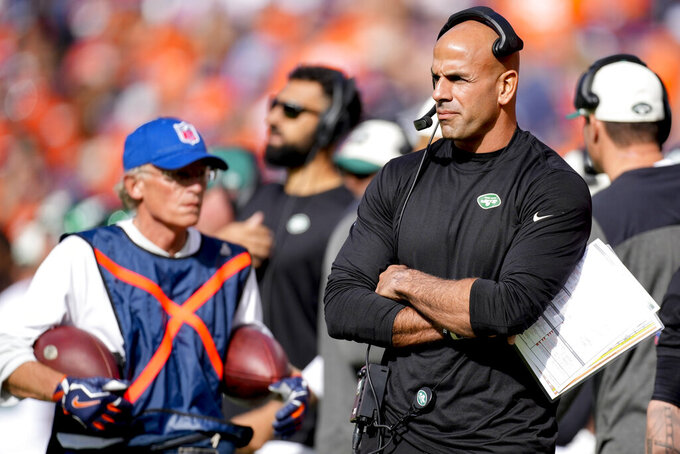 OPENING LINE: Patriots by 2 1/2, according to FanDuel Sportsbook.

TURNOVER DIFFERENTIAL: Patriots minus-2; Jets plus-2.

PATRIOTS PLAYER TO WATCH: LB Matt Judon. He has easily been New England’s most explosive defensive player and is coming off a season-high 2 1/2-sack performance against Chicago. His 8 1/2 sacks lead the league and he has failed to get a sack only once this season. When asked about Judon's season, Jets coach Robert Saleh called him a “freakazoid.”

JETS PLAYER TO WATCH: WR Elijah Moore. The second-year wide receiver returned to the Jets this week after requesting a trade last week because of frustration over a lack of playmaking opportunities. He was kept home for the game at Denver, but Saleh insisted things are OK with Moore, who has just 16 catches after having 43 as a rookie.

KEY MATCHUP: Patriots run game vs. Jets D-line. Rhamondre Stevenson is off to a good start for New England, leading the team with 487 yards rushing and four TDs, but the Patriots' O-line has some issues — namely center David Andrews being in the concussion protocol and out this week after taking a blindside hit in the loss to Chicago on Monday night. Meanwhile, the Jets' defensive front has been stingy this season while allowing just 3.9 yards rushing per attempt.

KEY INJURIES: In addition to Andrews being sidelined, Patriots safety Kyle Dugger was dealing with an ankle injury and defensive lineman Christian Barmore had a knee issue. ... Jets wide receiver Corey Davis injured a knee during the win at Denver and was ruled out Friday for the game.

SERIES NOTES: The Patriots have won 12 consecutive meetings, with the Jets' previous victory coming in Week 16 of the 2015 season, when New York won 26-20 in overtime at home. ... The Jets' past two wins over the Patriots have come at home — and both in overtime — including the game in 2015 and a 30-27 win in 2013. ... New England coach Bill Belichick has a 34-10 record against the Jets. ... The teams have squared off in the playoffs three times, with the Patriots winning two of the meetings — both wild-card games. The Jets' lone postseason win over their AFC East rivals came in a 2010 divisional-round game.

STATS AND STUFF: With 324 total wins, including the playoffs, Belichick is tied with Bears founder and former coach George Halas for the second-most wins by a head coach in NFL history, trailing only Don Shula (347). Belichick can claim sole possession of second place with a victory. ... Belichick is 99-38 in the regular season against the AFC East as coach of the Patriots. ... Second-year QB Mac Jones is expected to start after struggling in his return to the lineup Monday night when he played only three series, threw an interception and got benched in favor of backup Bailey Zappe. It was Jones’ first game action since he sprained his left ankle late in New England’s loss to Baltimore on Sept. 25. ... Stevenson has averaged 6 yards per carry twice this season. The previous Patriots player to do it three times in a single season was Dion Lewis in 2017. ... WR DeVante Parker is second in the NFL with a 21.4-yard receiving average. Buffalo’s Gabe Davis is first (27.4). ... DB Jalen Mills has two interceptions, one shy of his career high set in 2017 with Philadelphia. ... DL Deatrich Wise has five sacks, tying a career high. ... S Devin McCourty is one of four active players with at least 30 INTs. ... At 5-2, the Jets are off to their best start since 2010 — the most recent time they made the playoffs. Their previous 6-2 start also came that season. ... New York is looking for its first five-game winning streak since 2015. ... QB Zach Wilson has not thrown a TD pass in any of the Jets' past three wins. New York has focused on a run-heavy offense, which has scored eight TDs on the ground during that span. ... The Jets' offense has struggled on third down, converting just 32.7% of those situations — ranking 29th in the NFL. That includes New York going 3 for 14 at Denver, a week after going 1 for 11 at Green Bay. ... Rookie CB Sauce Gardner leads the NFL with 12 passes defensed, including three against the Broncos. He was selected the AFC defensive player of the week for his performance at Denver. Gardner is the only rookie since 2000 to have at least one pass defensed in each of his first seven games. ... DE Carl Lawson is tied with Judon for second in the league with 15 quarterback hits, trailing only San Francisco's Nick Bosa (17). ... The Jets will induct former LT D'Brickashaw Ferguson into their Ring of Honor during a halftime ceremony. Ferguson was a first-round pick in 2006 who made three Pro Bowls and never missed a practice or game during his 10-year NFL career.

FANTASY TIP: This could be the week to reinsert Jets RB Michael Carter into your lineup. He’ll likely see an increase in touches with rookie Breece Hall out for the season. New York acquired RB James Robinson from Jacksonville to help make up for the loss of Hall, but it’s uncertain how much work he’ll get Sunday in his Jets debut. Carter provides a solid dual threat out of the backfield — key for PPR leagues.