Belichick says he was unaware of filming at Bengals' game 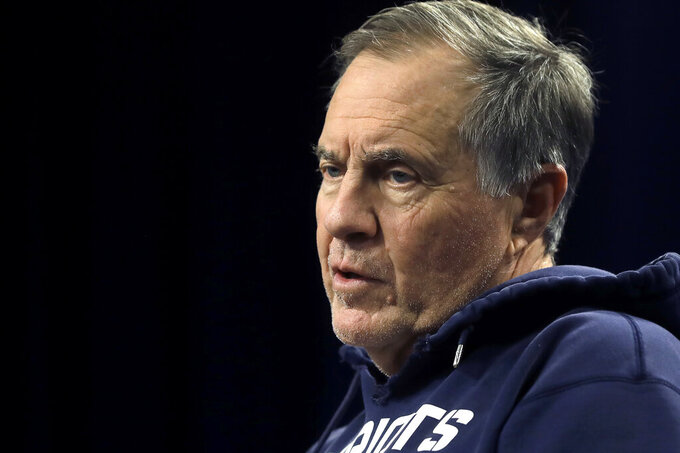 FOXBOROUGH, Mass. (AP) — New England Patriots coach Bill Belichick says neither he nor his coaching staff has watched any video footage shot by an in-house production team now at the center of an NFL investigation for inappropriately filming the Cincinnati Bengals’ sideline at a recent game.

Belichick said during a conference call Tuesday he was not involved and had no knowledge of what took place during Sunday's Bengals-Browns game in Cleveland. Belichick said he wasn’t informed of it until Monday afternoon.

“I personally have never viewed any video footage at all, anything that those production people have done, other than what’s shown on public television or something like that," Belichick said.

In a statement posted on Twitter and the team website Monday night, the Patriots said a three-person crew producing a web series titled “Do Your Job” “inappropriately filmed the field from the press box” as part of a feature on the scouting department. The filming took place “without specific knowledge of league rules,” the statement said.

An NFL spokesman declined comment. Bengals coach Zac Taylor confirmed during a news conference Monday that the league was investigating the crew’s activities.

The incident could be addressed on Wednesday when NFL owners convene for their previously scheduled winter meeting in Irving, Texas.

The Patriots’ statement said that while they were granted credentials for the crew from the Browns, “our failure to inform the Bengals and the league was an unintended oversight.” When confronted, the team said the crew “immediately turned over all footage to the league and cooperated fully.”

The Patriots said the purpose of the filming was for an illustration of the work team advance scouts do while on the road. The team says it accepts full responsibility for the crew’s actions.

New England was fined $250,000 and lost a first-round draft pick in 2007 for violating NFL rules against using video to steal signals in a scandal dubbed “Spygate”. Belichick was also fined $500,000.

Spygate fueled a distrust of the Patriots that persisted when the team was accused of illegally deflating the footballs used in the 2015 AFC championship game.

The punishment by the NFL in that case was also severe. Quarterback Tom Brady was suspended four games, and the team was fined $1 million and docked another first-round draft pick.

If the NFL does decide to discipline the Patriots for this latest incident, the previous Spygate episode suggests that it likely would be issued swiftly.

The Patriots were penalized for Spygate less than a week after the allegations first were reported in September 2007.