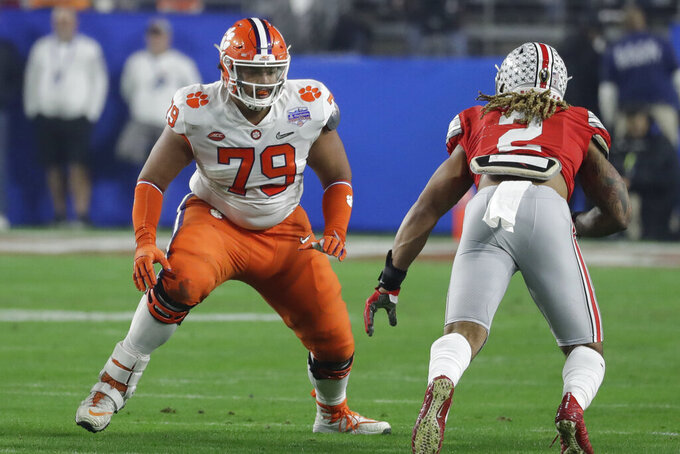 FILE - In this Dec. 28, 2019, file photo, Clemson offensive tackle Jackson Carman (79) looks to block during the first half of the Fiesta Bowl NCAA college football game against Ohio State in Glendale, Ariz. The Cincinnati Bengals got some help for their offensive line Friday night, taking Carman with their second-round pick in the NFL draft. (AP Photo/Rick Scuteri, File)

CINCINNATI (AP) — The Cincinnati Bengals focused on their lines during this year's NFL draft. If they got it right, Joe Burrow should enjoy much better protection in his second season.

Burrow, the top overall pick in 2020, had his rookie year cut short when his pocket collapsed on him during a Week 11 loss to Washington, resulting in a season-ending knee injury.

The Bengals continued to build around their quarterback in the draft, reuniting him with one of his favorite receivers at LSU and adding three more offensive linemen among their 10 picks.

Cincinnati took star receiver Ja'Marr Chase at No. 5 overall — passing on elite Oregon tackle Penei Sewell — and traded back in the second round before taking versatile Clemson lineman Jackson Carman. It grabbed East Carolina tackle D'Ante Smith with the last of its three fourth-rounders, and selected Georgia center Trey Hill in the sixth round.

Chase and Burrow already have big-time chemistry. They were teammates in 2019 when LSU won the national championship, Burrow got the Heisman Trophy and Chase took home the Biletnikoff Award as college football's best receiver.

Chase, who opted out of the 2020 season, gives the Bengals another exciting skill player and deep threat that has been lacking since A.J. Green was in his prime.

Thanks to the deep class of offensive linemen, Carman, one of the Bengals' top targets, was still available in the second round, even after they traded down eight spots to 46th overall.

Cincinnati is high on the 6-foot-5, 335-pound Carman, who is expected to come in and compete for a starting spot at guard. The addition of Carman, Smith and Hill comes after the team signed veteran tackle Riley Reiff in free agency.

“There's a bunch of guys in there that I feel really good about,” offensive coordinator Brian Callahan said. “I think our team is in a much better place now that it was even a year ago, and I'm really excited about the direction we can go. Obviously, the core of it all centers around (Burrow), so that's exciting to me.”

Cincinnati, last in the NFL in 2020 in sacks and among the worst at stopping the run, bolstered its group of defensive linemen.

The Bengals snagged edge-rushing specialist Joseph Ossai, who played linebacker at Texas, in the third. Then they took Tulane defensive end Cameron Sample, the defensive player of the game at the Senior Bowl, and another former Burrow teammate, LSU nose tackle Tyler Shelvin, in the fourth. They grabbed Kansas State defensive end Wyatt Hubert with their final pick in the seventh round.

The new guys will get a chance to crack a rotation that should include a now-healthy D.J. Reader and free-agent acquisitions Trey Hendrickson and Larry Ogunjobi.

Cincinnati took Florida kicker Evan McPherson in the fifth round to compete with Austin Seibert. McPherson, the first kicker off the board, hit 51 of 60 field goals and 149 of 150 PATs at Florida. He made four field goals over 50 yards last season.

Having parted ways with aging fixtures Green, Carlos Dunlap, Geno Atkins and Giovani Bernard, the Bengals continued to rebuild under second-year coach Zac Taylor. After being decimated by injuries to key players throughout the 2020 season — including Burrow — the Bengals should be better.

“I think that there just kept being value there that we liked, and we just kept adding competition,” Taylor said. “Our depth took a hit last year over the course of the year. It’s just the nature of the NFL season, a physical game, a physical division. So we don’t want to go down that road again. I don’t want to be there in Week 12 or Week 13 and we’re signing guys to walk in off the street.”

Burrow and top running back Joe Mixon (foot) should be healthy, along with tackle Jonah Williams, who was the team's best lineman before suffering a couple midseason injuries.

Reader (quad) and cornerback Trae Waynes (torn pectoral muscle), two of last year's big-money free agents, never got to make an impact because of their injuries.

"That’s two new additions to the team, even though they were both with us here last year,” defensive coordinator Lou Anarumo said.