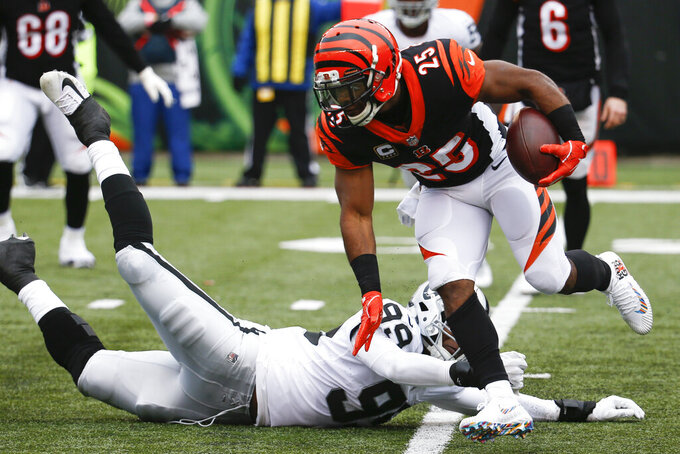 FILE - In this Dec. 16, 2018, file photo, Cincinnati Bengals running back Giovani Bernard (25) breaks a tackle from Oakland Raiders defensive end Arden Key (99) in the first half of an NFL football game in Cincinnati. The Bengals signed Bernard to a two-year contract extension Tuesday, Sept. 3, 2019, through the 2021 season. He could have become a free agent after this season. (AP Photo/Frank Victores, File)

CINCINNATI (AP) — The Bengals signed running back Giovani Bernard to a two-year contract extension Tuesday through the 2021 season. He could have become a free agent after this season.

Bernard, a second-round draft pick in 2013, has been used to complement Joe Mixon. Last season, he carried 56 times for 211 yards and three touchdowns. He also caught 35 passes for 218 yards.

Bernard is second in Bengals history for catches (265) and yards receiving (2,278) by a running back, trailing James Brooks. Bernard set a team record for a Bengals running back with 218 yards receiving against Arizona in 2015. He also has the second-longest touchdown run in club history, 89 yards against Carolina in 2014.

The Bengals open Sunday at Seattle.