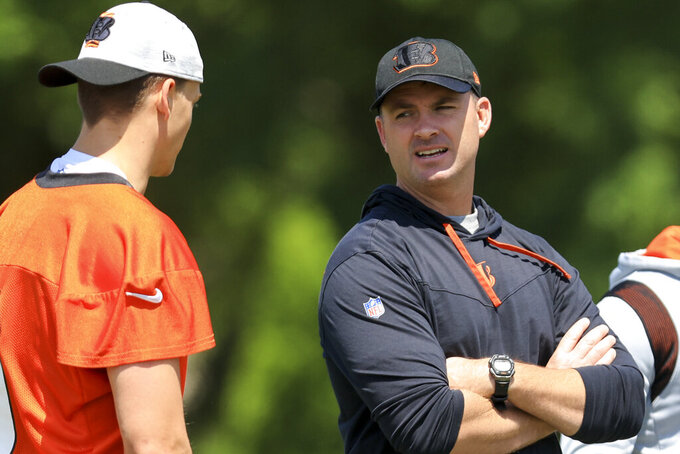 CINCINNATI (AP) — The confidence of the Cincinnati Bengals receivers was super-charged by their improbable run to the Super Bowl last season, and it's carried right into voluntary offseason workouts.

Last year Ja'Marr Chase overcame some early concerns about drops to break the single-season franchise receiving record with 1,455 yards and set rookie records for touchdowns (13) and receptions (81) on his way to being honored as the AP Offensive Rookie of the Year.

Tee Higgins grabbed 74 passes for 1,091 yards in his second season, and veteran Tyler Boyd had 67 receptions for 828 yards.

Cincinnati got hot late and rode the momentum all the way to the Super Bowl, where they lost 23-20 to the Los Angeles Rams.

“We were just hungry, and we still are,” Higgins said.

With quarterback Joe Burrow throwing the ball, the trio of wideouts believes the Bengals can start faster and be better overall in 2022.

“Now we just got to have the expectation that we are one of the best in the league, and we got to keep that expectation and roll with it,” Chase said. “I felt confident about how far we went last year. Honestly, if we’re being real honest, that’s all the confidence we need right there.”

In the penultimate week of voluntary organized team activities, the Bengals got to put on the helmets this week and face off in drills pitting receivers against linebackers and defensive backs.

Predictably, Chase and Boyd were favorite targets of Burrow, but Higgins continued to work on the side this week as he recovers from shoulder surgery. His absence has opened up opportunities for backups and undrafted free agents, including Kwamie Lassiter II, Jaivon Heiligh, Jack Sorenson and Kendric Pryor, to get noticed.

“It’s important that those guys become comfortable with what we’re asking them to do, so that when they come back in training camp and we’re going for real with the pads on and against different competitions, that they feel like they can play up to their potential,” coach Zac Taylor said.

“What I mean by that is there is no indecision as to where am I supposed to line up when I break the huddle, what route depth am I supposed to be at? They’ve got to get all that ironed out now, so that when they show up and they’re really competing for those roster spots, their full potential can shine through and it’s not the mental side that’s slowing them down. That’s the key as we come out of summer.”

Bengals receivers are hoping what happened in Vegas will translate into good things on the football field, at least in terms of building chemistry and camaraderie.

Chase, Higgins and Boyd, along with Thomas and Morgan, took advantage of a break in team workouts for a trip to Las Vegas on Memorial Day weekend, highlighted by a Lil Wayne concert.

“We try to have as much fun as we can, when we can,” Chase said.

Taylor deflected questions Tuesday about safety Jessie Bates III, a team captain who skipped the team workouts amid frustration over negotiations with the team for a long-term contract. The Bengals put the franchise tag on him in March.

“I’m not going to make any predictions with those guys. It’s all strictly voluntary right now," Taylor said.

“We love Jessie. The business part is the business part,” he said. “We have to continue to look forward and get our work done, and I think the guys have handled that really well.”