Bills' cup half full after 2nd-half eruption against Miami 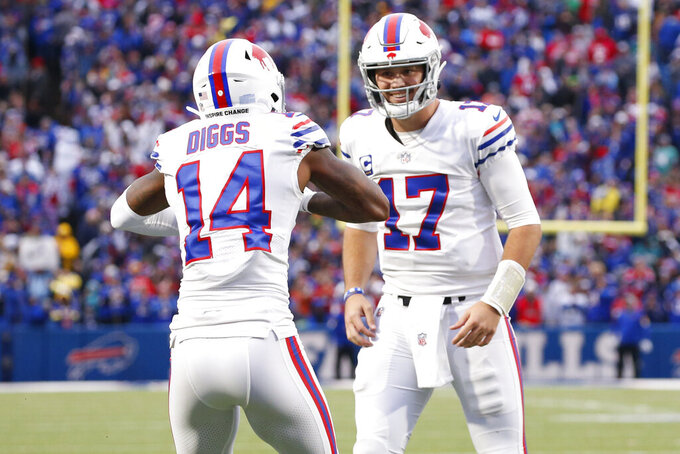 Buffalo Bills wide receiver Stefon Diggs (14) is congratulated by quarterback Josh Allen (17) after his touchdown during the second half of an NFL football game against the Miami Dolphins, Sunday, Oct. 31, 2021, in Orchard Park, N.Y. (AP Photo/Jeffrey T. Barnes)

ORCHARD PARK, N.Y. (AP) — Aside from the win, there is another bright side to the Bills’ opening-half struggles on offense against Miami.

As much as coach Sean McDermott would have preferred Josh Allen to find his groove long before the second series of the third quarter, he learned something more about his quarterback’s ability to fight off adversity.

“You don’t want to be in those games,” McDermott said Monday, a day after the Bills scored 23 points in the second half to secure a 26-11 win.

If an NFL season, as McDermott likes to preach, is about a growth process, the Bills took another step in maturity toward their ultimate goal of defending their AFC East title, returning to the AFC championship game for a second consecutive season and, hopefully, beyond.

Whether being rusty from a bye week off, or still stung by a heartbreaking 34-31 loss to the Tennessee Titans two weeks earlier, the Bills managed to shake off a first half in which they scored three points and generated just 122 yards offense and five first downs, to close with four consecutive scoring drives.

What remains to be seen is how much the Bills can derive from the victory.

It’s one thing to run up the score against the Dolphins, who have lost seven straight and are accustomed to second-half letdowns in having been outscored 134-75 over the final two quarters. It might be another when it comes to facing Tom Brady and the Tampa Bay Buccaneers, whom the Bills will play on Dec. 12.

At 5-2, the Bills are a difficult team as of yet to gauge in having padded their record against opponents who have gone a combined 8-31. Four wins have come against backups or starting quarterbacks with fewer than 16 games of NFL experience. The only exception was a 38-20 win over Patrick Mahomes and the Kansas City Chiefs in Week 5.

And Buffalo’s schedule won’t get much tougher over the next two weeks, with games at Jacksonville (1-6) and at the New York Jets (2-5) before returning home to face Indianapolis (3-5) on Nov. 21.

By comparison, the Bills' two losses have come against Pittsburgh (4-3) and Tennessee (6-2).

The Bills won’t apologize for their schedule, nor should they.

Rather than look too far ahead, McDermott maintained his week at a time approach when asked to rate how good his team is seven games into the season.

Third-down defense. Buffalo limited the Dolphins to convert four of 14 third-down opportunities, the 11th straight outing in which an opponent has been held under 50%.

A running attack in which Devin Singletary and Zack Moss combined for 47 yards on 15 carries, and were outgained by Allen, who finished with 55 yards rushing and a touchdown. Moss lost a yard while attempting to convert a third-and-1 in the second quarter.

Tyler Bass. The second-year kicker hit a 57-yard field goal with the wind at his back to open the scoring, and then hit a 39-yarder to put the Bills ahead 20-11 with 3:39 remaining. The sixth-round pick out of Georgia Southern is 16 of 17 on field goal attempts, with his only miss being from 53 yards.

Punt returner Isaiah McKenzie and punter Matt Haack. McKenzie muffed a punt inside Buffalo’s 10, with teammate Jake Kumerow diving to the rescue to push the ball out of the end zone for a touchback with the game tied at 3 early in the third quarter. Haack’s wobbly, 19-yard punt from Buffalo’s 46 in the second quarter led to the Dolphins tying the score at 3 on Jason Sanders' 51-yard field goal.

OL Jon Feliciano is week to week with a strained calf.

112 — Allen’s combined TDs passing and rushing (not including one receiving) which ties Johnny Unitas and Deshaun Watson for third-most by a quarterback through his first 50 games. Only Mahomes (135) and Dan Marino (118) had more over the same span.