Bills not content with first AFC East title in 25 years 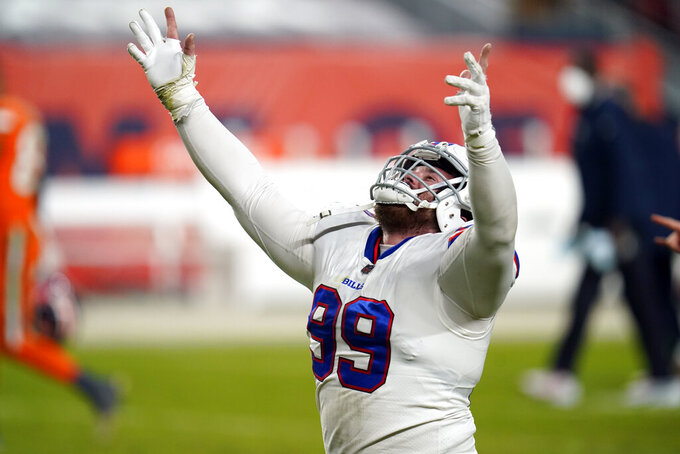 ORCHARD PARK, N.Y. (AP) — Defensive end Jerry Hughes was so caught up in the euphoria of the Bills clinching their first division title in 25 years, the team’s longest-tenured player missed what was printed on the front of the championship T-shirt.

Taking a sip of Gatorade following a 48-19 rout of Denver on Saturday, Hughes looked down at his chest and was left instantly impressed upon reading: “WON NOT DONE.”

“Coach is a brilliant thinker,” Hughes said, referring to Sean McDermott. “We already have achieved this milestone, and he’s already one step ahead, getting us ready for the next opponent. That’s how this team is. That’s why we’re able to accomplish such great things.”

The Bills (11-3) have won seven of eight to stop New England's NFL record 11-year run of division titles. They have an outside shot of finishing second in the conference by owning the tiebreaker over the Pittsburgh Steelers.

But qualifying for the playoffs is no longer measured as the standard for success in Buffalo. It is, instead, but one step for a team that was one-and-done in its previous two playoff appearances following wild-card losses to Jacksonville (in January 2017) and Houston this past winter.

“We still have a lot more to accomplish,” said Hughes, in his 11th NFL season and eighth in Buffalo.

This represents Buffalo’s most complete collection of talent since at least 1999 in a season that ended with the wild-card playoff Music City Miracle loss at Tennessee.

Ahead 16-15 following Steve Christie’s 41-yard field goal with 16 seconds left, the Bills allowed the Titans to score on the ensuing kickoff on Kevin Dyson’s 75-yard return, set up by a lateral from Frank Wychek.

What followed was the breakup of Buffalo's Super Bowl-era teams, with the Bills releasing eventual Hall of Famers Bruce Smith, Thurman Thomas and Andre Reed some six weeks later. And it launched what became a 17-year playoff drought, which ended in 2017.

Led by quarterback Josh Allen, the offense is producing at a franchise-record pace in numerous categories.

Buffalo’s defense has turned the corner from its early season struggles.

It’s allowing an average of 333 yards per outing over the past eight games, 54 fewer than its first six. And the unit is suddenly providing offense, scoring touchdowns in consecutive games after Hughes returned a fumble 21 yards against Denver.

“We’re going to enjoy this one tonight,” Hughes said. “But we know the job ain’t done.”

An offense that generated 29 first downs against Denver, and extended its franchise-record streak of 20-or-more first downs to 13 consecutive games.

The running back tandem of Devin Singletary and rookie Zack Moss combined for 149 yards rushing on just 21 carries and a touchdown. Buffalo topped 150 yards rushing for just the third time this season.

Left guard Ike Boettger was flagged twice for holding inside the Broncos 20.

McDermott said test results “aren't overly worrisome," in referring to WR Stefon Diggs, who had a foot injury evaluated in the fourth quarter. ... WR/Returner Andre Roberts did not return due to a back injury. ... OL Daryl Williams left with a groin injury.

The Bills enjoy an eight-day break before playing at New England on “Monday Night Football.” Buffalo defeated the Patriots 24-21 on Nov. 1.