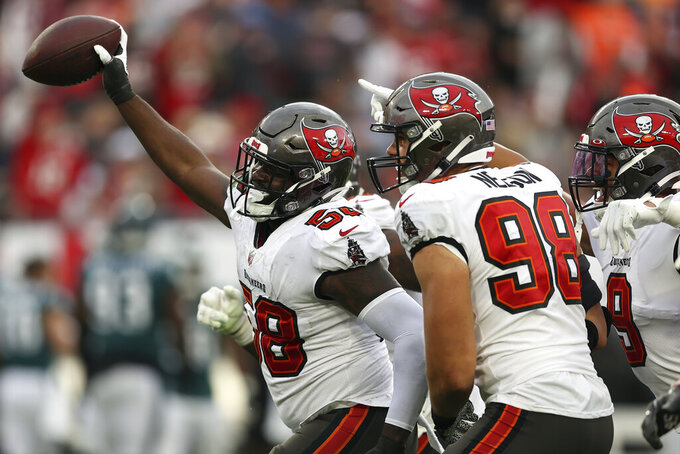 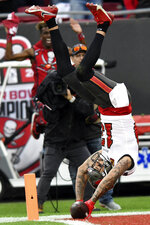 TAMPA, Fla. (AP) — As the game clock expired, Tom Brady raised his arms in triumph along the sideline, whirled and tossed a football into the stands.

The Tampa Bay Buccaneers and their jubilant 44-year-old quarterback took the first step on what they hope will be a journey back to the Super Bowl, dominating the Philadelphia Eagles 31-15 in a NFC wild-card playoff victory Sunday.

“It only gets tougher from here,” said the seven-time Super Bowl winner, who's trying to help the Bucs become the first team to repeat as NFL champions since the Brady-led New England Patriots won back-to-back titles in the 2003 and 2004 seasons.

Tampa Bay (14-4) set the tempo from the start, with Brady leading a pair of long TD drives in the opening quarter and building the lead to 17-0 by halftime.

The three-time league MVP finished off the Eagles with TD passes of 2 yards to Rob Gronkowski and 36 yards to Mike Evans, improving his dazzling playoff record to 35-11 in a record 46 postseason starts.

The Bucs defense did its part, too, intercepting Jalen Hurts twice in the Philadelphia quarterback’s playoff debut.

“We did some good things,” Brady said. “I think we’re just going to have to keep doing what we did today. Everyone’s got to touch it, make some explosive plays. Did a good job possessing it, the defense played great, so it was a great team win. Special teams played awesome — one of the best days we had on special teams all year.”

Brady completed 29 of 37 attempts without an interception while extending his postseason record for TD passes to 85.

But the Bucs had matters well in hand before the reigning Super Bowl MVP found Gronkowski wide open in the middle of the end zone to make it 24-0 midway through the third quarter. The 6-foot-5 Evans punctuated his TD catch for a 31-0 lead with a front flip over the goal line.

Brady targeted Evans 10 times, completing nine of the throws for 117 yards. He's 5-0 in postseason games since joining the Bucs in 2020 after 20 seasons with the Patriots.

The Eagles (9-9) scored on Boston Scott's 34-yard run and Hurts' 16-yard TD pass to Kenneth Gainwell both in the fourth quarter. A 2-point conversion trimmed Philadelphia's deficit to 16 with 4:45 remaining, but that was as close as it would get.

“This game does not define us, does not define who we are. We know all the different things that we’ve overcome. I know as a football team we’ll be back," added Hurts, who at 23 is the youngest QB to start a playoff game for the Eagles. "We’ll be back. This is a feeling that will kind of simmer in our hearts, simmer for us all.”

Giovani Bernard scored on a 2-yard run and Ke’Shawn Vaughn, a second-year pro filling in for injured running backs Leonard Fournette and Ronald Jones, covered the final yard of a 70-yard drive that put the Bucs up 14-0.

Brady led the NFL in passing yards, touchdowns, attempts and completions this season, but Tampa Bay gained the upper hand in this one by running the ball and keeping it away from Hurts and the league’s leading rushing attack.

The Bucs ran 25 plays to Philadelphia’s eight in the first quarter, outgaining the Eagles 137 yards to 17 and compiling an 11-1 edge in first downs.

It didn’t get much better after that, with a Tampa Bay defense fortified by the return of injured linebackers Lavonte David, Shaquil Barrett and Jason Pierre-Paul turning away Hurts’ most promising drive of the opening half with Mike Edwards’ end zone interception.

The Eagles won four of their last five games to earn the No. 7 playoff seeding in the NFC, however the turning point in their season came when running the ball became a focal point of the offense during the second half of a 28-22 home loss to the Bucs.

The Eagles ran for at least 130 yards in their next nine games, including seven in a row with more than 175. Hurt led the team with 784 yards and 10 yards rushing, becoming the eighth quarterback in NFL history to throw for more than 3,000 yards and run for more than 750.

Hurts finished his playoff debut 23 of 43 passing for 258 yards. He ran for a team-high 39 yards on eight attempts, with the Eagles finishing with 95 yards rushing overall — well below their season average of 159.7 per game.

“I didn’t sense for a moment that the moment was too big for them. I just think we made some mistakes," first-year Eagles coach Nick Sirianni said. "We just didn’t make some plays. We didn’t coach good enough at the end of the day.”

Eagles: LB T.J. Edwards (elbow) left in the second half and did not return.

Buccaneers: While David and Bernard were activated from injured reserve, RB Leonard Fournette (hamstring) was not. With RB Ronald Jones (ankle) inactive, that created a bigger role for Vaughn. ... All-Pro RT Tristan Wirfs limped off with an ankle injury a little over a minute into the game. He returned briefly in the second quarter, before taking the rest of the day off.

Eagles: Enter offseason with lingering questions about whether Hurts is the answer at quarterback moving forward.

Buccaneers: Host NFC divisional game next Sunday afternoon against the winner of the Cardinals-Rams game being played Monday night.