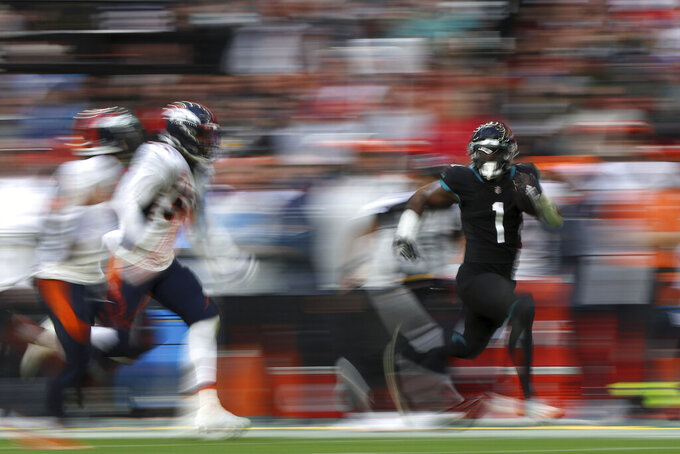 LONDON (AP) — The Broncos offense has stalled all season so expectations were low when a punt left them on their 2-yard line, trailing the Jacksonville Jaguars at Wembley Stadium.

Embattled quarterback Russell Wilson delivered a message in the huddle.

“I told the guys ’hey listen we’re going to go 98 yards right here. Believe in it,” Wilson said. “Every season I've ever played, you’ve got to catch momentum. There’s a moment in time where it clicks.”

Melvin Gordon scored on that drive early in the second half, and Latavius Murray took it in from 2 yards late in the fourth quarter to help the Broncos snap a four-game losing streak by beating the Jaguars 21-17 on Sunday.

Wilson led two go-ahead scoring drives in the second half on his return from a hamstring injury. He finished 18 for 30 for 252 yards with a touchdown and interception.

Wilson looked rusty early, but connected on a 47-yard completion to KJ Hamler after the Broncos fell behind 17-14 on Travis Etienne's 1-yard touchdown run with 3:54 to play. Wilson then scrambled for 10 yards on a third-and-5 to get to the Jacksonville 18.

The late score gave Murray a touchdown for two different teams this month in London. He ran for a score for New Orleans earlier in October at Tottenham Hotspur Stadium.

The Broncos (3-5) erased a 10-point deficit on Jerry Jeudy's 6-yard touchdown reception in the first half and Gordon's 1-yard run to complete the 98-yard scoring drive. On the long drive, Wilson connected three times with rookie tight end Greg Dulcich, including a 38-yard completion to the 1. Gordon then ran it in to give the Broncos a 14-10 lead.

Broncos coach Nathaniel Hackett, who has come under criticism in his first year on the job, credited Wilson for shaking off the slow start.

“You learn a lot about a quarterback when they throw a pick,” Hackett said. “He got it out of the way early. He was able to rebound and come back.”

The announced attendance of 86,215 is the largest crowd in the history of NFL international games.

The Jaguars (2-6) lost their fifth consecutive game despite a career day from Etienne, who carried 24 times for 156 yards and a touchdown.

After Murray's touchdown with 1:43 remaining, Jaguars quarterback Trevor Lawrence threw an interception to K'Waun Williams at the Jacksonville 35.

Lawrence had a costly red zone interception on a first-and-goal from the 1 in the first half. Lawrence was 18 for 31 for 133 yards with a touchdown and two interceptions.

“I’ve got to look in the mirror. I’ve got to play better,” Lawrence said.

“It’s a relatively safe play. If it’s not there, and Trevor knows this, just throw the ball (away), just sail the ball and you’ve got two to three more downs to do whatever you want to do there.”

Wilson missed last week's game because of a strained hamstring and threw an interception on his second pass.

The Broncos didn't get their first first down until almost midway through the second quarter.

The Jags had opened the scoring when Lawrence found Evan Engram for a 22-yard touchdown pass in the first quarter.

The Jags had another costly red zone turnover for the second consecutive week. Last week, Etienne fumbled into the end zone in the 23-17 loss to the New York Giants. It was Lawrence's turn this week. Broncos safety Justin Simmons reached up and snatched the ball out of the air at the goal line with Jacksonville leading 7-0.

“I saw him rolling out. I’m hoping maybe there's a chance I can bat the ball,” Simmons said, doing even better by pulling the ball down for a crucial turnover.

The Broncos amassed 10 penalties for 71 yards in the first half, handing the Jags extra opportunities on offense. Simmons was whistled for taunting after a tackle on JaMycal Hasty but later in the drive he intercepted Lawrence for a touchback. The Broncos finished with 12 penalties for 81 yards.

“We’ve got to get that out of the game. We can’t do that,” Hackett said.

Jaguars return specialist Jamal Agnew was inactive for a second week in a row because of a knee injury. Jags safety Rayshawn Jenkins stayed down after tackling Jeudy in second quarter. Broncos center Lloyd Cushenberry III (hip) went down on Denver's final drive of first half and was ruled out. Graham Glasgow replaced him.

Broncos: Bye week and then at Tennessee on Nov. 13.

Jaguars: Host the Las Vegas Raiders next Sunday. They're at Kansas City the following week before their bye.